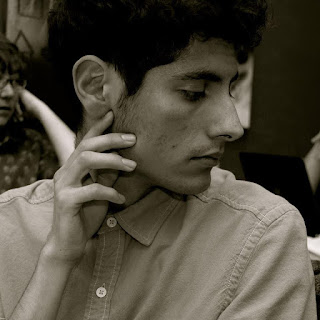 Current Town: Seattle, WA. But soon to be Minneapolis, MN.

A:  At this moment, my focus is on a brand new play that I wrote in the span of a month. I got that challenge from your blog actually! Previously, the fastest I've completed a first draft was three months; so your recommendation that the first draft of a play should take 3-4 weeks to write was an intriguing notion. The play I ended up writing was fueled by my overwhelming anger surrounding how certain individuals running for political office are portraying immigrants. Out of this rage was born a play with the working title TRUMP'D. Actually, my very first play CAPTIVITY was also about immigration and fueled by a similar feeling of rage. I guess it's just a subject that gets me fired up! TRUMP'D is being developed for a workshop production with Parley, a Seattle-based playwright group.

I've also got my very first mainstage production of a play called TERRA INCOGNITA coming up at Annex Theatre this summer. Annex is a well-known theater on the Seattle fringe circuit that places emphasis on producing new work by local artists. Since moving to Seattle, I've been wanting to work with them because they value risk and experimentation over a polished, commercial product. My dear friend and collaborator Pilar O'Connell is directing. We're about to head into workshop mode now; the show has been cast and I can't wait to hear my brand new draft with the actual actors who will be playing these roles!

I also recently completed the first draft of a play called LAS MARIPOSAS Y LOS MUERTOS. This play is my first commission and the first play that I'm writing that will feature musical numbers. I'm preparing to dive into a revision of the play and begin collaborating with the musicians who will be writing the original music.

Finally, I have a play called AT THE VERY BOTTOM OF A BODY OF WATER that's been in development with Umbrella Project, a Seattle-based new work advocacy group, for about 6 months now. It's gotten a series of readings and tireless dramaturgical support from the wonderful Gavin Reub. It's finally ready to have a showcase reading and I'm pumped about getting to share this beautiful baby with an audience!

So all that is happening before I leave Seattle to begin my year-long residency at The Playwrights' Center as a Many Voices Fellow.

A:  When I was 6, my father bought me multiple volumes of National Geographic on VHS. I would watch them obsessively. I recall the thrill of watching a cheetah chase a gazelle across the African savanna. That was drama. If the cheetah caught the gazelle that was satisfying but tragic. If the gazelle escaped the cheetah's grasp, it was satisfying and a relief...but still tragic.

Around that same time, we had a little dog named Blanca. One day, a couple of my uncles were doing some work in our backyard and left the gate open. A couple of neighborhood dogs, who were on the loose, got into our backyard and attacked Blanca. My final image of that little dog was my uncle removing her from under a bush where she was hiding. Her white fur was stained with bright red blood. Even now that I'm an adult, my uncle still apologizes almost every time I see him for the incident.

A:  The majority of productions would be new plays that are accessible and appealing to a more varied audience. I would like to see theater audiences that are truly reflective of the range of demographics that make up our community. I'm tired of being so aware of the fact that I am in the minority (in age, economically, and racially) when I look at the other patrons attending the theater.

A:  My mentors are my heroes. Seriously, I am so grateful for every teacher who has invested their time, experience, and knowledge in me.
Rod Menzies.
Patrick Pearson.
Caridad Svich.
Elizabeth Heffron.
My current playwriting mentor Rebecca Tourino Collinsworth is a paragon of grace and tenacity. She is the busiest person I know and yet she always finds time for me. She creates a safe environment that promotes risk-taking and ensures that each piece is deeply personal. I've written seven full-length plays with her mentorship over the last three years.

And then, of course, my first playwriting teacher, Susan Merson is one of my greatest theatrical heroes. I wouldn't be writing plays if it weren't for her. She encouraged me to apply to New York Theatre Intensives for their six-week summer conservatory in 2011; I was awarded a full scholarship for tuition and housing. While in New York doing the program, one night we got to have dinner with friends featuring Donald Margulies. Susan calls him "Donny." There was a small group of us sitting around him in Susan's apartment. There were two things in particular that he said that have stayed with me to this day. First, he said NOT to obsessively rewrite your plays on your own; either someone will respond to the bones of your play and want to develop it with you or it's time for you to write the next play. Second, he said that even after DINNER WITH FRIENDS won the Pulitzer, that there are adjustments he would want to make to the play now.

A:  Well, I can tell you what I've done as a young playwright:
1) I carry my Moleskine with me everywhere. When inspiration comes, I scribble it down. It might be an image, a character, a line of dialogue. I have to get that stuff down right away or risk having it just float away.
2) I prioritize writing the story I NEED to tell rather than something I just WANT to tell.
3) I've consistently taken playwriting classes with different instructors. The more perspectives and tools that I'm exposed to, the more exciting my writing process becomes and the more surprising the resulting work is.
4) I seek opportunities to collaborate with other artists that feel an affinity with the type of art I want to create (and vise versa). These collaborators are a community of playwrights, actors, dramaturgs, and directors who inspire and support my vision -- and, hopefully, they'd say that I do the same for them.
5) I read plays then go see them in action.
6) I read Jose Rivera's 36 ASSUMPTIONS ABOUT WRITING PLAYS over and over again.

A:  Parley is presenting the workshop production of my newest play TRUMP'D at West of Lenin on May 17th:  http://www.parleyproductions.com/

The world premiere of TERRA INCOGNITA will run from July 29-Aug 20 at Annex Theatre:
http://www.annextheatre.org/2016-season/main-stage/terra-incognita/

Finally, AT THE VERY BOTTOM OF A BODY OF WATER is in development with Umbrella Project:http://www.umbrellaprojectnw.org/