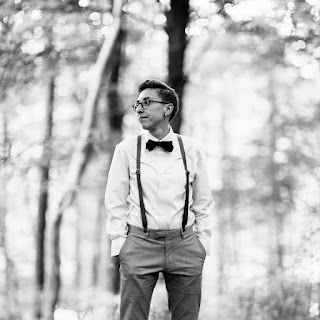 A:  I’m currently finishing the first full draft of a brand new baby bird of a play called Azul that I’ve been trying to figure out since graduate school (and probably before). Azul spans 60 years and tells the story of a Cuban-American woman, Zelia, and her Cuban-born mother who develops Alzheimer’s and can no longer recall English. Zelia relies on her wife, a Puerto Rican woman whom her mother recognizes as her Tia Nena who remained in Cuba during Castro’s rise to power, to serve as translator, as she descends into the history of her family legacy.

I’m about to enter rehearsals for a new TYA play, Flor to Somewhere, with Peppercorn Theatre Company and Rebecca Cunningham (my “artner” and director for life). It’s a play about a Mexican-American girl who dreams of becoming the greatest rocket scientist in the history of the world. I’m pretty stoked about it.

Meanwhile, my composer collaborator, Brett Macias, and I are continuing to develop our epic musical Gumbo. The show is a take on the Orpheus and Eurydice myth set in the wake of Hurricane Katrina. We’ll have excerpts featured at the PiTCH at the Finger Lakes Musical Theatre Festival this summer.

I’m also working on expanding a short play I wrote called Mother of Two (featured in EST’s MotherBRUNCHer this past May, directed by Matt Dickson) into a pilot and possibly a full-length play!

And, of course, there are the other various pending projects in various stages of draft and development that may or may not (apps in, fingers crossed) see the light of day. I’m also in the very beginning stages of researching what I hope will become my second novel.

Keep an eye on my website for updates at cquintana.com

A:  When I was in middle school, I went to the supermarket (Winn Dixie, before the days of the beloved Rouse’s) with my mom wearing a chef’s hat. I believe it was part of a Halloween costume at some point, but to be honest, I have no idea where I picked it up. To clarify, it wasn’t Halloween or Mardi Gras—just a normal weekday. My mom urged me to leave the hat in the car, but I wanted to wear it. And wear it I did.

When we were checking out and I was helping bag groceries, the cashier—assuming I was one crayon short of a box—crooned, “Well, aren’t you a special little helper?”

While it may not be obvious what this story means besides the fact that I’m a bit of a loon with a flair for the dramatic, to me it says, “if you can’t bring ‘em to the theater, then bring the theater to them!”

A:  I would make it really and truly for everyone.

A:  My theatrical heroes are the endlessly talented people in places across America and the world who persist upon getting up in front of audiences and making theatre for love and little else. Two bright lights who come to mind are Becca Chapman of the Elm Theatre and James Bartelle of the NOLA Project in New Orleans, Louisiana.

A:  Theater that pulses with what is true. I often see work that satisfies my head, but not my heart—and to me, that will never be enough. Give me a big beating heart of a play and leave me puzzling over it for days—that’s a win.

I’m also a sucker for the wild, the bold, the theatrical. Why does this play exist on stage and not on Netflix? Show me! There’s nothing quite like being surprised by something that happens in a play or piece of theater...

A:  Find the words and the people that mean something and hold tight.

There are two wonderful quotes by badass women that don’t say all of it, but a lot of it—and have helped me in the low moments:

“There is a vitality, a life force, an energy, a quickening that is translated through you into action, and because there is only one of you in all of time, this expression is unique. And if you block it, it will never exist through any other medium and it will be lost. The world will not have it. It is not your business to determine how good it is nor how valuable nor how it compares with other expressions. It is your business to keep it yours clearly and directly, to keep the channel open. You do not even have to believe in yourself or your work. You have to keep yourself open and aware to the urges that motivate you. Keep the channel open.” --Martha Graham

(You can read the full Danai Gurira piece here.)

A:  For the NYC contingent:

Tara by Brian Otaño, directed by the most wonderful David Mendizábal of The Movement Theatre Company (TMTC), on Mon, June 13 at 3:30pm as part of Page73’s Interstate 73 program.

For a summer road trip:

If you happen to find yourself in Winston-Salem, North Carolina this July 8 through 17, don’t miss Flor to Somewhere, a new TYA play I wrote, directed by Rebecca Cunningham, and produced by Peppercorn Theatre Company.

Also, if you land in Auburn, New York June 30 through July 2, come check out some fresh excerpts from Gumbo, a new musical with music by Brett Macias and book/lyrics by me, directed by Jerry Dixon in the PiTCH at the Finger Lakes Musical Theatre Festival.

For a beach read:

Here Comes the Sun by Nicole Dennis-Benn will be released this July. She’s brilliant and I’m certain the book will be, too.

And last, but not least: check out my forthcoming chapbook of poetry, The Heart Wants, from Finishing Line Press.