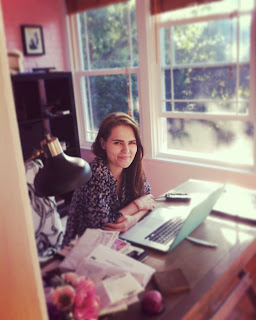 A:  Rewriting my play TROLL, which I’m producing in Chicago this summer at Trap Door Theatre. I’m also trying really hard to write new stuff, which has been crazy hard to do since graduating last June. I’m a little worried I forgot how to write plays!

A:  My mother’s parents immigrated to Canada from Ukraine, and Ukrainian was my first language. My mom signed me up for Ukrainian Scouts (like the Boy Scouts but co-ed…and everything you say/do is in Ukrainian) when I was five. When my mom and grandma dropped me off at my first overnight scouting camp in upstate New York, I immediately started sobbing and clung to the bumper of my grandma’s car as they drove away. I was the official crybaby/whiner-in-residence/sick-faker during that camp and every camp I went to (was forced to go to) until I turned 14. At 14, I developed a huge crush on an older scout who was super into all things Ukrainian, and though the crush faded soon, I became a sort of born-again Ukrainian and Ukrainian scout. I’m still active in the scouting community, and am a leader for a rad group of five 13-15 year-old girls.

In retrospect, I was incredibly lucky to go to those camps. At the time, though, my hatred of scouting and the total-body misery I felt being at camp lead to the penning of a vast assortment of wildly dramatic letters home to my parents. My earliest theatrical writing. Being immersed in Ukrainian language, culture, and music for a few weeks each summer played such a key role in shaping the artist and person I am today. I could ramble on about this forever. Thanks for indulging me!

A:  Producing plays featuring more roles –complex, weird, challenging, prominent, and stereotype-breaking roles- for women. Women of all ages and backgrounds and ethnicities, to be more specific. I know people are writing plays like this, but I don’t think they’re produced as often. Certainly not often in big theatres. I hate the idea that a play with a bunch of women in it -or a play chronicling a woman’s story- might be billed as a “woman’s issue play” or some sort of staged equivalent of a frothy beach read. UGH. I’d love to see a move towards showcasing plays that challenge the idea that only women can relate to other women or to certain subjects.

A:  The first play I ever saw that really electrified me was Daniel MacIvor’s Never Swim Alone at my high school in Edmonton, and I think that was the first time I realized that a play didn’t have to be hyper-realistic or linear. I love Sarah Kane and Sarah Ruhl. Suzan-Lori Parks, Federico Garcia Lorca, and Tom Stoppard are high on my list as well. Shakespeare might be my favorite, but that feels trite of me to say. Gonna say it anyway, though.

With regards to theatrical heroes who have had a direct and meaningful impact on my work: I had the incredible good fortune to study at Northwestern with Rebecca Gilman, who writes fantastic plays and is also great at pulling out the best work from everyone. I’m a total fangirl, obviously. Similarly, I’m a huge fan of Brett Neveu, Thomas Bradshaw, and Zayd Dohrn (who also happen to have been my professors at Northwestern) and whose plays I really admire as well.

A:  Hyper-theatrical, magical, poetic, spooky, sexy, political stuff. The weirder the better, unless there’s audience participation involved, in which case I am 100% out.

A:  Haha, oh man. I feel like I’m also still a novice playwright, so my advice would be like: “Hey! Let’s find an experienced playwright to give us both some advice!” I guess reading a lot of plays –a lot of different kinds of plays- is a good idea, as is just reading everything and anything: poems, long-form articles, Craigslist ads, the adoption profiles of shelter dogs in your area (the last one serves mostly to fuel your [my] dreams of adopting like 80 dogs).

Jose Rivera’s “36 Assumptions About Playwriting” is one of my favorite pieces of writing, let alone pieces of writing ABOUT writing. So read that too. And take a lot of walks. Walks are good for thinking and daydreaming and de-stressing. I walk about 10 miles a day. Otherwise, man. I don’t know. Like I mentioned earlier, I’m in a post-grad school writer’s block rut, and can’t seem to break out. Being okay-ish (but not complacent) with that kind of slump –and not getting too mad at yourself- is important, I think? Maybe? SOMEONE ADVISE ME!

A:  Well! TROLL –directed by the marvelously talented Melanie Keller- will be opening at Trap Door Theatre here in Chicago on Thursday, July 28 (running throughAugust 13). It’s a play about internet trolls, online lives, motherhood, marriage, and regret. I’ve written like three impossible things into the script, so it’ll be fun to see how we figure all of that out on stage!

TROLL is going up in conjunction with a bunch of pieces (readings/one-person shows/etc) related to the internet and online life. My friend Shawn Bowers and I are curating/producing the three-week shindig as the inaugural extravaganza of Fraud & Phony, the theatre collective we co-founded. There’s more info on my site: http://www.eaarcher.com/. Come see it!