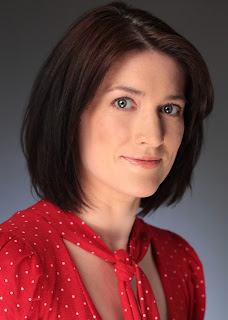 Hometown:  Jersey in the British Channel Islands, which are off the coast of France.

A:  I’m writing a new draft of a play called INTELLIGENCE about three American women diplomats role-playing in a Washington DC conference room. The play just had a 29 hour developmental workshop with New Georges as part of their Space JAM festival at South Oxford Space. At the end of the workshop, Jess Chayes directed an intense semi-immersive reading of the play and I’m excited to process everything we learnt in the room. There’s a scream in that play that symbolizes for me the process of making raw work with actors.

And I’m still on a high from the Ingram New Works Festival at Nashville Rep, where I have been in a lab residency for the past year developing my play THRILL DAY. It’s a play about the Victorian craze of wrecking steam trains at State Fairs and I enjoyed the process of hearing the play each month in Nashville with actors and writing off the discussions we had about race, sex, money and class.

A:  Growing up on a tiny island, my favorite place was a small secondhand bookshop. I was obsessed with books about journeys and knew I wanted to go see as much of the world as possible. I like the ethics of being a traveler: traveling light, taking risks, being engaged, being curious, recognizing that you’re the outsider and letting yourself be lost in another world. The desire to keep traveling has got embedded into my writing process and I’d love more opportunities to work internationally and do more cross-cultural collaborations.

A:  I am not a huge fan of readings done behind music stands and am always interested in other practical, low-key approaches to presenting material still in development.

A:  Being a member of The Jam, New George’s performance lab for early career writers and directors has been phenomenal. It’s amazing to experience such varied work being brought into the monthly meetings. I really appreciate the work Susan Bernfield and Jaynie Saunders Tiller are doing at New Georges in building databases of women artists and hosting networking events to help diversify creative teams.

A:  My attention is always grabbed by collaborative work that is trying to craft a distinctive aesthetic and isn’t afraid of being serious, assertive or sentimental. It’s great to follow a conversation set up by a writer or theatre group over more than one show and see creators refining their approach to material that they’re passionate about. At the opposite extreme, I’m also a sucker for big, spectacular theatre and opera. Top of my theatre bucket list is getting the chance to see for myself one of the floating opera stages at the Bregenz Festival on Lake Constance in Austria (link here with some stunning photos! http://twistedsifter.com/2011/08/outdoor-opera- on-the- lake-stages- of-bregenz/)

A:  I’m so excited to be working with composer Grace Oberhofer, director Colette Robert and choreographer Erik Thurmond on a choral play that will be opening the New Ohio’s Ice Factory 2016. We’ve got thirteen women singing some incredibly beautiful music and telling the story of how the Byzantine Empress Irene came to power during the ninth century Iconoclastic Wars. It’s a big, exhilarating piece and we’re thrilled to be putting so many women’s voices on the stage at once. You can check the show out at http://newohiotheatre.org/icefactory2016.htm and find out more about the Byzantine Choral Project at  https://www.facebook.com/byzantinechoral/