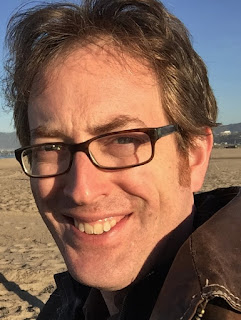 A:  I just finished a first draft of a play about Thornton Wilder’s writing of his first novel when he was nearly 30 and “stuck in the quicksand of teaching.” It shows how he discovered his voice as an artist and is also a sort of adaptation of the novel itself with characters in his life morphing into characters in the book’s episodic chapters. Meanwhile, I’m diving back into a slightly older play called The Reverend’s Daughter, about Civil War era college roommates from the North and South, based on a true story about a group of Southern students at Yale who raised a flag of secession on the college chapel spire. I’ve also got a TV pilot that I’m working on inspired by actress Amanda Quaid’s day job of teaching immigrants how to lose their accents. I continually return to other plays that I’ve written in the last ten years that haven’t received productions and/or been published yet.

A:  When I was 7 and my second grade teacher called my name for roll the first day, I answered her by saying, “I prefer to be called Jim.” Jim wasn’t my given name, or even a legitimate nickname variation on James (no variation of “James” is in my legal name). Weirdly, Mrs. Yee, every subsequent teacher, my parents, my grandparents, all the rest of my relatives, my friends, and then, loosely speaking, the world agreed to call me Jim. I’ve heard 7 is a typical age for such attempts at name changes. Mine stuck. It was my first act of friendly defiance that explains not only why I still go by Jim to everyone except for the government, but also why I became a writer. I wrote “Jim” into my identity.

A:  It would be spelled “theatre” consistently. I’m not an Anglophile, but there’s something nice about how the word looks when it’s spelled that way and, in this country, it distinguishes it from the movie theater. Also, I want all my plays to be produced and to be suddenly understood by all critics.

A:  When I was about 5, my mom brought me along to a city college acting class she was taking. Students were taking turns standing in front of the class and “making themselves vulnerable.” One man very calmly stripped off all of his clothes. I still remember the joy with which he pulled off his socks to fling them into the audience and the applause he received for it. He has been heroic to me ever since, even though I now think that getting naked in acting class is a little obvious. As for playwrights who influence me, Sam Shepard always has and always will. I emulate him in the way his characters’ speak in constant spirals towards a painfully indefinite center. When I was much younger, I imitated Mamet’s economy, too, though I have mixed feelings about him personally. I studied Arthur Miller, Eugene O’Neill, and Tennessee Williams, and felt their structural influence though none of them ever read one of my plays and Edward Albee did. He even wrote me a nice letter about it, which I photocopied and used to get into college. I like Edward Albee’s plays. I think Three Tall Women is the best Beckett play Albee wrote—which I mean as a sincere compliment to both writers. I also like Maria Irene Fornes, Caryl Churchill, and Suzanne Lori-Parks a lot and think of them as heroes because they manage to be precise yet lyrical with their power and style, and they take exciting risks that often pay off. I think of Tony Kushner as a hero, not just for Angels in America, but because he’s a great teacher of Brecht and an astute political speaker. I love Wallace Shawn. I got to sit next to him completely by accident, watching Mandy Patinkin in Rinne Groff’s play Compulsion at the Public. It was like My Dinner with Andre at the Princess Bride Reunion about Anne Frank. I still try to engage people in conversations like Wallace Shawn after that experience. He’s a great listener. It’s all in the head-tilt. I had a dream once in which I had to list my theatrical heroes and I talked about all those people above… and Schikaneder. I woke up wondering who “Schikaneder” was. Then I remembered. Emanuel Schikaneder wrote the libretto for Mozart’s Magic Flute. Papageno? The Queen of the Night? Zu hilfe, zu hilfe! He’s an unsung hero. Strike that. He is sung. Mozart just gets all the credit. Let’s hear it for the librettist!

A:  I am excited by overtly theatrical adult theatre in which characters manage to be both human and godlike. I like children’s theatre that isn’t condescending. Theatre presents an opportunity to be in an utterly unique relationship with living human beings, who are enacting a rehearsed ritual that is constantly adjusting depending on the audience, but it isn’t a religious rite, or a speech, or a presentation; it is a reflection of life itself as we live it, however distorted that reflection or disjointed our lives. I like theatre that takes full advantage of this opportunity.

A:  Don’t get too comfortable.
Take breaks when you’re tired.
Listen to people talking as much as possible. If you don’t enjoy that, don’t write plays. If you do, try to be anywhere near as amazing as that—and I don’t necessarily mean write naturalistically, just be true to the music of human speech in its essence.

A:  The Reverend’s Daughter has a staged reading coming up December 15 at Judson Memorial Church for their Magic Time series, directed by Rosemary Andress. Another play of mine, which shall be named when I decide which one to do, will have a staged reading through the Writers Theatre of New Jersey in their Soundings Reading Series at Fairleigh Dickenson University in January. Master Wilder and the Cabala will have a workshop and staged reading at the University of Illinois Urbana-Champaign this April with Henry Wishcamper directing. I also write and sing songs. Right now the fanciest recordings of those songs are available on the albums I made with my band The Randy Bandits, which can be found on iTunes, Spotify, YouTube, Amazon, and so on. Lately, I’ve been writing and singing songs as “The Jewbadour” for Tablet Magazine’s Unorthodox Podcast and I will be featured soon on the Ecumenical “Mockingcast” this November, talking about plays and singing songs. Speaking of podcasts, check out the recording of my play The Curse of Atreus on http://www.12peerstheater.org/modern-myths-podcast. And may I also recommend my tribute to Leonard Cohen at http://www.tabletmag.com/scroll/213694/to-be-leonard-cohen.