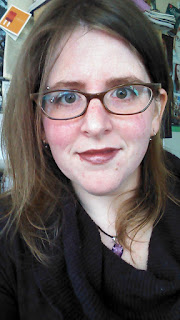 Q:  Tell me about The Lost Girls.

A:  The Lost Girls focuses on a group of young, queer women who just graduated college and have taken a $2000 stipend to be counselors at an all girls summer camp. It's 2008. Obama is running for president, but the election is a while away. The women are already in debt but haven't fully let that reality sink in. They have six months before Sallie Mae comes a callin' for their souls. None of them have started looking for a job, and again, it's 2008, so the jobs that they are likely going to get don't look promising. So naturally, it's a horror. And a comedy. No. Really. It's funny. The teenagers at the camp start dying under mysterious circumstances but the counselors are focused on getting wasted and hooking up with one another, and maybe eventually they'll get around to defeating the thing killing the teenagers. It now feels much darker with America electing Satan on Tuesday. 2008 may have been a terrible year for recent grads, but hope was around the corner; we just didn't know it.

A:  I'm currently at University of Iowa Playwrights Workshop and the script I'm working on for New Play Festival is about body/size politics focusing on a queer, fat woman who vomits out another being. But since Tuesday, like many artists, I'm thinking about what other stories we need right now. Like, I don't know, an exploration of what Mike Pence wants to do to women and queer people acted out in excruciating detail. But I feel like I'm still throwing spaghetti at a wall right now, cause of the rage. Soon something good will solidify and stick.

A:  I feel like a lot of theatre doesn't go far enough in exploring stories that are outside straight, white, and male sensibilities. As someone who likes to write female and queer focused stories that are normally structured outside of reality, I find it hard to sit through yet another play about a white dude struggling with cheating on his partner, or trying to woo an unwooable woman, or going through any emotional crisis revolving around being misunderstood. I'm over it and find it more than a little disturbing that those stories still dominate our stages. So if I could change one thing it would be that for one year theaters would commit to producing only queer, non-white, and/or non-cismale focused shows written by anyone but straight, white, cismales. (You can forward the hate mail to me.)
(But like seriously don't write me hate mail. It's not an unreasonable request given that we've lived in a world that has been dominated by those narratives and those storytellers for centuries. Just like it's not unreasonable to say we should have nine female justices on the Supreme Court. Or, a female president.)

A:  As someone who feels unqualified to give advice, I'll say don't be afraid to fail. Find your playground and go mess up, fall down, get bruises. Then regroup and do it better with harder falls and bigger bruises. Bruises are pretty.

A:  The Lost Girls runs for one more weekend in Seattle's Annex Theatre through Nov 19 (http://www.annextheatre.org/2016-season/main-stage/the-lost-girls/). And Iowa Playwrights New Play Festival happens the first week of May at the University of Iowa. Come down, over, or up and see ten new plays for free. Also my play Chaos Theory - a play seeking order came out in September from Original Works Publishing (https://www.originalworksonline.com/ChaosTheory).