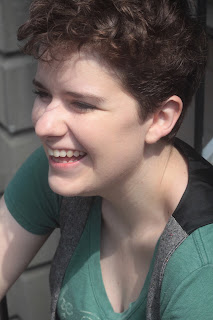 Q:  Tell me about your upcoming reading with FGP.

A:  For the better part of 2016 I've been working on my new play Dump City as part of Fresh Ground Pepper's Playground Playgroup. On December 13th at 9pm I will finally get to share where I'm at in the process with friends and strangers over at Cloud City in Williamsburg! My little blurb for it is "A festering rumination on city-dwelling told with a whiff of whimsy". It's a really fun, absurd piece of theatre that has also been a real challenge to write because it's sort of a tenuous dance between a completely heightened reality and more poignant, sobering truths about our current reality. Also, when you title your play "Dump City" I honestly feel like it becomes harder to convince yourself it's not total garbage, haha. But I've been really grateful for the support from Fresh Ground Pepper, my fellow artists in the group, and my director Kareem Fahmy, who have all helped me get this far in the process. All dump jokes aside, I sincerely believe in this play and it's relevancy here and now in this particular moment. If, like me, you've been feeling lost after the election, or in need of a good laugh, or just want to witness an honest and rousing attempt at rendering humanity at music stands, I invite you to join us on the 13th of December at Cloud City, 9pm sharp!

A:  After the reading I'm hoping to return to some "old" projects, namely a play about a family living in the future but the future as they predicted it would be back in the 50s and 60s (so think The Jetsons), and a certain queer doo-wop musical as well. BUT I've also been longing to dive into a new piece about the Sutherland sisters. They were a singing troupe of seven sisters who became unequivocal celebrities in the late 1800s, not really because of their singing but because of their ridiculously long hair that dictated a sort of long-hair craze during that time. Here is a picture of the sisters: 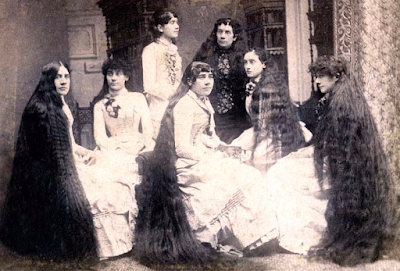 A:  I played make-believe during almost every recess in pre-school and elementary school. I suspect this activity marks a lot of theatre peoples' childhoods. While most of the other kids were out there playing basketball, or tether ball, or kick ball, or soccer... (ball), or tag, or jump-rope, or flower-crown making, my friends and I were utterly immersed in continuing story-lines about knights, or horses, or wolves, or Power Rangers, or the Brady Bunch (yeah, I dunno, I guess I had a thing for Marsha?). We got bullied sometimes for being "weird" but I don't remember that as well now. I just remember living for the various fantasies we created with our imaginations, and whenever I've questioned my decision to pursue writing as an adult I seriously think about what a weird little girl I was and how she is my inextricable truth deep down. Also, the more I think about it, the more I realize those strange, fantastical narratives I created as a kid were extremely formative, not only in shaping my writing-- both in style and substance-- as I know it today, but my sense of queerness and deep reliance on friendships as well.

A:  I recently happened upon this series of interviews in American Theatre Magazine where a bunch of playwrights and artistic directors around the country were asked what we, as theatre-makers, should do now in the wake of the election. I've been wondering a lot about this myself and it was greatly inspiring to read what some really smart, insightful people had to say. A lot of it was, of course, about hiring and making the work of minority artists more visible, which, as a queer female playwright I couldn't agree with more. But one thing that struck me, that several people mentioned in their responses, and that I now can't stop thinking about, is the accessibility of theatre from the audience's perspective. I've known for a while now that by living and making work in New York City I am relegating myself to a bubble of like-minded peers. And, in truth, I can't help but feel bolstered by the sense of community and open-mindedness here, which has made me feel so comfortable and enabled in sharing my work. But I've become simultaneously concerned about the breadth of people living in this country who consider theatre-making and theatre-going to be an elitist, inaccessible activity. I don't think they're necessarily wrong, I think there is a certain privilege involved in the making and attending of theatre that we cannot deny. I think it's unfortunate that capitalism has turned theatre into a product and because that product doesn't have the most immediate or practical effect on the market it can be easily cast aside as a frivolous luxury. And I think it's especially frustrating when I consider that a great many theatre-makers, myself included, don't want theatre to be this exclusive, artsy-fartsy commodity, and there are those out there who are already in the midst of trying to break down socioeconomic barriers and make new work in the unlikeliest of communities. I honestly don't know if theatre has the power to change people or the world, but I believe in it because its noble goal is to operate in service of the audience; it's an exchange that's meant to illuminate and complicate our humanity, not just for the artists involved, but for this whole diverse-thinking swath of people sitting opposite the stage. In the spirit of that, I think we have to insist on a change in audience now more than ever. In addition to a wider range of voices represented in this art form, we need a wider range of faces viewing this art form (which, let's be honest, these two things are at least partially interconnected). I don't have a suggestion for the best place to start with all of this. I'll be the first to admit that the last thing I want to do right now is leave my bubble and relocate somewhere new, and unknown, and in some cases potentially unsafe. But I also don't want to hide here, and hide my work from an audience that, though they may not whole-heartedly support it, might yet be informed by it, which might in turn better inform me. So, I dunno... If anyone wants to try to coordinate some kind of tour or something?... I'm all ears!

Ghosts (in no particular order):

A:  As you might guess from my previous answer about my childhood, I'm big into anything fantastical or unconcerned with maintaining 'realism'. I'm often really disappointed when I walk into a theatre, or the curtain opens, and the set is a very realistically crafted apartment or home interior. You can do anything with that space, your actors can be anyone in that space, why settle for the status quo? And sometimes I've been pleasantly surprised by plays that start out this way and then veer into weird, absurd, or simply unexpected territory. I just find that theatre is a medium unique from others mainly in its demand that the audience suspend their disbelief and let their imagination dictate what they're experiencing. Would you be satisfied with a movie or TV show where an actor sat in a chair, held their arms out in front of them and you were meant to understand they were in the midst of a high-speed car chase? But that can be achieved in theatre so brilliantly! So I love seeing work that embraces the level of abstraction that only something theatrical can delightfully render.

A:  Oh man, in many ways I feel like I'm still in my "just starting out" phase. Does my "emerging" badge come in the mail or...?

I guess if I had to say something, I would suggest creating a focal point or a little totem or something to endow with all your ambition and self-belief and hope. For example, the year I graduated from college and started freaking out about having a degree in theatre I made a somewhat impulsive decision to get a tattoo of a little star on the inside of my left wrist. The tattoo has a lot of nifty symbolism behind it but it's mainly there as a permanent reminder so that when the world is kind of spiraling around me and telling me to get a more secure job, or announcing that theatre is a dying art form, or showing me people in my life who are doing "better" than me, I can just look at this star on my arm and chill out a little bit, because it represents the only thing I'm really accountable to: myself. It's not about the journey my parents expect me to have, or society expects me to have, or really theatre as an industry expects me to have, it's about me doing my own thing in my own time and dismantling all the real or perceived pressures around me. That can be quite a task, and sometimes a tattoo isn't really enough. But I think, and I've found, it's important to have something to look to outside of yourself that helps you get back inside of yourself.

A:  Dump City will be read at Cloud City on December 13th at 9pm, see you there!