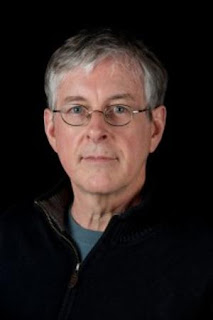 Q:  Tell me about 'Uncanny Valley'

A:  UNCANNY VALLEY draws on current research in artificial intelligence, robotics, and the possibility of “downloading” human consciousness as a means of extending the human lifespan, charting the relationship between Claire, a neuroscientist, and Julian, a nonbiological human. As Julian is “born” over the course of the play---first his head, then an arm, then both arms and his torso, and finally his legs---Claire educates him in techniques of being as human as possible: mirroring people’s speech, engaging in small talk, playing a musical instrument. Her goal is to overcome the “uncanny valley” effect by which people’s initial fascination with a lifelike artificial human inevitably transforms into revulsion. The play began in my dentist’s waiting room. Leafing through a magazine, I saw a photograph: a man in a chair facing a table, on top of which is placed a startlingly lifelike robotic head (Bina48, whom I “met” when the play had its premiere at Contemporary American Theater Festival in 2014). Arresting enough, but as I looked at the photo I found myself equally intrigued by the room surrounding them. Instead of a sterile laboratory, the two were in an incongruously old-fashioned parlor with carpet, a floor lamp, heavy drapes, and stenciled walls. Something about this photograph haunted me---maybe the disjunction between the turn-of-the-(last) century room, and the cultural stability it embodied, and the robotic head’s confident, self-possessed gaze.

A:  I’ve just finished a new draft of a play called DARK DAMOCLOID, a kind of fantasia about the prospect of mass extinction (ours)---a subject that haunts all our minds whether we acknowledge it or not. I’ve also started work on another play in a more realistic vein, dealing with the conflict between science and religion.


Q: If you could change one thing about theater, what would it be?

A:  If I were the All-Powerful King of Theater I would declare an immediate moratorium on dysfunctional-family plays that have no reference to the wider world. I find them, for the most part, formulaic, unsurprising, unimaginative, toothless, and boring. This would have the incidental effect of making literary managers’ jobs much easier, since about 90% of the plays in their to-read pile would disappear.

A:  Early on I was very influenced by the British socialist playwrights of the 70s: Edward Bond, David Hare, David Edgar, Howard Brenton, and so on. Also Samuel Beckett and Caryl Churchill.

A:  I like plays I haven’t seen before, plays that grab me by the collar, throw me against the wall, turn me upside down, and shake the preconceptions and unexamined assumptions out of my head.

A:  Resist the temptation to write autobiographical plays about your dysfunctional family. Imagine more interesting worlds and give them to us.

A:  UNCANNY VALLEY will have its Los Angeles premiere starting April 21 at International City Theatre, under the direction of artistic director caryn desai. Productions are also under way at Barter Theatre in Abingdon, VA, and Open Stage of Harrisburg.