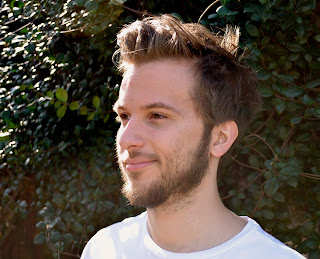 *But lived in Corpus Christi, TX, Tallahassee, FL, and passed many summers and winters in eastern Kentucky.

A:  Currently, I’m entrenched in a trilogy project, entitled Splintered in Three, that explores collisions between ethnicity and sexuality in my three cultural backgrounds. My father’s parents immigrated to the U.S. from Mexico and Austria, and my mother’s family has lived in Appalachia for generations. Right now, I’m in the editing and soon-to-be production phase of the second play, The Little Edelweiss; or, An Immigrant’s Fairytale, which charts my bisexual Great-Uncle Manfred’s journey from war-torn Linz to the United States, amid celebrity affairs and draft dodging and substance abuse, as he chased a white immigrant’s American Dream. In the play, I portray myself as well as my great-uncle in imagined scenarios (we never met in person by the time he died) and pursuits of pleasure. Other characters are portrayed through puppets and voiceovers. The play finished as a semifinalist for the Eugene O’Neill National Playwrights Conference this year, so my collaborators and I are now in the process of getting the production on its feet. We’re slated for a spring 2018 premiere in Houston.

The first play in the trilogy, Purple Eyes, looks at my Mexican identity and I’m currently touring the piece around Texas to theatres and universities (it’s the only one in the trilogy that’s a solo play). Purple Eyes is going to receive its world premiere at Stages Repertory Theatre next season. The third, Chocolate Gravy & White Jesus, explores my maternal Kentuckian roots. I’m just about finished with the first full draft of that one.

Outside of the trilogy, I just wrapped up work on a new ten-minute play, Ofélio, which is about a sexual assault between a graduate student and an undergrad. And I’m writing what is, as of now, a one-act play about two buddies, a straight guy and gay guy in their 20s, who take a road-trip across the Midwest. The working title is Bromos but we’ll see.

A:  I think I always had a penchant for storytelling as a kid. I asked a ton of questions (still do) and, tied to that, I was always curious about cultural origins. My Austrian grandma not only read me children’s fairytales from her homeland, but she would often tell me personal yet fantastical stories about growing up in Austria before the war. And my other grandmother, on my mother’s side, stitched me costumes based on movie characters. So between riffing on myths and dressing up (whether it was as Aladdin from the Disney film or Dorothy from The Wizard of Oz), I was constantly creating and telling stories.

A:  Hmm. I want to see more localized theatre that cultivates sustainable living opportunities for homegrown playwrights and other theatre artists. Right now, I’m serving as an associate producer for a Latina/o theatre festival that’s happening at Stages Repertory Theatre in February 2018. Our chief goal is to showcase and develop work that is of Texas. I want to see more things like this happening across the country. There’s no reason why Houston and other cities can’t be theatre hubs like NYC or Chicago.

A:  I started writing plays because of John Leguizamo and Virginia Grise. They made me see the value in personal narrative and writing about “home”—whatever that means to us. As I’ve continued writing, some of the playwrights I’ve looked up to most are Mark Ravenhill, Caryl Churchill, Cherríe Moraga, Tarell McCraney, Erik Ehn. All riveting voices in both American and British theatre.

A:  I enjoy theatre that makes me uncomfortable, that disturbs, that disrupts the way I think about the world. I like theatre that gives a voice to forgotten or erased histories.

A:  Thrive in the nuances. Keep everything you write. And produce your own work if no one else will.