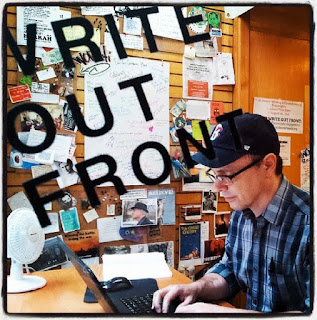 Hometown: Like John Coltrane, I was born elsewhere but grew up in High Point, NC.

Current Town: Like John Coltrane, I’ve lived six years in the area where Harlem and the Upper West Side meet. The similarities drop off sharply from there.

A: Martin has been a great champion of indie theater since before it was called that. During a dinner last summer in New Jersey, he started telling Aimee and me these incredible stories that I don’t think many people know. People who know and love him might not know his origin myth. People who don’t know him probably do not know the impact of his work. An injustice that must be rectified!

I interviewed Martin over several days just before the last big election and had a ton of material. Martin has so many good stories there was about 10 hours of audio of him talking about his formative years and covering theater over the last two decades. I took a staycation week from my Clark Kent job and started transcribing the recordings myself. But I got lost in thinking about how to portray him and putting things in context. My playwright, performer, editor, and producer brains were at war with one another by the end of that week. The despair was thick and I was very frustrated with myself. How would I ever get through this process?

The transcriptionist I hired sent me a 385-page doc of the rest. More material than can fit into a single evening of theater. I morphed that, along with conversations with other theater artists and my own experiences, into a two-hander. It takes place in the fall of 2014 in the West Long Branch apartment where Martin and his mother, Rochelle, moved. Martin gave me five pages of notes on the first draft, which helped the next one take a huge leap. I am pleased to say Martin has given the script his stamp of approval. I feel it has a good blend of material for those who do or do not know Martin.

I play Martin and a few other characters. Marisol Rosa-Shapiro plays Rochelle and many other characters. The style is like what might happen if a comedy duo were performing at a storytelling slam, with many indie theater tropes and devices sprinkled throughout for flavor. As I write this, I am still on the hunt for how to play Martin. I don’t want to do a caricature or impersonation because I want this character to be an authentic person presented on stage.

I wrestled with doing this piece considering what is happening now in the world. But I figured it is a service to do something at this time that is big-hearted and reminds people why making and experiencing theater in a room, with other people and no screens, is necessary.

A: Staying sane and healthy in this crazy time. Seeking positive ways to channel my fears and anger. Feeding my mind, body, and soul so I am ready and available to share what I have to offer in my life and my work. Getting comfortable with and fighting against maturity. Recognizing the value of forcing myself to have rest days. Failing at all of these things.

A: When I was very little, I had a red corduroy Superman cape made by an aunt. I would put that on and leap off the front porch over and over expecting to fly. For a second or two, I did.

A: Classism and bags of M&Ms. One or both contaminate many a night in the theater.

A: My partner in life and art Aimee Todoroff, who is directing Martin Denton, Martin Denton. Most of my other heroes are comedians and rock musicians.

A: Things where a lot of thought and care have shaped something brave and visceral. Events where I laugh deeply and unexpectedly are usually the ones that touch me in other profound ways. I like things that are entertaining and have a good deal of craft. More and more I’m running around to catch performers, companies, or spaces that are going away.

A: Your breath enters your body when it is needed, it is then released, and that is followed by a pause. That changes when it is observed or you do something to control it. There are many inconsistencies in life but these things remain true until your body no longer takes in breath.

A: Martin Denton, Martin Denton. Produced by Elephant Run District and FRIGID@Horse Trade. July 6 to 23 at the Kraine Theater, 85 East 4th Street. Also, the first season of the hERD Play Podcast Series will be released soon.www.elephantrundistrict.org.

The League of Independent Theater is endorsing a slate of arts-friendly candidates. If you are not a member and are reading this, please join and get involved. Indie theater is an important economic and cultural engine of NYC. Help make sure it stays that way. When they go low, we go local. www.litny.org.