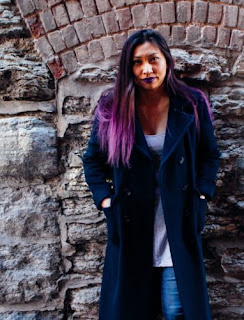 A:  For theater, I am further developing the second installment from the Kung Fu Zombieverse anthology of stage works. It's called Kung Fu Zombies vs Shaman Warrior and it examines mental health in a post apocalyptic world from the perspective of an Akha-Laotian woman. Through a Minnesota State Arts Board grant and a commission from the Smithsonian Asian Pacific American Center last year, I was able to focus on research and collaborate with a visual artist on a short animation for it. Fortunate to have received a Many Voices Fellowship from the Playwrights' Center this year to complete the work.

For my poetry life, I'm working on my Lao Survivors Project. I'll be interviewing ethnic Lao survivors of the Secret War in Laos, the Vietnam War's proxy war that was kept secret from U.S. Congress and the American people. From those interviews, I'll create poems. Then, working with a filmmaker, I'll produce video-poems. This particular project is being supported by a Loft Literary Center Spoken Word Immersion Fellowship and a VERVE Grant for Spoken Word Poets from Intermedia Arts.

Another very important poetry project is the Payne Avenue Poet Project. I will be spending my summer afternoons hanging out along Payne Avenue in Saint Paul to engage passer-by's and customers of our partner local businesses to develop a new body of work that celebrates Payne Avenue's people. The project will culminate in a block party-reception and feature posters of community poets and their poems.

A:  I had a fulfilled and balanced childhood. I helped my parents picked cucumbers in the few hours after dawn and then would get to explore the science museum with my parents later that day. I loved comic books, Saturday morning cartoons, Disney films, old Hong Kong martial arts films, anime, and Bill Nye the Science Guy. I read Isaac Asimov stories and was told Buddhist origins stories before bed time. I spoke three language growing up - and I'm thankful for that because it's helped me get an edge in poetry. So, I don't really have ONE story to tell to show how my aesthetic as a writer or person has been shaped.

I'm protective of my name, too. When I became naturalized as a U.S. citizen, I was asked if I wanted to change my name - probably to something more "American" - and I told her, "No." I also learned over the years to be patient with people who mispronounce my name and that I should take the few seconds needed to help them pronounce it correctly. My parents took almost two weeks after my birth to find my name. I can take five seconds to help someone pronounce it right.

A:  I'm still pretty new to theater. So far I've noticed two things: lack of diversity in acting pool and boring ass plays. I'd like to see more Asian American, specifically Southeast Asian Americans in theater. I would like for there to be a training program to cultivate new talent from those communities that are free of charge. I'd also like to see theaters and larger institutions to practice healthy risk-taking. Commission more new work from new voices. Theater Mu took a chance with me years ago with Kung Fu Zombies vs Cannibals. They invested two years of mentorship and resources to develop me, a newbie playwright with a story about the Lao people's history with war and trauma that was told through a Hip Hop score. As far as I know, I'm the only Lao American playwright in the U.S. (or at least in this region) and that is a huge disconnect, considering that there are approximately 246,000 Laotians in America.

A:  Theater that explores marginalized voices that are also written by those who are from marginalized communities. I don't believe in cultural or racial ventriloquism.

A:  Have a mentor. Take risks. Write the story you want to be told. Don't fear the consequences. Stay on the path. You will be shot down more times than you can spiritually handle but remain vigilant.

A:  I'm the Fan Favorite Guest of Honor at this year's CONvergence. It's a science fiction convention.
http://www.convergence-con.org/guests/saymoukda-vongsay/