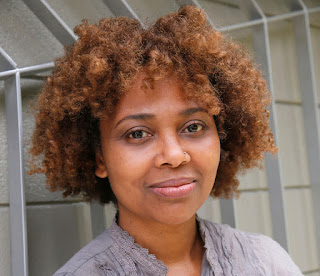 Hometown: Chicago. South Side. The Chi.

A:  At this moment, I'm writing songs for my play Black Super Hero Magic Mama. I had an idea to make it a play with songs and I fiddled around with lyrics during my last year of grad school. Now, I've got three weeks before we start my rehearsal period at the Eugene O'Neill Playwrights Conference, so I have time to play around with the work. It may not be a permanent addition; it may just be something I hear once in rehearsal and never want to hear again. But this path of exploration gives me an opportunity to stay productive while I'm here. I'm also rewriting a drama pilot, a comedy pilot, two plays, writing a screenplay, and writing a 10-minute play because I don't know how to do one thing a time. I'm still in grad school mode.

A:  When I was in 8th grade, I had a tape recorder that I'd use to create what I guess would be called "radio sketches." I'd play this DJ character, and I'd play all these other characters who'd call in, some with intertwining stories, and songs in between. It was quite complex, now that I'm looking back on it. I had no editing equipment, mind you. Just the tape recorder. So I'd record, and record, and if something wasn't right, I'd back up to that part and record over it. I'd take the entire day to make this "show," with absolutely no intention of anyone else ever hearing it.

That, I'm realizing, is how I navigate tasks even now. I create something with whatever tools I have at hand. The more tools the better. But if I don't have access to, say, editing equipment, I'll push on and make do with what I have in order to create the weird little thing that makes me happy.

A:  Adrienne Kennedy for working through her personal issues and America's racist issues in such a beautiful, poetic, and political way. Robert Wilson, Suzan-Lori Parks, and Tarell Alvin McCraney for having such a firm grasp on their own aesthetics. Stephen Adley Guirgis. I read one of his plays for a class in grad school, then I read all of his other plays that weekend. His dialogue makes me so happy. Tanya Saracho, Bekah Brunstetter, and Molly Smith Metzler for their fluidity, working in stage and television. That Easter episode of American Gods was everything. And a playwright did that. That's inspiring and gives me hope that I'll be able to have a foot in both worlds that I love so much (and that I might be able to make a living).

A:  I still hold that the boldness and danger of Chicago theatre is the best thing in the world. I always say, "They're not setting pubes on fire," if I see a staid play somewhere else. That's the standard I hold everything else to. I'm excited by fresh voices, modern language, hearing underrepresented perspectives. And theatricality! When a playwright decides that something impossible and surprising and magical is going to happen on stage, and then designers work to make that happen, that's incredibly exciting to me. In Rajiv Joseph's Archduke, an entire train comes onstage, then the whole freakin thing turns around to show you the inside of the train car?! Come on! Or Robert Askin's Hand to God. That's pubes on fire, right there.

A:  Ha! I am a playwright just starting out. What do I tell myself? Keep writing. Stop playing online boggle. Forgive myself for playing online boggle. Maybe online boggle is what allows me to gestate ideas. Play more online boggle. WAIT! How'd this happen? Seriously, see and read plays. Read lots of different kinds of plays. Experiment with styles as you find your own. Have in-home readings so you can hear your work aloud and find what's working and what's not. And get notes from people you trust to tell you the truth; not just the people who'll tell you that your shit don't stink. Those people are lying to you.

A:  I'm particular about the paper, although it's not expensive or fancy. I use these thin, lined notebooks. They're about 4"x6" and my favorites are the ones bound by thread (not stapled), maybe 50 pages thick, max. Each play gets its own notebook, with a different designs on each cover. I'm not picky at all about pen brands. A gel or a medium ballpoint, black ink. On the computer, I use Final Draft Courier. My title will get a unique font, depending on the story I'm telling.