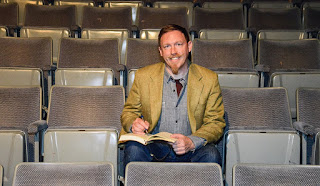 Hometown:  I was born in Lewes, in the United Kingdom (go straight south from London until you hit the coast - can't miss it!) - but New York City is where I really grew up.

A:  I always have a half dozen half-finished plays and screenplays, and I'll hammer away sporadically at one or the other until one of them suddenly reveals its intent, whereupon I write furiously on that one until it's finished... but my "official" current project is a new play The Lady Demands Satisfaction - a light hearted farce about a young woman whose estate will be forfeited to anyone who defeats her in a duel. There's a lot of ridiculous sword fights, a serving-girl who poses as a German Fencing master by donning a mustache, the actual Fencing Master who speaks no English and is assumed to be a servant... all the usual trappings. It won the 2017-2018 Joining Sword and Pen Competition, and opens in July of 2018 in Chicago. I've had a table read, and have the draft for an upcoming public staged reading just about ready. It's going through a "development process" - the kind of thing I usually eye dubiously - but this theatre company (Babes With Blades) I trust implicitly and love working with.

A:  When I was three years old, I read a book from the shelf in my parent's library - my first "grown-up" book. It had no pictures, so I knew it was for grown-ups. I selected it at random (well, at random from the books on the lowest three shelves, which were the only ones within reach). I remember it - "The Bafut Beagles" by Gerald Durrell, about his experiences catching wildlife in Camaroon... but here's the thing - I had no idea what that book was actually about until I read it again many years later. I sat there, on the library rug, poring over every sentence, every page, reading each word doggedly until I had finished the entire book - but I couldn't tell you what a single bit of it meant. I knew the words, I could technically read, but I was too young to comprehend any of it. I did it as an act of will, as proof that I was now able to read properly.

Today, a few decades later, I sometimes worry that I'm doing the same thing with my writing. I write what occurs to me to write, I string words together and people seem to like my plays, and produce them and publish them, and I get some very lovely compliments from the more discerning critics (anything negative I chalk up to the critic's incompetence, but we all have our defense mechanisms)... but do I actually have any earthly idea what I'm doing at all? What any of it means or is supposed to mean? I doubt it, sometimes.

A:  Public funding. There are countries where the government invests serious money into the arts, knowing that every dollar spent on a theatre brings in four to six to the surrounding businesses. Artists are cheap, we'll pour our hearts and soul into creating entertainment for a crust of bread and the promise of soup... and why city governments don't divvy up a few extra crusts for the return they get escapes me. It also keeps us dangerous free-thinkers off the streets and properly ensconced in windowless green rooms and insulated stages, which seems like a win-win for everyone involved.

A:  So many, but rather than pick one of the playwrights and creators I admire from afar, I want to choose someone that had a much more direct and profound influence, and someone that probably fewer have heard of: Worth Howe - an incredibly talented actor and one of those keep-the-whole-theatre-going AD/manager types. He ran a little community theatre on Roosevelt Island when I was a teenager. I built props and created special effects, ran the light board and sound board - did just about every backstage job throughout my high school years. I think most of us have worked at one of those theatres - everything on a shoestring, whatever works, whatever is needed... for a fifteen year old, it was the perfect amount of freedom and responsibility: "We need this. If you think you can do it, go do it, and make something that you're proud of on opening night." Worth needed every hand he could get to keep the place going, so I was immediately given as much to do as I was willing to take on after school. That was where I started... but what made this mean something was that the shows were good. Cheap, sure - rough around the edges - but there was real theatrical quality as well; and ultimately that inspires.

A:  There isn't one particular kind of theatre, it's more particular moments - that moment when you are elevated, transported; when the hair on the back of your neck rises. I've felt that watching broad, obvious crowd pleasers (Elpheba flying in Wicked, and the staging of the pond drying up in the opening of the second act of The Lion King on Broadway), and intense, actor tour-de-forces (Vanessa Redgrave in The Year of Magical Thinking, or Patrick Stewart as Prospero declaiming to the heavens during an actual, real live pouring-rain thunderstorm at Shakespeare in the Park that was some pretty amazing production value)... but I've also felt that in tiny black box theatres where the audience and the cast were about evenly numbered.

A:  Obviously, buy a complete set of my plays. You don't even need to read them unless you want to, but buy them. On Amazon. Full price, none of this used discount stuff.

Okay, now you've done that, there's probably a few other, better playwrights you should read too... if you can, see what's playing in your area, and read that play, then see it the next day. Start piecing together how the events on stage are set down on paper. How much is spelled out, how much is left for the actors to tease out as they work through their role; what stage directions are explicit, and what moments are discovered or added by the other collaborators in this art form. Read one, see it on stage, then read it again. If you're going to see a play of mine, shoot me an email and I'll send you the script.

A:  I have a leather-bound notebook I keep in my bag for ideas, remembered dreams, fragments of overheard conversations (inveterate eavesdropper), and notes from readings - held shut with a leather thong and a reindeer-horn bead I found in Alaska at a writer's conference. The paper is creamy, smooth, easy to write on. The paper, to me, is critical - if my pen drags and catches, that's one more tiny impediment to keeping up with the flow of words, and in the heat of things, I want nothing to get in the way. I use a Zebra F-309 with blue ink, and buy them by the dozen online as they seem to vanish like soap bubbles.

On the computer, I use Final Draft Courier for screenplays, and Times New Roman for plays - traditional; but, like the paper, I want no micro-impediments to anyone reading my work either. An unusual font is a tiny, tiny distraction when I want to draw focus on the words themselves.

A:  I post all my upcoming productions on my website www.arthurjolly.com each month - and have a whole bunch of monologues that can be downloaded free there, and breakdowns of all of my plays. If you're feeling a little blue, there's also a random compliment generator on the homepage to welcomes you which sometimes comes up with unusual combinations. Check it out!