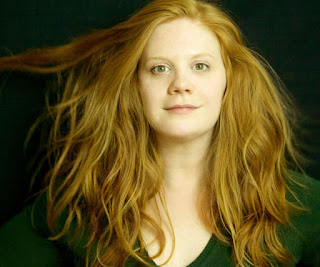 Q: Tell me about Greencard Wedding:

A:  Greencard Wedding (www.greencardwedding.com) is the first generative work I made, meaning that I had to write it myself for myself and my partner to perform. I had a band that had a member who lost his visa, which was really heartbreaking. So, I created a work that I thought would allow us to make a case for getting an artist visa; a love letter to our band and collaboration that used our music and was also very personal (and a live Skype call at the time). The whole thing ended up being bittersweet and not working out, though the show was touring quite a bit.

So I developed it into a play that is based on that experience, which (thanks to our incredible booking agent and sound/projections designer Martha Goode) I tour and perform with Ryan McCurdy. It’s essentially a scripted rock concert, with scenes that play out on stage as well as through films, (which we made on Skype, using Skype recorder). There are 9 songs we play, act with each other live on stage and as well as with the films (Morgan Zipf-Meister and David Anzuelo also appear in the films), so there are moments we have where we’re acting with a pre-recorded scene partner. It’s interesting because the film can’t change, you know exactly what response you’ll get from your on screen partner in those scenes, but from night to night our live responses can vary slightly. So it never feels locked, even though in a way it is, sort of in the way that long distance relationships can sometimes feel, I guess.

The show is interactive in many ways, we talk directly with the audience, do quite a few Irish toasts with them, teach them some Gaelic and serve wedding cake. It’s a bit like being at a concert and also seeing the personal story behind the scenes.

A:  AMP ( https://www.goodeproductionsnyc.com/amp ) is a unit of electricity, an abbreviation for A Modern Prometheus (a nod to the original title of Frankenstein) and the title of my new solo horror play about scientist Luigi Galvani's discovery of animal electricity in 1790 and how it informed the creation of Mary Shelley's Frankenstein as well as the development of electroshock therapy in the 1950's.

In AMP, Mary Shelley begins the process of writing Frankenstein on stage. Mary's monologues are interwoven with film interviews of a woman who auditions for the Boston Symphony during their first historic "blind auditions" and is committed to an asylum where she undergoes electroshock therapy to cure her of her ambitions.

Part of the text in this show is taken directly from the writings of Mary Shelley, Percy Shelley, Lord Byron, William Godwin, Mary Wollstonecraft, Luigi Galvani and medical journals. Many of these people are voiced by actors in the show through ghostly voice overs Martha Goode is creating (Ryan McCurdy as Percy Shelley, Chloe Dirksen as Mary Wollstonecraft, Jonathan West as Lord Byron and Finn Kilgore as a doctor in the asylum).

Some of the projections in AMP are photographs from abandoned asylums in NY and MA that I shot. It was different way to research a project. I wanted to feel terror, and understand more about the history of these places, what that meant for the people who had lived and died there. When you go to those places, in a way you are at their mercy. There’s a lot to prepare for, precautions to take and you never know what you will find. It may be uneventful or it may be charged. I was lucky enough to connect with Ashlynn Rickord at the Public Health Museum in Tewksbury, MA, who has been a tremendous resource. Visiting Tewksbury, MA also gave us a context in which to create a location for the films in the show.

Q:  Tell me about the Female Playwright Project:

A:  I like to work in many mediums; make theater/visual art hybrids. I work as a professional photographer (www.pfaphotonyc.com). Necessary Exposure: The Female Playwright Project is a portrait and sound installation I created, which seeks to bring visibility to playwrights who identify as female. There have been three very different installations so far, which have run for between 4 to 6 weeks in Dixon Place’s gallery and on iTunes. I have photographed 46 playwrights for the installation to date.

The first round of Necessary Exposure portraits used mixed media, a photograph and repurposed frame covered in materials from the playwrights work. This installation didn’t include audio recordings of plays but we did do a reading of an excerpt of each playwright’s work. The second installation was where sound was added; the portraits were more traditional and accompanied by excerpts of plays in the form of podcasts (designed by Natalie Johnsonius Neubert). We started doing a sight deprivation event to emphasize the absence of seeing the plays performed and allow a space for people to dream on producing them. Audience members come into the gallery, view the portraits, and then go into a dark theater, where they sit and listen to the sound designed excerpts in near darkness. The third installation happened right after Trump was elected. Those portraits are conceptual; the playwrights and I designed scenarios that speak to what it is to be making work at this time in history. Things like Leah Nanako Winkler turning her body into a protest sign and flashing Trump Tower on the coldest day of the year started to happen. Those podcasts were recorded and designed by Martha Goode and we also did a sight deprivation event.

All these portraits can be viewed and podcasts can be listened to anywhere in the world in the online gallery: https://thefemaleplaywrightproject.com/

A:  Ryan McCurdy and I have written music for the Climate Change Theatre Action, produced by The Arctic Cycle, which is a series of free performances in 41 countries in support of the United Nations Conference of the Parties (COP meetings). https://www.thearcticcycle.org/ccta-2017

I have a role in the film “Uniform” by Jeffrey James Keyes, directed by Ellie Foumbi and Michael Niederman, with Laura Gomez and London Peith. Laura and I play a couple whose 6 year old son is sent home from school for wearing a dress.

I’m also trying to bike more than I ride the subway or take cabs. Sometimes I succeed and sometimes I don’t.

Q:  Tell me, if you will, a story from your childhood that explains who you are as a writer or as a person:

A:  I think I’m still having it. We did a lot of hiking, camping and building things, fishing, telling stories and singing songs around fires. I was rarely treated like a little girl, or in a gender specific way. I don’t think that this was intentional; we were just busy working and playing in the dirt. I think growing up that way I felt comfortable in the world. Nature was an exciting unknown, an element that I got to collaborate with that often required creative solutions and more than one trade or method or skill.

A:  We would have more contact with our audiences. They would be more like guests in our home.

A:  There are so many. Ruth Maleczech, Joe Stackell, Clove Galilee all have a special place in my heart.

A:  Theatre that risks something personal against all odds and voices an essential truth, speaks to the political moment, connects with something outside of itself.

A:  Do it yourself but ask for help and thank those people like crazy. Ask more questions than there can be answers to satisfy. Everything is research. Try to listen objectively. Do what you can to spark your process everyday. Even small things count.

AMP is the recipient of a New York Society Library Grant and is going to be performing there Oct 29th and 3pm, and also playing at HERE Arts Center Dec 3rd- Dec 19th
https://www.nysoclib.org/events/amp-new-play-jody-christopherson
http://here.org/shows/detail/1947/

The Climate Change Theater Action is happening Oct- Nov 2017 and is free to take part in- https://www.thearcticcycle.org/ccta-2017

If you want to stay in touch/ get invites to upcoming events my mailing list is: https://tinyletter.com/JodyChristopherson