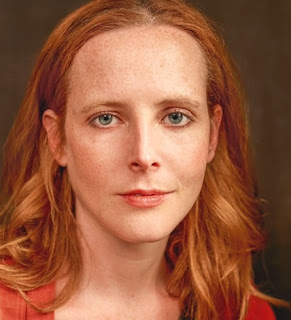 Hometown: Brooklyn, NY. Then briefly Washington, D.C. Then the upper west side. Then Brooklyn a little more. Then Manhattan again. Very New Yorky.

Current Town: Harlem, NY. My bodega is better than your bodega.

A:  I am working on a play called Gap Years which is about two sisters who have just had some big life events -- the younger one just made it through cancer treatment (she's okay, we think), and the older has just gotten fired from her celebrity babysitting job (which is to say, she babysits for the children of celebrities, she's not like, a famous babysitter, that's not a thing) -- and take a trip to the Rwandan genocide memorials. Cause that's how the younger sister wants to celebrate remission. No one said she was psychologically healthy.

The play is an exploration of dark tourism, which is this industry based on people traveling to sites of horrible moments in human history. It's also more generally examining the ways we conceptualize and commodify trauma, both in our own self-narratives and in our larger historical ones. Particularly about the body and illness/abuse/disease. And what we talk about when we talk about pain.

I think it's about those things anyway, I'm like barely halfway through it so who knows. But that's what I'm researching/immersing in.

I am also working on some audio fiction/drama projects, cause isn't it nifty to talk to people from inside ear buds, aka speak to them from inside their own heads aka take over/become their thoughts? So fun. I'm collaborating with the very brilliant composer/sound designer Daniel Kluger on a piece called Offense about a woman who comes home from a bad date, cooks some squid, and then plucks out her own eye. So, you know, look out for that one. It's really inspirational and peppy.

A:  Oh god. Well I was an overachiever as a kid who would like, make up my own extra-credit projects for classes I was already getting A's in (I got that out of my system and am now Extremely lazy) so as an homage to that long-dead extra-credit seeker self, I will give you not one but TWO childhood episodes, pick one:

First. When I was about eight I used to play Shakespeare with my friend Lydia. What "playing Shakespeare" meant is that we would go into the backyard and improvise histrionic scenes that involved queens and deaths and mistaken identities and a lot of "forsooths." We didn't really know Shakespeare plots but we just kinda riffed on our general understanding of the tropes; when we felt the other one had done a particularly good showing of Shakespeareness we would award her with an Academy Award. I remember Lydia got one for a particularly spirited death in which her dying words were railing against her husband, who had been a "stuffed cabbage."
Lydia eventually got bored of this game. I tried to give her more Academy Awards to keep her interested but it didn't work. She moved on. I never did.

Second. I was super into those children's books that involved wishing. Matilda, where she just concentrated enough and she could move objects. The Lion, The Witch, and the Wardrobe, where you just get yourself in the right mental state to walk into a closet and you can find Narnia. Freaky Friday, where you just have the strong enough thought at the right time, and you can switch bodies with another person. I tried All of these techniques. I would sit on my bed for hours and try to will myself into Matilda-ness. I walked into every closet in a new house and immersed myself in the clothes, hoping I'd take my face out of a coat and see a snowy fairyland with talking lions and formidable queens. I was/am deeply drawn to the notion of the powerful imagination: the will to believe, and the notion that by believing we can make something so.

And that's theater, right? An exercise in collective believing-into-being.

A:  I'd topple the tyranny of the New York Times. This answer feels largely New York focused, but the Times' totally undue influence bleeds outwards into what gets published and produced regionally and celebrated and emulated and perpetuated so it's a national disease. Take away their reviewing credentials and force the industry to figure out new heuristics and rubrics.
I just refuse to believe there is not a better way to curate/cull/create our national conversation about the theatrical form. Also of course lower ticket prices but I wonder if one might follow the other because catering to this status-badge system affects who audiences are and what price points are possible and it’s a whole interconnected mess.

Also my very very brilliant peers with whom I get to repeat-collaborate and who keep inspiring me: Morgan Gould, Leah Nanako Winkler, Emily Schwend; Molly Carden; Tommy Heleringer; Brian Watkins; Polly Lee; Nat Cassidy; Diana Stahl; Claire Siebers. I think a lot about how amazing it is that I get to be alive at the same time as and in the same room with those-these people. Like. The chances are cosmically slim and so the outcome is cosmically lucky.

A:  Theater that changes the air, that makes the space charged and electric and like anything could happen. Because it can, but most of the time we forget that.
Theater that teaches you how to watch it.

Theater that is kinetic and the strange -- events that feel visceral and body related and elemental are always exciting to me.

I think the essential crux of theater is watching something change in front of you. Whether that's just a thought, or a heart, or a relationship, or a world, it kind of doesn't matter, as long as it's really actually happening. It's really nice when it's actually happening.
In general I'm really inspired by both hyperattention to detail and cosmic themes; I like when the micro meets the macro and how they flip over and under each other.

A:  Well I'm barely a writer so wearing that hat while answering this question feels weird, so I am going to pull on some other hats too (actor/dramaturg/literary manager/reader):

Ruthlessly pursue your own taste.
Cultivate what moves/excites/intrigues/incites You -- fight your way towards that, and then once you find it, fight for it.
Taste is an expression of values, and as a playwright, you invent the value system of the world you are writing. It's awesome. But it's actually a lot of responsibility, inventing the world. God needed to rest after only six days of it.
So figure out what matters to you as an artist, and then make that. And know that if something winds up in your world, it's because you put it there and it's because you want that species of animal on your planet.
But please never worry about what other people like or say is "good."
Make what you believe in.

Also, work with actual actors in rooms. Plays don't exist on pages, and you can't practice being a playwright unless you're engaging with your work in three dimensions, with voices and bodies and space and time and audience.
Find ways to do that, any way you can.

A:  Well, I am not going to promote any of my own things here because they're either not announced yet or not not good enough for internet promotion, but I'll use this space to talk about some things that I Like. I have no personal stake in the following projects, except that they are my taste and I believe in them:
1. Go see The Waverly Gallery on Broadway. Elaine May is giving the most expertly layered, technically proficient and soulful performance I have ever seen. And Lila Neugebauer has directed a truly gorgeous production. Rush tickets are forty dollars; the seats are amazing and the experience is devastatingly beautiful.
2. Any literary managers/artistic directors who are reading this, produce Ryan Spahn's play Blessed and Highly Favored. It's so good. Get your hands on it and put it on its feet.
3. I've recently been listening to this podcast called "OK But Who Cares," by Anna Ladd, who has this whimsical, self-expositional, art-project vigor about her voice and her work and I just love it.
https://mytuner-radio.com/podcasts/ok-but-who-cares-podcast-anna-ladd-1262594451