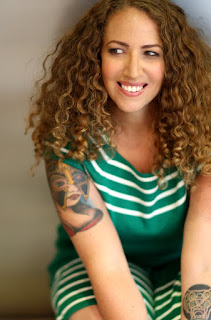 A:  Right now I'm working on a play commissioned by the Egyptian Youtheatre about the first women to fly combat missions called Night Witches. They flew planes for Russia during World War 2 and were named the Night Witches by the Germans. Their planes were made out of wood and canvas, mostly, they flew every fifteen minutes at night, to keep the Germans from sleeping, and they'd often cut their engines before dropping their bombs so they wouldn't be heard by their enemy. A lot of them were under twenty years old, and since I think there's a lack of exciting TYA material out there, especially with great roles for young women, I think it's a perfect fit for high school and youth theaters. My ultimate plan is to have a triptych of historical plays about women set during WW 2, the first of which I've already written, about a spy named Nancy Wake (Once A Spy). Night Witches has me stepping outside of my comfort zone a lot, it incorporates a lot of movement and lyrical choral elements, which is both exciting and really terrifying... Like all good things!

A:  After I wrote my first full-length play I realized that I had a lot of learning to do if I was going to do this as a profession. I thrive on crazy challenges and so I decided to write a play a day during the month of August (when my kids would both be in pre-school for the first time). I mentioned this to a playwright pal of mine, Tracy Held Potter, and she insisted that we make it a big thing and invite playwrights from around the world to join us. I thought she was totally crazy, I honestly didn't think anyone else would want to do it. And I was so, so wrong! 31 Plays in 31 Days has been going strong for SEVEN years now, and it still amazes me how many playwrights from all over the world still take on this huge challenge each year. It's now being run by the phenomenal Topher Cusumano who uses all his energize to excite hundreds and hundreds of playwrights to join him in this annual undertaking.

And, by the way, it worked for me. I haven't participated each year, but every time I do it stretches and pushes me as a writer and really strengthens my craft. I love it.

A:  This is kinda silly but I think it's mostly because I was alone a lot as a kid. I was a latch-key kid, and between school and when my mom got off I fended for myself. This typically took the form of my playing board games by myself, creating different characters who played against one another, playing tons of solitaire, since I'd assigned characteristics and back stories to all the face cards, so that each game involved a pretty epic fantasy to go along with how the cards fell, and tons of reading. My dad lived far away and sent strange books constantly. I read King Lear in sixth grade and loved it, but he also sent Grendel, In Watermelon Sugar, and lots and lots of Vonnegut.

A:  I like theater that makes me laugh and cry, that puts me in another person's shoes, that pushes and makes me question my own values. I like messy and complicated characters and stories that don't have easy (or any) answers. I think right now we're all being shoved so hard into separate and very specific boxes, I'm most excited about theater that takes people out of those box and reminds us that above everything else we're all human.

A:  Read and write a lot. See lots of theater, even bad theater, maybe especially bad theater... It helps you develop your own taste and you can start the fun experiment of how you'd fix it (after you've left the show, of course!). Read for a theater, I read for Berkeley Rep for a few years, I earned free tickets and had tons of brand new plays at my finger tips. Let your writing be bad, trust in your craft and in process, we draft for a reason. I'm not a write-every-day type, but I do think structure is key. To writing and writing habits. Oh, and read, read, read!! Get on New Play Exchange, it's the best investment EVER for anyone interested in new plays. And after you put up some of your work, read plays from other playwrights.

A:  I've been lucky enough this year to have at least one public performance in every month! Happening right now in November I have two plays in the Utah New Works Festival, Employee of the Month as a full production, and The Garden as a reading. My play Mom's Ham will also be produced in San Diego with Clairemont Act One Community Theater.

In December I have a workshop of Mom's Ham with Phoenix Theatre Ensemble and a developmental reading of my play Ripped with Athena Theatre, both in New York City.

And I have tons of work up on my New Play Exchange page here: https://newplayexchange.org/users/275/rachel-bublitz

Also, in case any of your readers teach high school or college and are looking for material, I have another TYA play that I'm looking for a second production of right now, a super fun and glittery full length called Cheerleaders VS. Aliens, which is up on my New Play Exchange page.