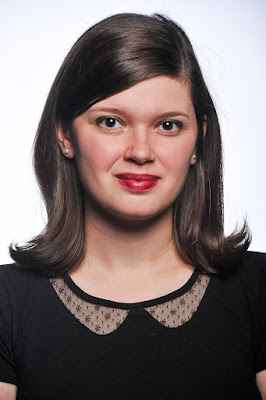 Hometown: Pittsburgh, PA for the first nine years, Durham, NC after that.

A:  I have a play in development called You Are What You, a comedy about a competitive eater who is trying to win an eating competition in order to afford her sister’s eating disorder rehab tuition. There’s a talking pot roast, farcical door-slamming, real food handed out to the audience, and five meaty (pun intended) roles for women. It’s being produced in Nashville this August, with the Garden Theatre Company.

A:  I was a very, very, shy child and had a lot of trouble socializing with other kids and would just sort of cling to the perimeter of the playground during recess. It got to the point where my exhausted teachers stopped attempting to get me to come out of my shell and just shrugged and said, “She’s an observer.”

At the same time, I’d unconsciously memorize sections of movies and recite them to myself when I was bored. So I’ve always been this weird mixture of obsessed with dialogue and talking, and much more comfortable with leaving it to other people to do. While I like to think I’ve metaphorically unclenched my fingers from the playground’s chain link fence as an adult, I’m now kind of proud of the “observer” thing because it’s what makes me a writer and what makes me sensitive to that feeling of being on the outside.

A:  Dream of dreams: All tickets would be free, and all artists would be paid fairly for their work.

I know that’s kind of two things. But they’re related because I think the class problem in theatre is pretty major, both in terms of the audiences attending and artists doing the creating.

I teach an arts criticism class to college freshman where I require them to go see a play and write about it, and for many of them it’s their first time in a theatre or seeing a play that’s not their high school’s annual musical. Many of them return saying they felt uncomfortable, that they didn’t wear the right thing, that they didn’t feel like the experience was intended for them. And that’s before we even get into whatever the play was about! Imagine how much those responses might change if theatre was something that had been easily accessed and free to them their whole lives. Imagine how much theatres might change if they provided that access. How might their season programming change?

In this theatrical utopia I’m describing, the plays produced would need to represent the economically diverse audience coming to the shows. This means paying artists enough to support themselves, so that more people can actually do this work. I know of a lot of theatres that work fairly hard towards at least one of these goals (lowering ticket prices or paying artists decently), but I wish more would work towards both.

A:  I’m pretty obsessed with Mary Chase who wrote Harvey, which I think is a perfect play, although it may not be super cutting edge of me to say. She really just wrote that play to be a fun evening of theater for people, but did it with such a fantastic love for the characters that it ends up being deeply human and profound years later, after the jokes have become dated and the hairstyles have changed. That’s always a good reminder for me when I catch myself trying to be deeply human and profound on purpose; it’s much better to shoot for writing funny characters that I love and hit the other stuff by accident.

A:  I have a deep love for my TV and my couch, so I think I’m actually a pretty tough sell when it comes to theatre! I really want to feel like “Yes, I had to get it together and put a bra on and come here and be in this room and experience this.”

So that said, I love plays that have a real beating heart to them, where I feel physically connected to what is happening on stage. I think that’s something that when theatre does it well, it does it really well. I also love a great story, sharply drawn characters, and opportunities for designers to do their thing. And I really love efficiency in story-telling because then I’m that much closer to getting to go eat a snack.

A:  Write the plays you want to see and submit them like crazy, before you think they’re ready. Join the Dramatists Guild and Playwrights Center for help with that.

Be nice to actors and stage managers. Learn about what they do. If you think you’d be good at directing and producing, do it yourself.

Cultivate meaningful friendships with other writers and theater-makers, but also with people who participate in the world in other ways. There’s nothing like having to explain some theatre-related anxiety to your social worker friend to really put things in perspective.

A:  My play Space Girl was just published, and you can read and buy it here:
https://www.playscripts.com/play/3211

The Garden Theatre Company in Nashville, TN is producing my play, You Are What You, in August 2019. More info here: https://www.gardentheatrecompany.org/20192020-season

Our writers generate to eliminate any mistakes that could still be present in your paper to present you with the best Cheap Custom Essay Papers providing the most value for your money. The Custom Research Paper Writing Services you receive come along with a plagiarism report for verification that our work is totally authentic and original.