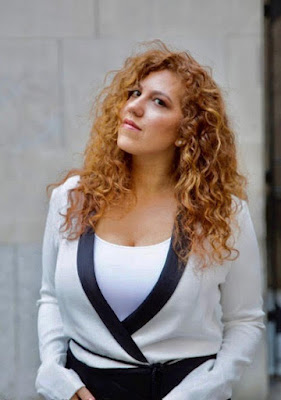 Current Town:  Back for the summer but living in Boston September-May. I’m currently at Boston University getting my MFA in Playwriting.

Q:  Tell me about your play in the EST Marathon, Oh My, Goodness.

A:  A woman calls a suicide hotline and gets the wrong number… it’s about interconnectivity and how one small act of kindness – or ‘goodness’ can change someone’s course.

A:  So many things! There’s a play about biracial identity which also deals with deportation (my father was deported back to Trinidad in 2008 under the Bush administration) - this is my most autobiographical play, there’s also a play about Girl Scouts with a chorus and rap music. I just finished the first draft of a play called Reborns that I developed with Kirsten Greenidge that I’m really excited about. Reborns centers around women who collect silicone baby dolls that look exactly like real babies – if you Google ‘reborns’ you’ll see! People’s first reaction is usually “that’s creepy” but that’s not my interpretation, I try to see the humanity in it. People are odd, they have all sorts of attachments and coping mechanisms. The play is asking how we attribute meaning to inanimate objects and in doing so does that change their inherent value. It also deals with issues of loss and how we tend to gravitate towards less complicated relationships.

I’m also working with director, Daniella Caggiano on the book for a musical called Brewsters about beer brewing women in 15th century England and how their image got tied to our modern-day understanding of the witch archetype. I developed early drafts of this piece through The First Stage Residency at The Drama League and The Emerging Artist Residency at Tofte Lake in 2018. I also just got a travel grant through BU to go to England next summer to do further research!

A:  I used to want to be “a naked doctor when I grow up”! I think I’m still that in a way. Exposing my own vulnerability through writing in order to foster wellness in a world that can sometimes feel lonely and alienating.

A:  I see a trend in theatre to write issue plays, plays that are extremely meta, or have a great deal of self-commentary. Don’t get me wrong, there are aspects of this kind of theatre that I think are important and that I find exciting but often it turns into the playwright talking “AT” the audience rather than letting an audience grapple with the issue on their own. I don’t think theatre should dictate or pontificate. If characters are well drawn and complex, they will have issues inherent to living in this world. We can still examine the same topics but through character and we can actually go deeper because there’s more access for empathy. I want the medium to be warmer and to have more humanity through a social lens.

A:  I’m a lover of language so Tennessee Williams and Shakespeare rank high. More contemporarily speaking, I love Susan Lori Parks, Martyna Majok, Paula Vogel, David Auburn, Celine Song, Annie Baker, Melinda Lopez, Leah Nanako Winkler, Peter Gil Sheridan… I could go on. I’m inspired by so many different sources because everyone brings something so unique to the table. Anyone that can make me hear language in a new way and make me feel the play from the inside out. I most recently saw Plano and was really taken with the way Will Arbery used language in connection to the passage of time.

A:  Good dialogue with odd characters that don’t behave the way you expect them to. I also get really excited when reintegration of themes and symbols seamlessly weave themselves through a play and pop up in a way that’s surprising; and always theatre that has an element of spectacle!

A:  This question made me laugh! I’m just starting out myself! My first production was less than three years ago and that was a self-produced 10 min play! That said I’ll share how I’ve been able to make fast strides. Start small, celebrate the baby steps, and put up work even when it’s not perfect – I believe that the play only gets better in the rehearsal room. That’s what I did. I wrote 10-minute plays, self-produced at small festivals and used that momentum to move forward. If you can get into play development labs that have a production component that’s always a win. Just start doing it, read a lot, support your friends work and they’ll support you. Get bodies in the room to hear it read out loud as much as possible. I also think it’s good to be realistic about what you’re applying to. Look at people just ahead of you in their careers and see what they are doing then look up those opportunities and apply to those if they are applicable to your work rather than throw yourself into a pool of applicants where you aren’t going to be seriously considered. Be realistic but aim high. Chart your career for the long haul rather than wanting or expecting things to happen fast. Live life outside of theatre and listen to people and stories unlike yourself.

A:  I just found out that my play Maiden Voyage has been chosen for a production for Fresh Ink Theatre’s 2019-2020 season in Boston. This is my first full length production! Maiden Voyage charts the first all-female crew aboard a US Submarine and explores gender politics and how the mimicry of maleness affects the women’s ability to carry out this patrol. It’s playing May 1st -May 16th at Boston Center for the Arts. I’ll probably also do a reading in New York January 2020 of a new play TBD. If you want to stay in the loop please visit my website at www.cayennedouglass.com or follow my IG at: bruteful_theatre

When people think about getting a instant loans for unemployed there is a common situation when they imagine crowds of people, a lot of paperwork and faxing but all this is not about easy payday loans online! This type of payday loans on disability benefits is really easy to get as you don’t have to go anywhere and do almost nothing.