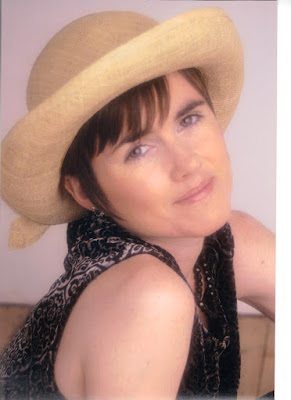 Hometown:  Chicago, nothing like it and a great place to save a few pennies after getting my undergraduate degree in Broadcast Journalism from the University of Illinois (roasting summers, bitter cold winters and fantastic parties), but NYC is where my professional life really began in television. London holds a special place in my heart for all the inspiring plays I saw living there while working in film and tv. Ironically, this experience led me to be a playwright. But I have never been able to do anything in a straight line, ask my better half about that issue.

Current Town:  Los Angeles, I love LA! It's not just the weather but the fantastic creative community that is here and of course, being able to walk to the beach. Dolphins, pelicans, stoners...what's not to like.

A:  That's a loaded question. I have a dramatic comedy, Last Swallows, going up about a multi-cultural dysfunctional family in New England that so far as resonated with everyone who as read the play. I have a fantastic cast and Kiff Scholl is an amazing director. This play goes up in September in the heart of West Hollywood. On the heels of that play, I have a mystical drama that takes place in Iceland during a storm in WW2 called, Defenders. This play was my writing sample to get into the graduate film program at USC which I survived with a diploma in hand at the end of it. For this play, I will be working for the second time with the wonderful Reena Dutt, who directed and won me awards at the Hollywood Fringe for my two hander Waitless which went on to the Edinburgh Fringe Festival and got some great reviews.

A:  As I have mentioned before nothing happens in a straight line in my life. I became fascinated as a toddler by Henry VII and his wives and started practicing Elizabethan English. Oddly enough, although I was terrified by him, I ended up marrying an Englishman, still not sure how that happened. Anyway, writing and school in general was particularly challenging because I am dyslexic. I often felt like I was crazy but was talked off the ledge with family support and a great therapist. It does take a village and I could not have gotten to where I am today without one.

A:  I would like Equity to get its act together in terms of what theater does off Broadway. If they could just understand the struggle small theater and producers have while trying to provide outlets for actors, I think we'd all be in a better space.

Q:  Who are or were your theatrical heroes?
A:  I got the opportunity to work with Ted Lange, who has done so much beyond his character Issac, in the Love Boat, especially for theater in the African American Community and Los Angeles theater. He writes what he wants, gets it on stage and is confident about every minute he spends doing it.

Q:  What kind of theater excites you?
A:  I view theater as an enclosed urban safari. You never know exactly what you are going to get at any given show. That includes the shows with my name on it which, at least up to this point, have not called for an ambulance to cart me away.

A:  It's not just about the show, it is about the process and that takes dedication. In any aspect of the arts where writing is involved it is really, really, really hard to get people to read your work let alone come together and read it live. If you can find a community and reward them in some even small way for helping you in development (pizza and beer) you will reap the rewards hopefully down the road. Only you can decide when a show is ready to try to find a backer. Or if you can back it yourself, do it and try to create a buzz for reviews to give your show a life beyond your creative nest that it is flying out of on to the stage.

This shows what impact does different negative and fake reviews of paper writing services and how it can affect the business.
Reviews or testimonials regarding any service are the only way to get an idea about its quality and credibility. My Assignment Help Review feedbacks from students all over the world. MyAssignmenthelp.com reviews show the dedication and efforts the company put to ensure 100% quality. Although most of the reviews are positive, but there are testimonials with negative feedback as well.
It is needless to say that if the students are convinced that edubirdie.com review is not a good, they will definitely not opt for it. Therefore, if the number of negative and fake reviews is increased on reputed sites like essay reviews, the sale can rapidly get down.
To counter this issue, the only way is to go through or read Argumentative Essay on Essay Writing Services that are posted on the site,
However, essayshark review and Ukessays review posted on the sites are very small.


Excellent Blog! I would like to thank for the efforts you have made in writing this post. I am hoping the same best work from you in the future as well.
I wanted to thank you for this websites! Thanks for sharing. Great websites!

namebiography.com
Thank you for this post. Keep it up..