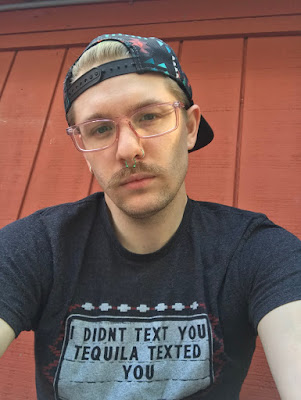 Hometown:  Huntsville, AL is where I was born, but I spent most of my childhood in Tanner, AL

Q:  Tell me about Tall Tales.

A:  I had just graduated from college and was on my way to my parents' house for my brother's wedding in September 2018, and I was struck with a question that seemed to come out of nowhere: what if I was actually moving back home right now? Growing up in relatively small towns, I always had the dream of moving away, and it seemed like I had accomplished that, but just a short string of bad luck could force me back home at any moment it seems. The thought of moving back home terrified me. Nashville is a progressive(-ish) city, one that I don't totally feel unsafe in as a queer person, but my hometown is... not that. I never thought I would write a "homophobia play," but the story just lept out of me. I began work on 'Tall Tales' on the day of my brother's wedding, and a first draft was finished in about two months.

'Tall Tales' is a horror play about being isolated and othered in the Christ-haunted Deep South, primarily for being gay. It's a play involving Christianity and ex-gays and folk witchcraft and lots of blood. It discusses the idea of queer bodies being seen as political before human, but it's also a play about healing from the deep scars that discrimination and religion can cause, the friends that keep us LGBTQ folk above water when it seems like the world is against us. Living as a queer person in the south is frightening a LOT of the time, but having the right people around makes life better.

A:  I'm the Literary Manager of Woven Theatre in Nashville, so I'm still overseeing our season. 'Tall Tales' is our final announced show, and in November, we'll be presenting a reading of 'Torera' by Monet Hurst-Mendoza (which I HIGHLY recommend! It's a wonderful play). Now that TT has opened, I'm moving on to work for my next play "Until the Waves Come," a play about the value of art after an apocalyptic event.

A:  I wish theater would take more chances on weird stuff and new plays. 'Slave Play' by Jeremy O'Harris being on Broadway gives me hope though. There's just a lot of really wonderful theatre out there that's unconventional that deserves to be seen, but I frequently see theater companies choose "safe" classic plays for their seasons instead of bold new plays.

A:  Sarah Ruhl made me want to be a playwright; after reading "A Clean House," I never looked back. Also, Tony Kushner's brand of fantasy (especially when utilized in plays that deal with gay trauma like in "Angels In America") constantly inspires me to push the fantasy in my work further.

Also, I am indebted to my dramaturg Todd Brian Backus! He really helped turn 'Tall Tales' into something special, and I'll be going to him again for his services.

A:  Oh, gosh, I love magical realism and fantasy-inspired theater. I love seeing a play that provides me with a brand new experience. I also get really excited about any plays that involve LGBTQ characters and storylines.

A:  YOU ARE GOING TO WRITE BAD STUFF SOMETIMES. I scared myself to death trying to hold myself to this standard of everything I write having to be revolutionary. When I heard my first bad play read out loud (in front of people!), it devastated me. It'll probably devastate you too. Let it. Own it! Then, continue forward. That's the nature of this work. There's a lot of failure involved, but experimenting and trying stuff out is honorable, even if it doesn't work out. Also, KEEP your "bad" stuff. There's always something good in there that you can cannibalize for another, better play.

This is my testimony about the work of a man who helped me.My name is Emily Williams from Australia. My life is back after 5 years of marriage because my husband left me and our children. I felt like my life was over and falling apart because i was devastated,Thanks to a spell caster called Dr.Edward Arabba who i met online.I was going through the internet,I came across series of testimonies about this particular spell caster, some people testified that he brought their Ex lover back and so on. The particular testimony I saw was about a woman called Susan Newton,she testified about how Dr. Arabba brought back her Ex lover in less than 3 days and at the end of her testimony she drop his contact and E-mail address.I contacted him via email and explained my problem to him. In just 2 days my husband came back to me. Dr. Arabba is really a talented and gifted man that God sent to solve people's problem,i will not stop publishing him he is a wonderful man.If you have a problem and you are looking for a real and genuine spell caster to solve your problem.Contact the great Dr. Arabba. Here is his contact: E-mail Address: dredwardarabbatemple@gmail.com
Website: www.edwardarabbaspells.online/
Mobile / Whatsapp Number:+27833153741