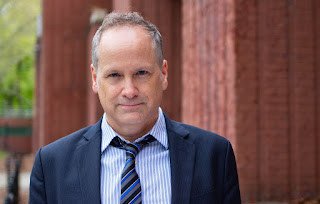 A:  A six-character play that I thought was going to be about a social justice issue — a twisty conversation about how historic plantation homes linked to slavery are used for private events — but is turning out to be about how money poisons relationships, and about compatibility. It’s gone from social justice play to personal play. The more I write, the more the characters take me to surprising places.

A:  In high school I wrote a single-spaced, serial story called “Newspaper!” in which all of my friends from school were characters in a soap operatic tale about a daily newspaper. (I was a journalism nerd in high school, and later got a journalism degree in college.) The story was part “Lou Grant,” part “General Hospital,” part “Dallas.” TV writing from the 1970s and 1980s had a big impact on me. Although written in prose form, it was dialogue-heavy and each page had three scenes. I didn’t know it, but I was essentially writing a kind of play. While working on it, I was always instinctively aware that I wanted to write toward “events” and cliffhangers that would keep people reading. Momentum was important. “Newspaper!” got passed around the school a lot, was confiscated by teachers because it was a distraction in classes, and, in the end, I had about 350 pages of well-fingered pages. I still have that typed manuscript in my office today, in a box aptly marked “juvenilia.” I find myself still writing toward “events” and big emotions in scenes, but with — I hope — a little more sophistication.

A:  I would call for a change in arts education, K-12, obligating all children to take theater-making classes just as we obligate them to take physical education. If jocks get to make fun of me in volleyball, I get to make fun of jocks singing show tunes or navigating Shakespeare. (Just kidding — sort of.) Arts education and practice: that’s how we build better people, a better society, and a community that supports the arts.

Q:  Your breakout play “Alabama Story” is set in the Deep South. Is that territory that you return to in your work?

A:  “Alabama Story” is so-far my only play in the South; I fell in love with a true story about a Montgomery librarian who was persecuted by politicians, and have been lucky to have had 27 productions of it since 2015. The content dictated the setting. Although I live in Queens, NY, my roots are in metropolitan Detroit and in many ways I still identify as a Midwesterner, and my subsequent four plays feature Midwestern people and locales (including Wisconsinite snowbirds who now live in Florida — the South! — in my play “Two Henrys,” available at New Play Exchange https://newplayexchange.org/plays/22186/two-henrys). The new play that I am banging away at is set in the Hudson Valley, but my eye is always on the so-called “flyover” states. The Midwest is too often unrepresented, dismissed, maligned in pop culture. There’s lots to unearth.

A:  Theater that takes me to a place I’ve never been, or shows me new aspects of people and places I know — or thought I knew —intimately. Theater that reminds you that you’re in a theater, but that might mean elevated language or complexity of character or literally breaking the fourth wall. I guess like everybody else, I don’t want to be bored.

A:  Try to write daily, read all the plays and musicals that you can, see as much theater (and opera and dance) as humanly possible. Read Jeffrey Sweet’s “The Dramatist’s Toolkit,” Anne Lamott’s “Bird by Bird” and Natalie Goldberg’s “Writing Down the Bones.”

A:  The main character in “Alabama Story” is an Indiana native, and the play finally gets its Indiana premiere Oct. 25-Nov. 17 by an awesome Equity company called Actors Theatre of Indiana in Carmel, IN. Jane Unger directs a cast that includes theater co-founders Cindy Collins and Don Farrell. http://atistage.org/alabama-story/

I advocate for my plays and the work of other theater makers (particularly dramatists) on my website ByKennethJones.com. https://www.bykennethjones.com

Visit our blog too, bro ... which provides interesting news information ...