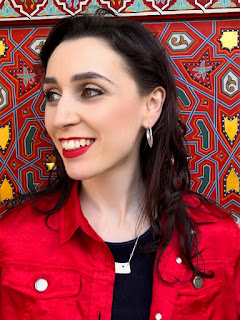 Current Town: Astoria, Queens! (I moved all of eight minutes away from my home-neighborhood, but the bar and restaurant options are so much better! And I absolutely can’t afford to live on Roosevelt Island these days…)

Q:  Tell me about His Majesty, Herself.

A:  I have been obsessed with the female Pharaoh Hatshepsut since I was little, but I only realized how important she was to me as a historical figure recently. She was famous for her seemingly deceptive depiction of herself as male during her reign as Pharaoh rather than accepting the position of female regent. There isn’t actually any evidence that she was queer, but the ancient Egyptians had no great fuss about homosexual behavior, and there aren’t records of Hatshepsut’s sex life so I’m going to believe what I want about that haha. There are so few queer Arab icons let alone queer female Arab icons who were also rulers of kingdoms that I feel like… just let us have this?? She was the first female pharaoh to come to the throne by merit over potential male heirs, and fought her entire reign to keep her power. When white guys working for the Met discovered her temple in 1927, it was mostly destroyed and her body was missing from the tomb. These men decided that the violence of the destruction and the implied disrespect to her physical body must mean that she had deserved this horrible fate. She was called the first evil stepmother for keeping her more deserving male stepson/nephew from his rightful throne throne. However, when her body was rediscovered in 2008 (with many more women in the field of archeology and Egyptology), they took a better look at Hatshepsut’s legacy and the merits of her reign. I’m fascinated by how culture and gender alter the perspective on someone’s legacy. This is also the first play I’ve written this blatantly about being a queer Arab woman and the challenge has been intimidating and exciting. But I am looking forward to having a play that I can point to and say “that’s me!” and feel like I’ve accurately depicted myself at this moment in time.

A:  This play has been so intimidating to tackle that I haven’t really been able to balance this and any other projects at the moment. I recently wrote a one-act I’d like to revisit at the next opportunity. The End of Incorporated Filth, is a real-time cabaret about the very last burlesque show in New York as Mayor LaGuardia began harshly enforcing the Hays censorship laws through queer communities.

A:  Oh this is fun! Uhm okay. I have two (I can’t pick)- 1. When I was really little, I had this box of little plastic figurines, and I would put together these wildly intricate and hard to follow storylines for my parents to play with me. I totally knew what was going on, but my parents were always playing catch up (they didn’t get the script I guess). But my dad likes to remind me of a time where he picked up a Simba toy and I stopped him, insisting that that wasn’t Simba it was The Wicked Witch of the West pretending to be Bugs Bunny wearing a Simba costume. And there were always **notes** when the storyline wasn’t being properly followed hahaha 2. When I was a preteen I was deeply obsessed with Victorian literature- specifically Charles Dickens and Victor Hugo. So, when I was 13 and my family went on vacation to Paris, I reread Les Miserablés and made a list of specific locations from the book and what happens in each scene, then I took my parents and 9 year old brother on a walking tour of Les Misérables through Paris. Needless to say, I had an incredible time hahaha

A:  Arbitrariness and funding. In relation to each other and individually. Who gets funding for what project what gets the most success- it all seems so arbitrary. This trend of blockbuster-movie-turned-Broadway-musical is going on much too long, and I know so many deserving playwrights who could use those insane budgets for shows with authentic representations of marginalized voices. The arbitrariness of getting a production or a residency with no distinguishable pattern.

A:  Wow there are so many people, and so many different lists. My first theatrical heroes were cartoons like Bugs Bunny, Madeline, and Disney’s Robin Hood. Then it was Shakespeare, Albee, Pinter, and Beckett, but as I continued to study and research playwrighting I added contemporary writers- Lynne Nottage, Suzan-Lori Parks, Sarah Kane, Paula Vogel, Lucas Hnath, Christina Anderson, Sam Hunter, Peter Sinn Nachtrieb, Simon Stephens, Will Arbery, Olivia DuFault, Jennifer Haley, Mona Mansour (wow I could literally list playwrights forever… and I know I’m still missing idols here). And there are more flamboyant figures who have influenced every part of my life as well as my theatrical tastes like John Waters & Divine, Liza Minelli, Joe Strummer, Noel Fielding, Billie Joe Armstrong, Bettie Page, David Bowie, Debbie Harry, and Freddie Mercury. (My friends make fun of me for having an endless list of “loves of my life” as you can see here, it’s very real and very long) Oh! And the people I admire endlessly for making things happen and giving artists a platform like Emily Morse and Joel Ruark at New Dramatists, Michael Bulger and Maria Striar at Clubbed Thumb, Emily Simoness at Ryder Farm. People who do the hard work of supporting and creating spaces for artists to develop work. They form spaces of excitement, community, and passion and that is incredible.

A:  Right now I’m really interested in fully immersive storytelling. Theater that engages all five senses and keeps the audience moving. I’m obsessed with incorporating food and scent especially. I haven’t been able to enact this idea to the fullest extent yet, but I’m excited by the concept! Also, I’m fascinated by augmented reality storytelling!

A:  I am definitely still in the phase of “starting out” but what has been helping me move forward in my career so far has been applying to everything, and volunteering for and supporting as many projects as you can be a part of, while not sacrificing your ability to complete and enjoy your own endeavors.

A:  I don’t know if this is a plug necessarily, but I made myself a website recently! https://www.chloehayat.com/

But- I do a lot of self-producing!! I started After-School Special Theatre https://www.afterschoolspecialtheatre.com/ with friends from college, a company of scrappy young female-identifying writer-producers that value accessible, organic, and experimental theatre. I am also a part of Breaking and Entering Theatre Collective, https://www.bethtrco.org/ dedicated to the Pre-Emerging theater artist.

We’re always up to something.

And this year I’m so excited and grateful to be co-producing the Hit and Run Reading Series with Matt Freeman and Theater Accident! Our first reading is **tomorrow!! 1/13/2020** of my play His Majesty, Herself!