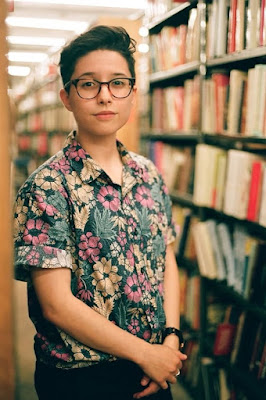 A:  I'm currently in rehearsals for a Zoom reading of EMILY DRIVER'S GREAT RACE THROUGH TIME AND SPACE, my co-written play with Gregg Mozgala for all audiences, which was featured on the 2020 Kilroys List and was originally commissioned by La Jolla Playhouse. This reading will be produced by Queens Theatre and The Museum, Arts & Culture Access Consortium (MAC) in honor of the 30th Anniversary of the Americans With Disabilities Act.

And I've also plunged into drafting BLANCHE & STELLA, which is a (very loose) modernized adaptation of Tennessee Williams' A STREETCAR NAMED DESIRE with a dash of THE GLASS MENAGERIE as well. The show features an all-female+ cast, no Stanley, and a Gentleman Caller who isn't a gentleman. Needless to say, I'm pretty excited about this one.

A:  As a young queer kid growing up with Cerebral Palsy, I was beyond lucky to have been taken under the wing of my great-aunt Helen, who was a Polio survivor and a 1st grade teacher in the Brooklyn Public School system for over 40 years. Aunt Helen literally taught me how to read and write—we wrote my first story ever together when I was 4 years old—and also instilled in me her passion for the theatre, taking me to matinees that I was definitely far too young to see and very afraid of (the end of Beauty and the Beast is pretty intense for a two year-old), but also totally captivated by. She didn't have any kids or a family of her own, so I became her de-facto "grandchild," and her motto, "You can do anything you want to do, be anything you want to be, if you try" is something that sticks with me until this day.

Aunt Helen unfortunately passed away when I was 14, and my first play, which I wrote shortly thereafter, was my attempt at coming to terms with her illness and death, as my family and I took her in for the last nine months of her life. I've been writing plays ever since, and have come to view my career as a playwright as one of the last (and most important) gifts she's ever given me.

A:  Accessibility. We need more and different stories about all kinds of people, not just the cis-, white, able-bodied mainstream, and we also need to make the actual act of watching / attending theatre more accessible to communities who may not be able to physically get to the theatre, whether for economic, geographic, or disability status-related reasons.

A:  I was inspired to write my first play about my Aunt's passing after reading THE GLASS MENAGERIE as a freshman in high school, so Tennesee Williams is a big one for me. My professors at Columbia University School of the Arts, where I'm entering the third-year of my MFA, are huge heroes of mine as well (Lynn Nottage, David Henry Hwang, and Chuck Mee). And then, of course, there's Paula Vogel.

A:  Just keep writing, and write stories that honestly and truthfully interrogate the deep questions you have and hold onto. And get uncomfortable. Because if you're uncomfortable, it means you're writing something that matters to you. And if it matters to you, it's probably going to matter to a lot of other people as well.

A:  You can register for the Zoom reading of EMILY DRIVER'S GREAT RACE THROUGH TIME AND SPACE, which will be presented at 2 pm EST on Wednesday, 7/29, here: https://queenstheatre.org/event/emily-drivers-great-race-through-time-and-space/. If you can't make the reading, a recording of the performance will be available on the Queens Theatre website until August 1st at www.queenstheatre.org.

And for more about me and my work, you can check out my website (www.aabrenner.com) and my New Play Exchange page (https://newplayexchange.org/users/17071/aa-brenner).

All the discussion made in this blog have inspired a lot because this info not given by another platform.
Nursing essay help UK