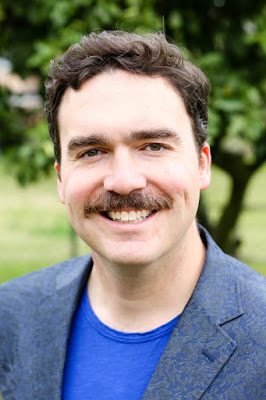 
Hometown: Orlando! – You have to sing it, like in The Book of Mormon.

Q:  Tell me about Night Launch.

A:  It’s inspired by my family. It struck me deeply at a holiday dinner a few years ago how diametrically opposed some of my family members’ memories were, the different ways that people choose to re-write their shared histories.

In the play, Brenda is exploring memories and traumas that her mother either remembers differently, or flat out denies. It’s set in Cocoa Beach, Florida and jumps around in time, backdropped by rocket and shuttle launches from the early days of the Space Program.

It’s a different type of play for me. A memory play, and I think memory plays are shifty and deserve a little magic. While the characters go to some difficult places, I hope that people also walk away with a sense of awe and wonder.

A:  I’m writing a comic screenplay about a Catholic priest and a hedonistic ghost. It sounds like a “… walks into a bar” joke, and maybe that’s all it’ll end up being. It’s a throwback to 80’s ghost comedies like Heart and Souls. I’m having a ton of fun and it’s serving as a kind of palate cleanser.

The other thing I’m working on right now is best described as a tragi-comedy and it’s more in keeping with whatever my “normal” style is. It’s coming in fits and starts, but that’s normal for me to work on more than one project at a time. This one takes place in a mega-mansion on Lake Superior during the collapse of society. We track the journey through the perspective of a woman with a rare and real inner ear disorder that gives her supercharged hearing.

A:  I must have been about six years old and we were living in McIntosh, Florida, which was a tiny little orange grove town without a stop light. I was allowed to walk the few blocks from our house to the public park whenever I wanted.

It was shortly after Christmas and I had gotten this amazing all-white sweatsuit that I appropriately treasured. I put the sweatsuit on and head down to the park and the big slide, alone. I climb to the top and just a few inches down, right in the center of the slide, right where my little all-white sweatsuit butt was supposed to go, was a big fresh dollop of bird poop.

But I’m a problem-solver.

I throw my legs over the edges, figuring I’ll scoot down with plenty of room to spare between my body and the slide. My pants will stay pristine and fun will be accomplished.

And, of course, I fall from almost the very top, breaking my arm. I’m stranded, a solo six year-old in a park, as the bone keeps fighting to break through the skin.

And I look back on that story and don’t think it’s horrifying – I find it ridiculous. To go to that kind of extreme to protect an all-white sweatsuit is pretty hilarious, and that probably best explains who I am as a writer.

A:  Read something written by Ike Holter, Gina Femia or Calamity West. These are contemporary writers who deserve to be on people’s reading lists, and their work inspires me.

A:  I love a play that is satisfactorily complete, but also feels like the characters and the stories live on beyond the fall of the curtain. Since I mentioned Ike Holter’s writing before, I’d say that Sender is a great example of this ideal. I directed a production for Mirrorbox Theatre, where I’m the AD.

A:  Don’t edit until you have a complete first draft. It took me forever when I was getting started to actually complete anything. I had a very strong inner critic that wanted to tinker and refine before there was ever any tangible object to be examined.

A:  I mentioned that I’m the AD for Mirrorbox Theatre – and I’m so proud of what we do. We’re in our third season as the only company in Iowa exclusively doing state premieres of contemporary works. On March 20, we started a series of free Friday night readings, Out the Box, and you can track our events and register at mirrorboxtheatre.com/out-the-box

This is my testimony about the good work of Dr Jumba who help me....  am sorry for putting this on net but i will have to, by this world best spell caster that brought back my husband who left me out for past 3 years, i eventually met this man on a blog site posting by one of is client for help, i explained everything to him and he told me about a spell caster that he had heard about and he gave me an email address to write to the spell caster to tell him my problems. In just 2 days, my husband was back to me. I just want to say thank you to this truthful and sincere spell caster, sir all you told me have come to pass and thank you Dr Jumba  . Please I want to tell everyone who is looking for a solution to their problems, I advise you to kindly consult Dr Jumba  , he is real,he is powerful and whatever the spell caster tells is what will happen, because all what the spell caster told me came to pass. You can kindly contact him on whatsapp : +1 (908) 517 4108 or email him : wiccalovespelltools@gmail.com  .  website :  https://drjumbaspellhome.wordpress.com/

I also like plays that are satisfactorily complete. Believe me, I think our lives are incomplete enough, entertainment should always be far away from reality. I choose my movies or plays based on reviews online, and I prefer things that have a happy ending. In fact, I choose everything after seeing reviews online, be it for my academic guidance or personal guidance. Like, recently I searched for best assignment writer reviews online and then selected my option. I think that it is better to select something by taking the opinions of others!