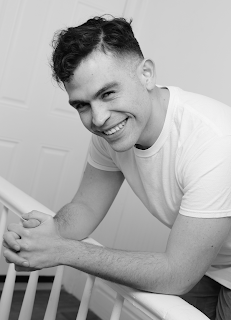 Q:  Tell me about Haus of Dust.

A:  Haus of Dust is a new campaign to bring awareness about substance use in latinx queer communities.  The project was born from a play I started writing back in 2018 about my inability to overcome meth abuse; after therapy, coming out about it to my family and friends, a couple trips aiming to overcome it… and feeling nothing helped, I decided to succumb to writing.  When I finally overdosed and ended up in a hospital bed, I completed the play. This all happened with the support of Alice Eve Cohen who mentored me throughout the process.

So, Haus of dust is a campaign and a play… and more!

I have been focusing on community engagement work in the past two years.  I arrived to community organizing because I didn’t feel storytelling and theater were being enough for me… I love art and stories, and I believe in representation, but honestly it is not enough… representation is only the beginning, an ignition to create space for the people who deserve justice and visibility.  In my journey as a young community organizer, I vowed to never produce one of my plays again as a solemn play.  From now on, I will be utilizing my artistic practice in intersection with the communities, the themes, subjects and topics of my work touches upon.  Haus of Dust being so personal, also raised a concern to myself about wether I wanted to feel I was commodifying from my own story.

As covid-19 progressed, with the support of a development residency at Loisaida INC, we decided to conceptualize a campaign around the story.  Now, we are building a prototype for a phone game that if successful (In the years to come) could help patients going through programs and/or people dealing with substance abuse, a tool for realizing anxiety and cravings on the spot. We are also fundraising and developing an on-site garden with OSS project and Loisaida INC, to create a truly open space for people looking to connect and create community surrounding the issues that oppress them.  I think what has truly helped me heal is the support, love and availability of my family and friends, way beyond any program I have been part of.
So…

Haus of Dust the show, is an immersive film installation (Created as such due to covid-19 complication and the involvement of ten actors).  The audience is invited to join us at The Abysm, a bar in the abyss, the place between the living and the dead.  In here, through screens, ten souls will tell us their stories about substance abuse or their connection to such, hoping to transcend and move into the beyond. The show doesn’t only touch on my story, but it offers a whimsical interpretation in pressing matters such as: native South American female bodies being exploited for labor, human trafficking, the importation of Coca, (our South American sacred leave into the United States as powder), my own stories of love, heartbreak, immigration, sexual abuse and resilience as a Colombian Cis Gay Male. While the show is clearly dense in content, we are presenting it in a way that is stimulating, whimsical and somewhat meditative? Somehow, without looking for it, my work always tends to have a meditation in between. In the making of the show, we also involved the community by making shrines and altars, hosting singing classes, and moralizing Loisaida with neon markets!

Haus of Dust is a feast for the senses.  It is a very honest and real project, aiming to shed light on what we cast as shadows, and aiming that doing so will open pathways of true and heart warming connections in our community. To heal, we need to heal together.

I want to take a moment here to list all of the amazing artists involved in this project:

Shrines made by Julia Justo

A:  Ah! While Haus of Dust is happening, I will be engaging in a residency at The Lighthouse in Governors Island with The Beam Center, as part of a newly formed collective named Mycellial Collective, this was created with incredible artists I met at EMERGENYC 20’. We will be creating a showcase of works in progress by the collective.   The piece I will be developing is actually the first play I wrote, Dreamless, which is based in the real story of Sergio Urrego, a queer Colombian Teenager who took his life as an act of reclamation from the systems that oppressed him and bullied him. In the show, he wakes up in limbo, a theater where an audience stares eternally.  And in here, due to his actions, he is punished to re-live the same day over and over again, until his angel seed sprouts, he takes over the system, and transcends to the unknown. (You can clearly see a pattern in my work here…) I am quite obsessed with rituals and transcendence, and the afterlife.

A:  This appears on Haus of Dust, spoiler alert!

When I was six years old, I had a recurrent dream.  I dreamed about an angel falling from a meteorite, and from its light, the angel would descend upon me.  When the angel is close to me, his skin turns inside out, and he tries to devour me. After my dream, I would wake up, walk from my room in the second floor, to a studio overlooking the garden on the first floor. In this studio, I would sit in the floor, waiting for
Lucky, the golden labrador in my house, and Rebecca, the wingless parrot my uncle picked up from the streets to come over, and there I would spend the rest of the night, looking into the animals, my friends, and into the stars, wondering if I would ever find a way to express how I felt, and if so, how.

And I think I did,
and possibly it doesn’t make sense,
but I’m here, still observing, still sensitive,
still living, still standing quietly.

A:  I don’t think I’d change theater at large, as I believe theater is life, ignition, the beginning of community, the beginning of myth, storytelling, performance. I would change the rigidity of American theater.  I would dare us all to think beyond logic, to understand through sensations and feelings, and not expect to be always given the secrets of the making.  I would change the constraints of our work, and how institutional it is, and with this, all systems of discriminatory hierarchies that truly don’t serve us.  I would truly dare us to utilize our power to be a magnifying glass for those who need it, and not for our desire to put on a show.   I would connect and communicate.  I would reinvent what public in theater is.

A:  This is very hard for me but here goes my answer:


Irwin Piscator, for his innovation and resilience.
Enrique Buenaventura, for his Colombian traditions and horizontal making,
Santiago Garcia, for Teatro La Candelaria and interdisciplinary theater,
Eugenio Barba, for making of story something anew,
all the tribes in South America that precede colonization for using performance to care for the land,
All the theater artists I’ve met who are honest, able to honor their work.
And my 16 aunts for the pompous representations they make of themselves.

A:  I feel like I answered this somehow, but the bold! the crazy! The illegitimate, the unseen, the theater that represents us properly, that dares for a brighter future, the theater that is spiritual and for the soul, and that vibrates as energy of communion.

A:  If you feel like writing,
write,
in
any,
format,

If you feel like flying,
fly, wingless or not,
fly between the symbols,
and their meanings,

make of story,
your most,
desired, perfect,
imperfect,
way of expression.

Put down what makes no sense,
what craves to be explained,
what intrigues your curiosity,
what calls you out to be seen,

After all, it is only language that remains,
and the memory of it being spoken.


And the memory changes,
but what you remember,
is what matters the most.

You’ll get there,
and so will I,

we will find our voice,
every day, and every hour,

We will find our voice,

if we,
decide,
to
not
shut.