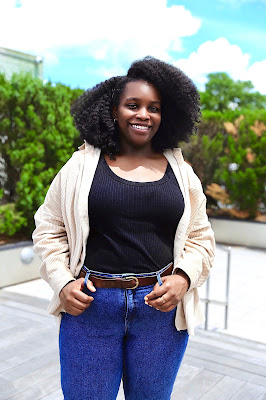 A:  So I’m currently about to start the production process for my first short film, entitled Bleach, in my hometown this summer. I was commissioned by Cadence Theatre to be a part of a project called Sitelines BLM. This project was created last year, largely in response to the Black Lives Matter Movement’s outrage over more continuous acts of racial injustice. All of the pieces will be filmed in various historic sites around Richmond, VA. My script in particular makes mention of the controversy in our city surrounding the removal of the Confederate monuments (which landed RVA on the cover of National Geographic by the way) and explores true internal feelings of racial injustice through honest conversation and spoken word poetry. Though there is much work to be done, I have tons of love for my city. So getting the chance to create something for this project is very much a dream come true.

I’m also currently a fellow in Juilliard’s Lila Acheson Wallace American Playwright’s Program, which always keeps me busy with starting new plays! Right now, I’m working on a new play centered around the stigma on mental health in the Black community. It’s been a difficult, yet exciting topic to shed light on and explore.

I think I used all of these things as outlets because growing up, I was painfully shy, so I didn’t talk much outside of my friend group, and I always followed the rules. So, with things like drawing, taking photos, or writing – I could do all of this on my own terms, and nobody could tell me I was doing it “wrong” or that I “couldn’t do it that way.” I never had my “rebellious” stage as a kid because artistry was always my way of being rebellious.

All of this to say, that’s exactly what kind of writer I am – rebellious. I like to focus on difficult or even controversial topics simply because that’s what interests me, and I’m never afraid of what the outcome will be because I’m only being true to myself as a writer. If I didn’t, I’d honestly be miserable and there’s no way I could keep pursing this as a career or anything else!

And I actually ended up being an artist after all, which is kind of insane to me. The hilarious part of it all is that I still have a genuine interest in all of the “artsy” things I thought I was going to do back then, and I do all of them as hobbies to this day.

A:  I’d definitely say accessibility is a big issue. I was nearly an adult when I got into theatre and was an adult when I saw my first Broadway show, but I remember one of my favorite poets, Carvens Lissaint, telling a story about a younger version of himself. He didn’t have a place to live, was couch hopping with friends and family all over NYC, and competed in poetry slams, open mics, and spit poetry on the trains for donations. Instead of getting food, he would save to buy tickets to see In The Heights at Richard Rodgers. That story really stuck with me, because I realized how much hardship I would’ve also faced as a young person trying to fund a passion for the arts.

And I can’t not mention that eight years later, Carvens played a lead role in Broadway’s Hamilton on that very same stage, so never stop dreaming friends!

A:  I’m a big fan of Lynn Nottage! I can’t say that I would’ve pursued theatre as hard as I have thus far if I’d never read Ruined. That was one of the first non-Shakespeare plays that I ever read, and was the piece that made me say, “I want to write stories that make people feel the way I felt reading this.”

A:  Definitely experimental theatre. I love theatre that is surprising and unpredictable. Mainstream theatre is cool, but you can show me to the smaller, hidden gem theatres producing exciting new work any day.

A:  I would say stay driven by your passion because the journey probably won’t be linear. I started out just genuinely wanting to learn about and be immersed in theatre, so I interned at my local theatre. I was honestly never looking to be in a position where anybody knew my name. That’s not to say don’t have big dreams/goals. You absolutely should! But for me personally, the rejections were somewhat easier to take and didn’t completely throw me off track because at the end of the day, I knew I’d find a way to do this whether anyone knew me or not. Just remember why you started and why you continue to pursue it!

Also, refrain from writing off opportunities as too small or not worth it, because you never know who you might meet or who might be watching!