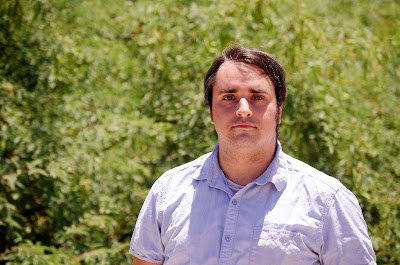 A:  I’m working on a few projects (including prepping for the world premiere of my play Light Switch), but one work-in-progress I’m particularly excited about is an adaptation of Autism awareness advocate Michael John Carley’s article The Brat in Your Classroom. The article depicts his tumultuous years at a private school called Moses Brown, and how he emotionally processes those years in the wake of receiving an Autism diagnosis in his mid-thirties. It’s still in early stages, but I’m really excited for people to (eventually) see it!

A:  In my backyard, I would stand between two trees and pretend I was on a stage. Or I would make myself a minimalist set with a few chairs on the backyard patio (my “second stage,” if you will). Armed with two sticks (which I would bang together to make percussive sounds), I would sing made-up lyrics to musical theatre melodies I knew. I would act out musicals with plots that fused derivatizations of other musicals with my own contributions—a musical that was vaguely about a gay rights activist with a score lifted directly from Evita, an Into the Woods-style musical featuring an assortment of Bible characters (and a Devil Giant who embarked on a murderous spree in Act Two), a Wicked-like story about a gay teenager whose jealous emotions literally overtake him, to name a few. I would never get through a whole show, but rather repeat my favorite musical moments and/or songs. There was no audience because there didn’t need to be one. I was my own audience. Just when I was getting lost in the music and the stories, my sister would scream from her bedroom window “DAVID STOP SINGING.” And I would stop. Then I would tap the two sticks together, quietly, gently, and ease myself back into the musical world I had created for myself.

A:  Just one thing??? Aside from the usual wishes that it was cheaper and more accessible, I would change the perception of neurodivergent artists. There seems to be some astonishment and bewilderment that neurodivergent artists can tell their own stories from their own perspectives. Why is this? Why can’t there be an assumption of competence? Why does autism specifically (since that is my neurodivergence) have to be portrayed solely as “Inspirational”? Why can’t it be treated with complexity and nuance? Why does it always have to be the neurotypical playwrights who tell neurodivergent stories? Why is Curious Incident of the Dog in the Night-Time, a play that doesn’t even mention the word “autism,” the most famous example of neurodivergent theatre? I would change all that.

A:  Amy Herzog, for her ability to take messy situations and add beauty and clarity to them.

David Lindsay-Abaire, for his sharp observations about humanity, even in the most absurd of his plays.

Mickey Rowe, for fearlessly working and living as an autistic artist.

Paula Vogel, whose generosity in mentoring young artists is legion.

Larry Kramer, whose activism inspires me to be more politically aware and active in my work and life.

A:  If you’re a fan of an artist and you find yourself in the same space as them, thank them for their work.

If an artistic director or literary manager or fellow artist you’ve reached out to never replies, that says more about them than it does about you.

Find your people. Whether they be playwrights, designers, actors, administrators, what have you, find the people who get your work and want to see it succeed.

That being said, no one will be a better advocate for your work than you. So if you wrote a play, and you believe in what it’s saying, don’t be afraid to put it out there.

This quote comes to mind: “Those who mind don’t matter, and those who matter don’t mind.”


A:  My play Light Switch will be receiving its world premiere from Spectrum Theatre Ensemble in Providence, Rhode Island this coming April. Watch this site for more info: https://www.stensemble.org/

The Gift of BS will receive a virtual reading during the Clay & Water Playwrights Retreat the weekend of February 24—27. Watch this site for more info: http://www.clamourtheatre.org/events/2022-2/clay-and-water-2022/

The Dummy Class will receive a workshop reading with Purple Crayon’s PLAYground Festival of Fresh Works the weekend of April 30—May 1.