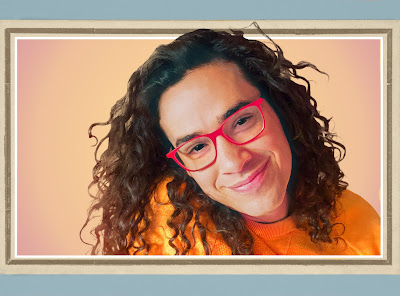 A:  This morning I cleaned the freezer. It was the most difficult project I’ve taken on in quite some time. A haunting expedition into the land of questionable past choices. Impossible to chart the dramaturgy of the thing. Harrowing.

Pre-freezer, I’ve been spending the bulk of the Spring hacking away at three pieces: I’ve been working on OUR TEMPEST with The Farm Theater’s College Collaboration Project. It’s a piece about Climate Change, queerness, and the perils of devised theatre. I’ve also been developing THE RESERVOIR with the EST/Sloan project, a super personal piece about Alzheimer’s disease, addiction, and what, if anything, we can do to prevent or recover memory loss. I just completed and shared the first draft of SPIN, a play I wrote with the Arthouse INKubator group. It’s a kaleidoscopic piece about reincarnated owls, birthday party clowns, the scarcity mentality, and Jewish mysticism.

I’m currently chewing on a nascent idea for a play that is about Bernie Sanders and apricot farming.

A:  At four years old, I staged a 90 minute “Oklahoma!” on my rocking horse. I wore a cowboy hat and Barney underwear, nothing else. My grandma played Aunt Eller, but I played the rest of the characters. You should have seen my one person dream ballet; I went so hard I broke a lamp. My parents filmed the whole thing and at several points you can hear them trying to rush me along, especially during a painfully under-tempo “Poor Jud is Dead.” I stubbornly persevered.

My auntie says I was born a 40-year-old gay man. My AOL Instant Messenger username was NathanLaneRules. Embarrassing beyond belief, but explains a lot.

A:  I love theatre that scrambles you, that doesn’t allow itself to be classified, that has you laughing and crying and shaking your head in disbelief. I want to be surprised. I want real risk. I want plays to be journeys into the unknown rather than thesis statements. I want playwrights to build exquisitely weird structures that miraculously work. I want questions rather than answers. I want pain, humor, and heart all at once.

A:  Write. Don’t be precious. Write a bunch of bad plays. Write your way into your voice; don’t try to think your way into it– it won’t work. Focus on language, not ideas. Follow the flow. Surprise yourself. Make yourself laugh. Let the play sneak up on you.

A:  Have you tried Angie’s Boom Chicka Pop Kettle Corn??? I am in no way affiliated, but it’s so unbelievably good so here’s a huge plug for the snack to rule all snacks. It’s in a purple bag and at most grocery stores. Best advice I can give.

I share work often in NYC, especially with Youngblood at the Ensemble Studio Theatre and The Farm Theater. For the next couple years, I’ll have a chance to share work at Juilliard as well!