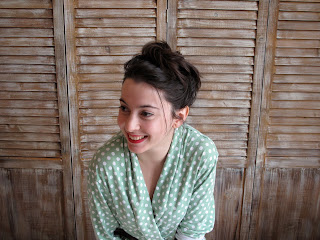 A;  Working on revisions to my play, THE FISH BOWL that will be part of Juilliard’s Playwright’s Festival in September and directing Blair Singer’s NOTICE ME that starts performances at the Wild Project on 7/19.

Q:  Tell me about NOTICE ME – how did you get involved in this project?

A:  Blair is a client of my former boss at CAA and we became friends when I worked there. Earlier this year we were having lunch in LA I asked him what was going on with NOTICE ME – I play I’d always loved. He told me he wanted to do it in New York with “kids.” I immediately called my friend Daniel Grossman who runs FOGLIGHT, a production company that produces theatre, music videos and independent films, that was four months ago - we open next week.

Q:  Do you identify more as a writer or a director?

A:  I identify as a writer but I love directing and will continue to do so for as long as I have the opportunity - they fill different creative needs for me.

A:  Both of my parents are writers so I fear I may bore you with all of the stories I could tell here but I will say that when we were very young- my brother, sister and I would entertain ourselves with character based improv games we made up with titles like “Dark Bar”, “Carpet Salesman” and “Child Molester”. The latter in which my sister Amelia, in a Tony worthy turn, would wear our grandmothers large, yellow “molester glasses” and beg my brother and I not to “take her shades” when we put her in prison.

Also, most members of my family were very sharp and creative teasers, as the sensitive youngest I developed a thick skin from an early age – I think this shows in my plays – which are ultimately sympathetic beneath a prickly exterior.

Q:  Is that how you would describe your writing – prickly and sympathetic?

A:  Sort of - I am currently at Juilliard and in my mid-year review my professor Chris Durang told me that what he sees in all of my plays is a combination of psychology and humor – which was exciting to hear, as that is how I would describe them as well.

Q:  Who are your theatrical heroes?

A:  Maria Irene Fornes. FEFU AND HER FRIENDS is my favorite play and I directed a production of MUD for my thesis in college.

A:  I like theatre that is emotional without being sentimental. Christopher Hampton’s adaptation of THE SEAGULL directed by Ian Rickson on Broadway and Jez Butterworth’s JERUSALEM, also directed by Ian Rickson at the Royal Court come to mind. Also, there was a reading of Bash Doran’s KIN at the Pacific Playwrights Festival that totally blew me away - I can’t wait to see the full production at Playwrights this season.

Q:  You had a play at the Pacific Playwrights Festival as well, correct?

A:  Yes. My play BETWEEN US CHICKENS was one of the other readings.

A:  Apply to everything and don’t second guess yourself based on other people’s opinions, you know better than anyone else the strengths and weaknesses in your own writing.

We offer the farouk chi flat iron. We provide the best price and free shipping for all the
chi flat iron. As we know, the
ghd iv styler is the first class and famous brand. So it is the good chance for you. Don't let it pass. If you are looking for the
babyliss flat iron, you have come to the right place for
instyler rotating hot iron.