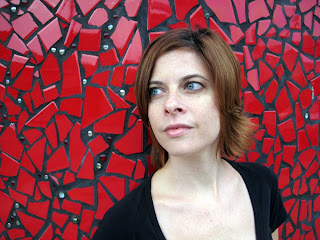 Q:  Tell me about Breadcrumbs coming up at CATF.

A:  Breadcrumbs opened this past weekend at the Contemporary American Theatre Festival, which is a gem of an event that came to my attention only a couple of years ago. The Festival, under the leadership of Artistic Director, Ed Herendeen, produces five new plays every summer in a beautiful, civil-war era town in West Virginia, just outside of Washington DC. Over twenty years, Ed has developed an amazingly loyal audience, who often come over a weekend to see all the plays (and once again - all new plays); by the time I showed up for opening, Breadcrumbs in its 199 seat theatre was almost sold out for all of its 16 performances!

Laura Kepley, a super talented colleague of mine from graduate school, brought my play to Ed’s attention and directed it for the Festival. The play is about a reclusive writer of modern fairy tales who is diagnosed with Alzheimer’s and must rely on this somewhat untrustworthy younger woman to tell her final story - an autobiography. Laura and I were lucky to score a couple of amazing actresses, Helen Jean Arthur and Eva Kaminsky, both based in New York City, to play the roles. I spent the first week of rehearsal with them, doing some final re-writes, then came back three weeks later for the production, which I loved.

It was also a rare celebrity-fest for us playwrights, who are made to stand and show our faces at all events, including right before our own shows. I normally prefer to lurk anonymously in the audience, listening to unfiltered feedback and melting away if the show falls flat, but realized the value when one theatre-goer after another approached me to talk about the show, talk about their family members suffering from dementia, and share how touched they were by the play. As I found myself saying over and over again what an important part of the play they are, I realized how fervently I believe it.

Q:  Tell me please about Neighborhood 3!

A:  I unwittingly hit a nerve with this play, which gave my career a long-prayed-for bump. (Heh heh, when I found out it was going to be produced by the 2008 Humana Festival, I was most tangibly thrilled by the fact that I would not have to go through the expensive and time-consuming process of marketing it on my own . . . printing it out, writing targeted cover letters, shlepping armfuls of heavy envelopes to the post office, etc.) It began as ten minute play about a boy addicted to a disturbing video game, and a mother’s schizophrenic attempt to pry him away. This was stuck to the end of a series of meditations between suburban parents and adults, written in the doldrums of my first year out of graduate school. Over two years, through development opportunities, readings, a bout of my own World of Warcraft addiction, and the help of many generous artists, I managed to turn this Frankensteinian collection into a single story, and was ultimately thrilled with Kip Fagan’s direction of the Humana premiere on Michael Raiford’s terrifying, shiny black set!

The play is still being produced by local theatre companies around the country, and, most gratifyingly, by high schools. This past Spring there was a student-produced production at the East Brunswick School of the Arts in New Jersey; one of the teenagers involved sent me production photos on Facebook, a couple of which are now featured on my web site, www.jenniferhaley.com. What I have found most exciting about this play is the conversation it has sparked between generations.

I am currently working with a young film production company in Los Angeles on ideas for turning it into a screenplay. It’s been fascinating to twist the story around, to explore it as a single-protagonist piece as well as an ensemble piece, to cast it in different genres . . . horror, psychological drama, thriller, etc. I like this company because their main interest in the script has to do with the disconnect between parents and children, which is the heart of the piece. Neighborhood is one of a handful of possibilities for their next film to produce - but I’m keeping my fingers crossed.

A:  I am heading to New Haven for a week to work with Page 73 on a new play called Froggy. I wrote the first draft a couple summers ago, and am glad someone wanted to do some development on it, as that’s often the kick in the ass I need to continue a project.

Froggy came about because I wanted to write a play in the style of a graphic novel . . . I had no idea what that even meant before I sat down to write it . . . but what came out is the noirish tale of a woman determined to track down her vanished ex-lover when she sees him as a character in a video game. She plays the game and goes in search of him while also exploring through memory the roots of addiction and obsession that bound her to him in the first place.

I wrote the play in InDesign using “panels” of action that denote memory or scenes from the video game. The main character is played by three different actresses - one who tells the story in voiceover, one who plays the woman, Froggy, as an adult, and one who plays her as a twelve-year old girl. I have often been asked by those who have read the piece how I actually see it staged, and although I can say it would involve projections, microphones, killer lighting design, and music, I myself do not know how how some of what I’ve written would actually work. That is what we’re going to be playing with in New Haven. Thanks to Liz Jones and Asher Richelli at p73, I’ll be working with a wonderful director named Matt Morrow, a lighting designer, and several actors to start figuring this out.

A:  Hmm, one story jumps to mind . . . I was sitting on my front porch, a little girl about five years old, playing with a big, plastic race car. An army caterpillar came rippling along, and out of sheer curiosity about whether its blood was yellow or iridescent green (it was usually one of the two), I ran him over with the car. Just then, my mother came out the front door and recoiled. She asked me, “How could you do that?” And I suddenly felt a flood of shame and confusion for taking that small creature’s life so casually. I think writing has become a way to satiate my curiosity about the way life works without committing acts of violence . . .

A;  Well I could make lists of things like wanting more inspired theatre spaces and for the regional theaters to produce more new plays; however, I’m a pretty firm believer that creating great things in spite of adversity and trusting that the rare, perfect alignment of resources will arrive with work and faith and patience are key to inspired art and an inspired life.

A:  My current theatrical hero is playwright Luis Alfaro, whose play, Oedipus El Rey, I recently saw at the Theatre @ Boston Court in Pasadena. He’s my hero because he gave me the kind of theater that excites me, which is:

A:  The kind that causes some kind of paradigm shift within me. In this case, it was taking a Greek play that’s always felt a little musty to me - a textbook piece - and reworking it so that I got its heart. Luis was aided by an inspired production and wonderful actors who brought to life the passion between Oedipus and his mother (I’m often a little repulsed by love scenes on stage - they feel strained - but these were something else), and sparked my deeper understanding of a young man’s hubris.

(Luis is also approachable, kind, and a teacher of young playwrights . . . I always admire the person within the artist.)

A:  Write only what interests you, try new things with every play you write, produce your own work in the beginning (get your favorite peeps involved), and prepare for years of investigation . . .

A:  I've got to plug my writers group, The Playwrights Union (www.playwrightsunion.com).  These folks are amazing writers and generous people - they are a huge reason I find it fulfilling to be a playwright in Los Angeles.

Alas, no shows on the immediate horizon, but someone do a second production of Breadcrumbs, okay? Don’t let it fade away just because it’s had its world premiere, okay??
Posted by Adam Szymkowicz at 7/13/2010 09:45:00 AM

We offer the farouk chi flat iron. We provide the best price and free shipping for all the
chi flat iron. As we know, the
ghd iv styler is the first class and famous brand. So it is the good chance for you. Don't let it pass. If you are looking for the
babyliss flat iron, you have come to the right place for
instyler rotating hot iron.