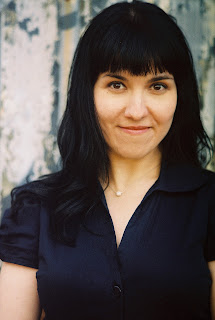 Q:  Tell me about Spring Tides.

A:  I started Spring Tides in my last year of the MFA playwriting program at Ohio University. It started as a satire about a guy named Joe who wakes up one morning to find himself in Hell with a greaser named Frankie and a nun named Bernardina. They then team up to kill God. Obviously, this has nothing whatsoever to do with the current play. Happily I had opportunities for lots of development, including (besides Boomerang) a production in Philly with Cardboard Box Collaborative (I believe they procured a literal ton of sand for the show), and a developmental reading in Alaska with the Last Frontier Theatre Conference. It all helped me find what I really wanted to say. Time helps, too. I think I’ve grown up a lot since my mid-twenties. And happily my plays have come with me.

A:  I'm working on a new full-length play that's a loose riff on the Orpheus/Euridice myth, when I’m not slammed with the reading/writing required for my schoolwork. I’m in my first year of the PhD program in Educational Theatre for Colleges and Communities at NYU. Arts education is another deep passion of mine—I work in the management of teaching artists and school partners at Lincoln Center Institute (with many wonderful colleagues). And I'm also working on planning a wedding and moving to a new apartment with my amazing fiancé. Life is full! But it’s all happy stuff.

Q:  Tell me about Analogous.

A:  Analogous is an organization founded by Marie Evelyn focused on interaction art, which is a term for artworks in various genres that resonate with the concepts of complexity theory. This ranges from the exhibition of visual artworks created with recycled materials to improvised experimental music to rule-based performance. My focus with the company is performance work involving language, as Co-director of Dialogue-as-Performance. One major project we worked on was Metis, which had a couple of different incarnations. The goal was to bring together playwrights and improvisational musicians and explore how a playwright might “improvise” with written words to share sonic/visual space with the musicians. We performed it at The Tank back in 2007 with six playwrights and six musicians. Our second version (last year) focused on the language, using an algorithm Marie and I came up with (she’s a master of algorithms) to determine the direction of the dialogue. It’s fun sometimes to work on things that are quite different from my other playwriting work.

A:  Well, this is a disturbing story that I may regret sharing, but when I was a little girl I had a stuffed bunny that served as my imaginary friend. Going to school I’d imagine he was roller-skating alongside the school bus. Also he had wings and could fly. Also he had magic-dust in his tail. One day, to mess with me, my dad told me about how people kill rabbits by holding them upside-down and breaking their necks (I warned you). I obviously found that highly upsetting. That night, I think because I was tempted by the horribleness of it, and I was hitting the age where I was starting to realize, “It’s just a toy. You can’t really hurt it,” I held my bunny upside-down and “broke his neck”. And then cried and cried. But then I consoled myself with the idea that he was a magic bunny, after all. So I took the magic-dust from his tail and resurrected him. Creepy as it is, I think maybe that story came to mind because it’s sort of like my writing—it has magic, and it’s dark, but also hopeful. I won’t say that this explains me as a person, though—I have a pet bunny at present, in fact, and I assure you that he is very well cared-for. No breaking real bunnies. That was a totally terrible story to share.

A:  Ummm… more funding would be nice. But besides that, wouldn’t it be great if there was cross-pollination between independent theatre companies across the country? A way for the amazing work being done in NYC to make its way over to Chicago, say, and vice-versa. So that companies could communicate with and inspire each other directly. Places like Portland, too, where they’re doing interesting stuff. And other cities we might not think about. Tulsa—I bet somebody’s doing something totally awesome in Tulsa. I’m a Midwesterner, so I like the idea of sharing more with the region between the coasts.

A:  There are so many exciting and wonderful writers out there. But heroes? Jacquelyn Reingold writes plays that are beautiful, touching, and incredibly funny. She's the writer I hope to be someday. Other heroes, shoot—well, Shakespeare, man. Beckett. Ionesco. Pinter. Churchill. Those guys are for serious.

A:  I really like playwrights who use a magical quality, who ask big questions, and also make me laugh. Like Fornes, Rivera, Lucas, Ruhl, Durang too, and others. So many others! I recently read Griselda Gambaro’s Information for Foreigners, and that play shook me up. I also have to say that I am very excited by compelling theatrical design. I am so blown away by the work of scenic and lighting and costume designers—their insights and vision can be stunning. I was reminded of this upon seeing the work of Boomerang’s team for my show—I’m so very humbled by the talent I’ve been lucky enough to work with.

A:  Write, write, write, and see, see, see. It’s so important to see stuff (theater and dance and music, too), though the expense can be a challenge. It’s very easy to get stuck only seeing the work of your friends, but it’s really valuable to see what else is out there, both small-scale and large. Plus you’ll start to get the opportunity to meet more people, which I’ve found to be critical. Probably 90% of the work I’ve done has been with somebody I’ve met already, or through some personal connection. I think it can be tough being noticed when the group knows nothing about you already. There are a lot of playwrights out there.

A:  Spring Tides opens Friday, March 9th and runs through the 25th at The Secret Theatre. Tickets are available through www.boomerangtheatre.org.  I also have a short play opening the same weekend as Spring Tides, as part of a short play festival by Full Circle Theater Company called “Unlikely Allies”. It runs for four consecutive Sundays starting March 11th at 4 p.m. in the basement of Triple Crown bar in Chelsea. I’ll also plug the work of my fiancé Dan Pratt, because I think keeping aware of work in other disciplines is really valuable. He’s a jazz saxophonist and has several albums out, most recently with his Dan Pratt Organ Quartet. He is phenomenally talented, as are the players in the band, and I’m not just saying that because I’m marrying the guy.
Posted by Adam Szymkowicz at 3/06/2012 10:32:00 AM