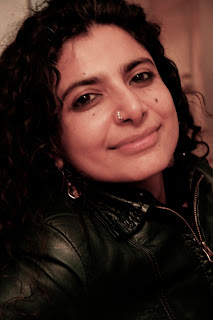 Current Town: Complicated question for a Gypsy -recently relocated from Albuquerque to Brooklyn.

Q:  Tell me about Parts of Parts & Stitches.

A:  It’s a play set in 1947 during the partition of Pakistan and India, towards the end of British colonial rule in the region. Members of my family were among 1 million murdered and 40 million displaced. Many of the situations and even characters are stories that my aunts, uncles, and papa shared with me. It’s about lovers, friends, neighbors, communities, and nations that are sacrificed for land, water, and political power; it’s about the physical and psychic shock of loss and displacement; and it’s about the courage that makes me wonder “could I possibly make a decision like that – to sacrifice my safety, my body -for someone else’s?”

A:  When Parts closes, I’ll be in rehearsal for a solo piece Scene/Unseen, directed by Antonio Miniño, being featured in the Planet Connections Festival at Bleecker St. Theatre in June. With the Emerging Writers Group at The Public, I’m 10 pages deep into a revenge fantasy play about a widow of a suicided Indian farmer who comes to work as a maid in the home of the CEO of a multinational bio-tech corporation; in June, I go to the Playwrights Center in Minneapolis to further develop The Rug Dealer, which takes place in a Persian carpet shop in Boston; and I’m looking for an ensemble and funding to keep evolving my flamenco play La Fea: A FlamenChoreoMyth.

A:  I think it was our first Xmas in the U.S., I was six, and my parents wanted me to experience an American Xmas. They didn’t have much money so my mom bought a big dollar bag of accessories for my generic barbie and individually wrapped each tiny accessory – the high heels, coffee mug, necklace, etc.- so I’d have lots of presents to openJ Can you imagine how she came up with that idea, then spent the time wrapping these items that were a fraction of the size of her pinky (after working a twelve hour day?) How this story explains me as a person and artist: I believe in being resourceful - it’s a kind of alchemy - making magic out of the mundane.

A:  Gritty, raw, emotionally and morally complex but not sentimental; fantastical; historical; structurally playful and innovative; movement and music driven.

A;  My solo show, Scene/Unseen at the Bleecker St. Theatre, Planet Connections Festival in June; everything MTWorks puts up; the world premiere of Draw the Circle by Mashuq Deen at InterAct Theatre in Philly April 4-8; Arooj Aftab and Arif Lohar at Asia Society April 28; http://www.facebook.com/midniteschild
Posted by Adam Szymkowicz at 3/07/2012 11:38:00 AM