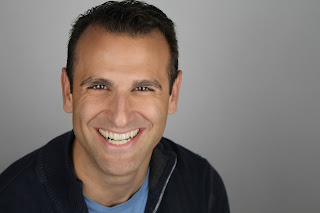 Hometown: Northridge, CA - home of the '94 Northridge earthquake. My high school had to cancel our production of Into the Woods because our auditorium was so damaged and there were budget issues (so sadly my Cinderella's Prince/Wolf was never seen) - so we did Working instead because we could do it on a smaller budget).

Current Town: Bogota, NJ - about 15 minutes over the GWB from New York City.

Q:  Tell me about The Community.

A:  Chris Marshall has just been cast as George in Mt. Laurel Community Players’ production of Who’s Afraid of Virginia Woolf? He invites Zach, the young, Black actor who’s been cast as Nick, over for a drink to give him some actorly advice – and possibly to kill him. Whatever works. When the production’s Martha and Honey show up uninvited, they find themselves caught in a play about a play (within a play?) tackling deadly issues like race and, perhaps even more dauntingly, community theatre. The play asks questions about how we view stories about race and the not-just-color blindness that many have when trying to talk about it.

A:  I'm currently in my first year of the MFA program at Point Park University and writing screenplays for the first time (which is really cool to stretch different writing muscles) along with working on some other new plays. Revising my play una casa/a home. In the very very early stages of developing a couple other new pieces that don't even quite know what they are yet.

A:  When I was 7 years old I wanted to take acting lessons so I asked my mom and she said she'd be happy to drive me anywhere and pay for it but that I'd have to do the initial legwork myself. I remember looking up Dramatic Classes in the Yellow Pages (it was right before Draperies) and calling all of the places listed and asking to send me a brochure. I've always known that I wanted to do theatre and I love that my mom empowered me to make those dreams a reality and taught me, from a very early age, that I'd always have support, but that if I really wanted this, it was going to take work on my part. Nobody forced us to do theatre (in fact, the opposite is usually true). So if we want it, we've got to remember the legwork involved is all part of the process (though I still constantly need to remind myself of that.)

A:  How dismissed it is by the world at large. I wish theatre could once again be considered a crucial part of society and culture - though I do take some solace in the fact that Entertainment Weekly features it more than it used to. That's a true barometer of cultural importance, amount of page real estate in Entertainment Weekly, right?

A:  (in absolutely no particular order): Chuck Mee. John Guare. Christopher Durang. Stephen Sondheim. Stephen Schwartz. Flaherty & Ahrens. William Finn. John Patrick Shanley. Tony Kushner. Tina Landau. Robert Lepage and Ex Machina. Ibsen. Michael Frayn. Margaret Edson. Ken Davenport. Signature Theatre. Playwrights Horizons. Jeremy Cohen and the Playwrights Center. All of the people at the Dramatists Guild and my fellow Regional Reps for the Guild (I'm the NJ Regional Rep) who work tirelessly on behalf of writers everywhere. Anyone that runs a young playwright's contest or festival. The writers who take the time to support and cheerlead for other writers - people like you, Adam, Donna Hoke, Patrick Gabridge, Dusty Wilson, Ken Jones, Jeff Talbott, Lia Romeo, Gwydion Suilebhan...my own students who inspire me every day to keep creating and dreaming...I'm sure there are others that I'm forgetting and that'll hit me at 2am tonight, but those are the first that come to mind.

A:  My two most amazing experiences in the theatre ever were Tina Landau and Expanded Arts' production of Chuck Mee's Orestes which I saw when I was in high school doing a summer program at NYU, and Robert Lepage and Ex Machina's production of The Seven Streams of the River Ota - both of which pushed me to fully lose myself in the immense worlds they were creating. I love theatre that fully engrosses me and makes me giddy and like a kid in a candy store.

A:  I just read (well, I actually listened to the audiobook) of Elizabeth Gilbert's Big Magic which I HIGHLY recommend. The entire book is so inspirational but her epilogue sums up all her thoughts and I think is the perfect advice for anyone involved in any kind of creative pursuit at any stage of their career:

"Creativity is sacred, and it is not sacred.

What we make matters enormously, and it doesn’t matter at all.

We toil alone, and we are accompanied by spirits.

We are terrified, and we are brave.

Art is a crushing chore and a wonderful privilege.

Only when we are at our most playful can divinity finally get serious with us.

Make space for all these paradoxes to be equally true inside your soul, and I promise – you can make anything.

So please calm down now and get back to work, okay?

The treasures that are hidden inside you are hoping you will say yes."

I mean, come on. Isn't that the best advice ever?

A:  There's another reading of The Community that Playwrights Theatre of New Jersey will be doing in February in their reading series (along with some other kick-ass playwrights that I'm excited to be in the company of). A 10-minute play of mine, "For Unto Us," is being done at Exit 7 Players in Ludlow, MA in February as well, and two 1-minute plays of mine are being done by Stage Left Players in Spokane, WA the end of January. And another 10-minute play, "Tim Eless, Private Eye," is having a production in June at Bergen County Players - a community theatre that I've been involved with as an actor. Beyond that, my play A Real Boy has three productions slated for late 2016/early 2017 (in NYC, LA and Austin) which I'm very excited about and I'm also looking forward to working with The Brooklyn Generator where I'll be writing a new play in 30 days - scary, but very cool! Please visit my website, www.bystephenkaplan.com for other updates and news.