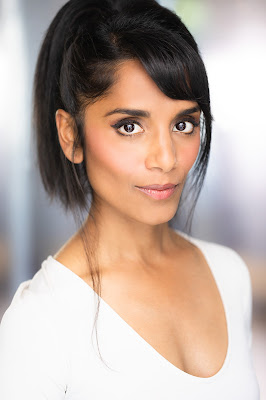 A:  Rehearsing Treya's Last Dance for a run at the Hudson Guild starting 18th September - woot! Filming a new YouTube Character Sketch Series. Refining my second play Wisdom Teeth for production in 2020. Learning some history and stuff about my new home-town.

Writer: Spoiler-alert! It's not a mushy and romantic story.

From the earliest age, I read like reading was going out of fashion. It was a way to go into different worlds - I could totally lose myself. I loved all my writing assignments and would disappear into the stories my pen would scritch out. Collateral damage? I started lying like a mo******er! Because, simply put, at some point I temporarily lost the ability to tell the difference between reality and fantasy! It was fixed - through a lot of stern (furious) talking-to's from my parents. I know what's real now, thanks. Weirdly, my acting side helped to temper the slightly introverted writer inside me. Now the two sides balance each other out and I feel like I can get the both of both worlds - the extravagance and the intellectualism.

A:  Oh man - I'd move the money away from the huge, well-known shows and towards the lesser known stuff and promote new, quality writing from non-West End / Broadway writers. There is beautiful work at the mid to lower levels of theatre in London, New York and LA, but it doesn't get seen because the money goes towards pushing the huge shows. I'd tackle that.


A:  I don't think I have any heroes as such - it's such a huge ensemble effort to put a play on that everyone involved becomes a hero! A couple of plays that made a big impression on me were George Bernard Shaw's Pygmalion, and Jennifer Haley's The Nether.

A:  Work that is beautifully written, beautifully acted and beautifully produced, addressing themes that are applicable to our lives now. This could be Shakespeare re-directed to appeal to a school audience, or new work specifically written for the same purpose. I just love the feeling that live performance gives the audience - of all of us being party to a magical, unrepeatable moment. And I love that a night spent at the theatre is always an event, a special moment to be shared with special people.

A:  I don't think I have any particularly amazing advice! I guess what I find to be useful for me is to force myself to write, even on days when it feels like terrible gears are grinding together. The more words you get out, the more shit you clear so you can get to the good stuff. Read a lot. Watch plays so you know what sort of stuff you want to be writing, and look and listen to people - you'll be recreating them on stage. Best to know what they really sound like :)

Treya's Last Dance is on for 6 Wednesdays at the Hudson Guild Theatre in Los Angeles. Tickets are available here: https://www.onstage411.com/newsite/show/play_info.asp?show_id=5029 but are selling fast!