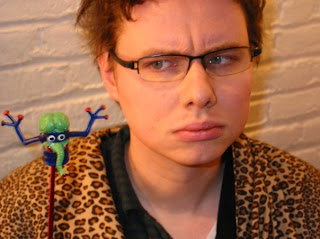 Q: Tell me a little about your play Viral that's going up soon. Who is the artistic team. Have you all worked together before?

A: Viral is about three people - a sister, a brother, and the sister's boyfriend - who share both a shitty apartment and a strange fetish: they are sexually and emotionally obsessed with watching footage of people dying. They're very specific about it; they like quiet, nonviolent - ideally consensual - video of passage from life to death. They put out a vague website looking for someone suicidal who might be willing to kill themselves on camera for them, and one day, a mysterious woman named Meredith responds. The play follows the four days she lives with them up to the morning when they shoot the video, and explores how hard it is for strangers in close quarters not to start caring about each other. It's a play with a gruesome hook, but it's also a little sweet in a way. Viral is produced by Gideon Productions, the theater company I co-founded nearly a decade ago with Jordana Williams and Sean Williams. Gideon has either produced or co-produced most of my plays. Jordana, with whom I have worked as a director five times in the past, is at the helm. Three of the actors - Matthew Trumbull, Kent Meister, and Jonathan Pereira - are new to me (and razor-sharp, I might add). Becky Comtois, li'l sis of your former interviewee James, is playing a role I wrote specifically for her (as me and my fiance are kind of Becky-groupies). Amy Lynn Stewart is an actor Jordana and I knew in college, but have not seen in the years since until she showed up to audition. By remarkable coincidence, she last appeared in a play of mine fourteen years ago - also playing a character named Meredith. (I don't use that name in every play.)

Q: Besides as a playwright I know you as the star and titular character in James Comtois' Nervous Boy. What was that experience like?

A: The Adventures of Nervous-Boy was without question the coolest acting experience of my life. The script is this beautiful tone-poem to self-hatred and self-destruction, the Nosedive production team gave it an amazing look and soundscape, I got to work with wonderful actors, and I got to be on stage the whole time and play a dynamite arc while everyone else in the cast brought the set to me. To this day, every once in a while I miss playing Nervous-Boy. I actually haven't been able to act in a while, which is a bummer, but it's hard to complain when the writing's going nicely.

Q: How long have you been doing theater in New York? How did you start? What led you to become a playwright and start your own theater company?

A: I've been in New York about eleven years now. Like many people, I spent most of that first year in my apartment watching TV, but then a lot of the people I did plays with in college started moving here, and we sort of huddled together for theatrical warmth, doing shows various places downtown. Many of those people have left New York or theater or both, but they helped a scaredy-cat like me ease into it. My personal Great Leap Forward was when I got involved at Manhattantheatresource. There's a great core group there, and nearly everyone passes through there at some point, so I started meeting and working with a number of different groups through that hub. (Manhattantheatresource made Universal Robots happen, which was pretty key for me.) I've been a playwright since I was very young. I liked writing stories and I liked acting in children's theater plays, and the two sort of merged. Even as a little kid, I felt like I wasn't seeing the plays I dreamed of seeing, and figured no one would write them but me. Nowadays I see like two good plays a week, but there's still certain things I dream of that I know will only exist if I write them. So I do. I formed a theater company partly at Sean's more-or-less nonstop urging, but partly also because that's what I knew. I went to the University of North Carolina at Chapel Hill, which is no conservatory by any means. But they did give us undergrads this black box in the basement and let us mostly do what we wanted there. It was completely DIY, and I grew to like it that way. DIY's way harder in NYC - it costs a lot more, for one thing, and you have to have a job too - but it comes more naturally to me than sending out scripts and waiting to see what happened.

Q: You were one of the first theater bloggers. When did you start? How has theater blogging changed since its inception?

A: At the beginning, it seemed like the whole world of theater blogging was Laura Axelrod, Isaac Butler, Dan Trujillo, and George Hunka - and all in New York. (That's probably not how it actually was, but how it seemed.) Laura moved on to other interests, George went sporadic, I went even more sporadic, and Dan stopped altogether (blogging, not writing), but Isaac has gone on to be one of the most prominent voices in what's now the theatrosphere, which stretches all over the world and which has diversified fascinatingly. Guys like Travis Bedard and DevilVet focus on process, Colin Mitchell and Alison Croggan review, you interview, Nick Keenan sometimes writes about relevant creative technologies, Scott Walters is pursuing an ongoing mission, Playgoer's more journalistic, and Leonard Jacobs looks to be running a one-stop shop. The hard part is that theater blogging is the weirdest and most contradictory genre of blogging there is. It's a publicly and internationally available exchange of ideas over events that can only be experienced locally. Isaac can host a debate on Watchmen on his blog, but not on the awesome and actually kind of important Dan Trujillo play he just directed, 'cause only local people can even see and experience the Trujillo play. We can't know what Travis or Alison or Don Hall would have thought. They could all read the script, maybe, but not share the event. It's hard to write in a mass media platform about a local, site-specific event. People are still figuring out how to share what they do. I hardly write anymore. I have a demanding day-job and errands to run every night, and then if I have any writing energy left, I horde it for playwriting. This makes me a little sad. I wish I blogged more. I liked it. I hated the fights, though, the flame-wars. I never have the stamina to stand up to some of the people who really enjoy them.

A: I really like stories I can sink my teeth into. I'm pretty basic: I want to meet a character, get to know them, and worry about them when they get into trouble. I like stories that don't rely on making the characters stupid, or poor communicators. It's an important truth that smart, articulate people - even artists! - get into all sorts of personal and political messes, and we need to look into that. I like plays that take characters for who they are and don't judge or aggrandize them. I like plays that find strange humor in shocking situations. I particularly like genre storytelling - horror, science fiction, fantasy, suspense, noir, mystery. I would like more writers to be telling these stories on the stage, using the tools of the stage. We need audiences to associate going to the theater with having the kind of good time they associate with other media, just translated into our unique terms and techniques. MOST IMPORTANT - I like plays with discipline. I like to feel the inexorable forward movement toward something. When I feel a play drift off course, it really bugs me.

A: Write the sort of plays you would actually set aside an evening to go see even if none of your friends were in them. Don't pretend to like things you don't like just because they seem cultured or deep or something. Be honest about what stories you enjoy, and write your own version, your way. Self-produce when you're young, as often as you can. You learn the deepest and most nuanced lessons from watching your plays fail in front of live audiences. Also, self-producing gets harder as you age. Work on plays in some other capacity - acting, desiging, crewing, something. Learn the physical realities. Fall in love with the basic tools of live theater - human bodies, light, language, maybe music and dance - so that you're writing for the live event, not putting TV shows on stage. Write short plays. You must do this. Learning to write short plays makes your longer plays so much better. Do those 24-hour/48-hour play exercises. Get involved in short-play events. There's no better way to learn discipline. Forge relationships with theater artists you trust and who trust you. Especially, ESPECIALLY directors. Dig in for the long haul. Seriously. Seriously, playwrights-just-starting-out. Don't be like, "I'm different." Dig in. Enjoy the stuff you get to do during the long haul.

Mac Rogers is the reason I became a playwright--or at least one of the top three! Thanks for all the interviews, Adam. I'm enjoying them.