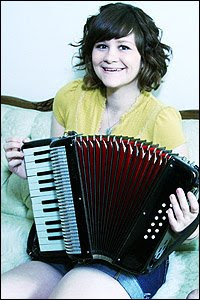 Q: Tell me about the play you have going up at the Atlantic. How did you come to write this play? Who is the artistic team? What sort of development process did it go through?

A: I wrote the first draft of the play when I went home this time last year to send my little brothers off to Iraq. It was great to see how reverently they were treated that weekend, with so much respect, all of the 'Oohrah!'s' from the old vets at the Church. I wanted to write something about what it is emotionally, not politically, to be or love a soldier. This is my second attempt at a play about the military - having three soldier brothers, I've always felt called upon to shine a new theatrical light on the Service - but in the past I've pretty much mucked it up with metaphor. Hopefully I got it right this time. The play had a reading at Ars Nova which was infinitely helpful, Leigh Silverman directed. A producer from a small company in London was at the reading, and approached me about putting it up at the Finborough, which happened in April. I got to go see it, which was again infinitely helpful - wrote a new draft after for readings at the Roundabout, and then finally at the Atlantic. It's been really nice because the development process has moved pretty quickly, but I've been able to fix inbetween! The incredible Evan Cabnet is directing - we met in play group at ars nova, and he's been with the play since the Roundabout Reading.

Q: You were the playwright in residence at Ars Nova this past year. What was that like?

A: Ummm, rad. I really like them a lot so it's cool to feel even more a part of the family. I get sent as a 'scout' to see things (which is great, makes me see more stuff, stuff I wouldn't normally see) as well as read submissions. The residency also comes with a commission to write a new play for their space - which was pretty terrifying at first. I literally had no ideas. I was brain dead. When someone you respect says hey, I like what do you do, now do it for me! Of course at first you totally choke, which definitely happened to me! I finally started working on 'Be a Good Little Widow' for them which I'm really excited about!

A: In addition to Widow, I'm working on Cutie and Bear (a commission for the Roundabout Underground) as well as a new play for Naked Angels. I'm a part of the writing staff for Naked Angels Naked Radio which is pretty much the funnest thing ever invented. Ever. I write monologues for actors (Bekah's homemade monologues) which is the best sort of mind-exercise, and am finishing up 2 screenplays for 2 small production companys in LA, which is extremely daunting, because I am very bad at screenwriting but desperately trying to get better!

Q: How did you come to start writing plays?

A: I wrote (very bad) poetry and stories starting when I was very little, and always identified myself as a writer. I started doing theater in high school to sorta break out of my shell - then decided to study theater, with a minor in fiction and poetry writing, at UNC Chapel Hill. I pretty quickly realized that I sucked at acting, and it dawned on me that I should write a play! I was hooked from the get go. It made me feel special, it challenged me, it was social but solitary. It's pretty much my favorite thing in the whole world.

A: Plays that are poetic, visual, hilarious, AND grounded in a really good story. Stuff that invites you in rather than distances you. Stuff with people who can really sing and it breaks your heart. Plays about people trying to be Good.

A: 1. Write. You have to write or you won't get anywhere. Try your best not to second-guess yourself or let your demons take over. Try not to compare yourself too much to others. JUST WRITE! 2. Do. Don't sit around waiting for the theaters to come to you, do it yourself! 3. Submit. A lot. Don't be intimidated - just email it , pop it in the mail, then forget it ever happened. Worse things worse, you get a polite rejection letter or email. Fortunately, if they don't like it, they do not come to your house and spit on you!

What an inspiring thing to see a young woman playwright put a different perspective on the military. I will definitely check this one out!