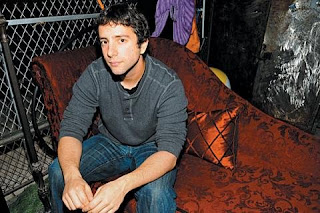 A: A few things. I'm working on a play called COMPLETENESS about love and computer science that I keep returning to, every once in a while, for the last few years, and have struggled with. But I think I've cracked it now and am working on a draft that I might finally want to go to the next step with, a reading, or whatever. I also spent the last two years or so working on my first two musicals, and both of them are now at the point where they're ready to be up on their feet, at least in the workshop phase. One is an original piece about Reality TV and the other is an adaptation of the Jonathan Lethem novel FORTRESS OF SOLITUDE, and I'm pretty excited about both.

Q: You are, I would estimate, one of the 2 or 3 playwrights around my age who are actually making a living writing plays. How do you do it?

A: You call this living? No but seriously. The literal, boring answer to your question is that, between royalties from production, advances for publication, and commissions for new work, you can cobble together enough bits and pieces to live. Personally, I haven't had, like, a big commercial transfer that I made a killing on, so it's always been that way for me: piecemeal income. Some years there's lots of pieces some years there's not so many. A big part of that was that I was very fortune to form relationships, early on, with some of the large regional theatres, like Portland Center Stage, and the Old Globe, where the royalties are really quite good. If you get produced somewhere like Milwaukee Rep or ACT Seattle, places like that, you really only need one or two of those a year to get by. I should mention that I'm also relatively frugal as a person and that I don't have any kids. Another way of reading your question, of course, is, well, okay, so then how do you cobble together enough of those bits and pieces? How do you form those relationships? And I don't think there's any one answer to that. Everyone seems to have their own path. And whatever answers I might have I'll save for your question further down about what advice I'd give to young playwrights. Anyway, in a sense, I'm the least qualified person to explain why things happened for me the way that they did.

Q: Tell me a story about your childhood that is funny or sad and explains who you are as a person or writer.

Q: Do you have any sort of writing routines or rituals?

A: Yeah. I try to do a few hours first thing every morning before I do anything else so that it's out of the way before anything else I might do that day intrudes. This works well when I'm really in the grip of something and can be excruciating when nothing has grabbed me but I think it's important to show up every day. Then maybe I'll work some more, sporadically, for the rest of the day. How much depends on the momentum I've got built up. I take a lot of breaks. Like the one I'm taking right now to answer these questions.

Q: How do you deal with the pressures that come with productions and the reviews that follow?

A: The pressures of production are all, for me, internal. The benchmark is: did I do everything that I possibly could, as honestly and diligently as I could, to make this into something I believe in? If the answer to that question is yes, then I tend to feel okay, no matter what the reviews say, and if the answer is no, I am filled with shame and self-recrimination, likewise irrespective of reviews. "Doing everything" by the way does not always, or even often, mean imposing my own will. It has more to do with listening to the piece as it comes to life, listening carefully enough to discern what it wants and needs, from everyone working on it, and to obey that, even when it is in conflict with what I thought I was making. Doing that takes up so much internal space that there isn't really any room left to worry about "the pressures that come with production." In fact, I'm not even sure exactly what you mean by that. As for reviews: I haven't found anything that works particularly well for dealing with them. Reading them, not reading them, reading only the ones I hear are good, it's all pretty much the same. I always feel really vulnerable to what they say or what I hear they say third hand in spite of, or maybe because of, how tossed off and thoughtless and uninformed they also often are. But a really engaged review that really gets what you did and why can be invigorating and make you feel less alone. So maybe it's time to redefine "something that works for dealing with them." Because if by "works" what we mean is a method whereby we are protected you from having any feelings about the reviews then it's possible we'll always fail. So maybe a better approach is to accept that you're going to have those feelings, that you can't just think them away, and just feel them. Or, to put it in terms of THE WIRE: "The game is the game. Always." If nothing else, this frees you up to apply your energy towards writing the next play, which is where it belongs, instead of towards mentally defending the last one, which serves nothing and nobody.

A: Any one that has comfortable seats.

A: Oh lots. The most important thing is the work, to put the work first, to be your own fiercest critics and your own staunchest defender. Be honest with yourself about the work, about when it's not done, about when you need to lean more and try more and take your time. And then don't take no for an answer when you've got something you believe in. There are so many groups to join and places to have readings and email interviews to give that it's possible to kick up a lot of dust and feel like you're "in the mix" and then look around and realize that you haven't done any actual work for two years. Avoid this. All that other stuff, all the institutions, all the grants, the parties, especially the parties, all the trappings that have sprung up AROUND writing for the theatre are actually unnecessary for doing the most important part of your job, which is to sit the fuck down and get it done. In fact, a lot of the rest of it just gets in the way a lot of the time if you let it. All you have is the last thing you wrote. That, and the next thing you're going to write. And now to contradict everything I've just said to say that you also need everybody else because this business in collaborative and there are all kinds of decisions that are out of your control but that you want to go in your favor and there are a few ways to make that more likely: Knock on a lot of doors. Begin to treat rejection as totally neutral and anything shy of rejection as enormous encouragement. Remember that your collaborators, actors, directors, designers, have careers that are interdependent with yours, not in competition with yours, and that those people are often even better conduits for your scripts than your official agent. I got my first few productions because actors or other theatre professionals handed plays of mine directly to the artistic directors who had worked with them and trusted their judgment which meant that my work actually got read instead of languishing for a year in a literary office. Oh, yeah, avoid literary offices whenever you can. Even if the two layers of interns pass your script along to the literary manager, and even if the literary manager loves your script, the artistic director will thus be predisposed to dislike it because ad's want to discover plays on their own. Once you have relationships, maintain them. Work with people you genuinely like so that you can do this without feeling fake. Don't fixate on one particular opportunity or institution or goal as some sort of threshold beyond which is only joy because the struggle will be over and everything will be easy from then on. No such threshold exists. The struggle, the struggle to write each play, IS the joy. I mean, right?