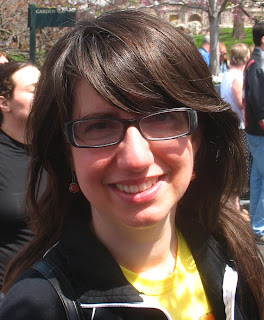 A: I’m currently writing my new play Hack which will debut in the Vampire Cowboy's Saloon Series kicking off Sept. 12th. It's about how three hackers, who all work on the same I.T. team, are forced to pull an all nighter at their big shot company to fight a virus but things get personal when they discover it must have been planted by one of them. I actually just started writing it at the Voice & Vision Theater’s Envision retreat up at Bard this summer. It asks what's more important in these troubled economic times - keeping your job, friends or challenging the system and ultimately climaxes into a kinda showdown of the Good, the Bad and the Geek. When I was asked to be a part of the Saloon Series with the other amazing writers (Dustin Chinn, James Comtois, Brent Cox, Jeff Lewonczyk, Mac Rogers) I thought this idea would be a perfect “serialized play” as the work is shown "episodically" one Saturday a month at Battle Ranch from September to January. It’ll be directed by John Hurley who I’m excited to work with. Also the recent workshops of The Sleeping World (Rattlestick, Side Project in Chicago, MCC Theatre Playwrights Coalition), which is about four playwrights who come together to read their dead friend’s play, have been incredible. I’m on the verge of finishing the next draft that is really exciting.

Q: Can you talk about your musical? What's going on with that?

A: That’s Andy, about a boy who wants to play Annie, is a musical that I'm working on book/lyrics for with the creative team (Kevin Carter, Bobby Cronin). It's a terrific piece that was conceived by Bobby who brought us together. We've all learned a lot working on the piece over the years and something recently just clicked - there's something about where we all are now creatively that is resulting in some of the best work we've ever done in our development of it this summer. Whole new opening and direction that’s rocking my world. Kevin Carter’s kick booty score blows me away. Like Daniel Goldfarb just expressed in your interview with him – seeing a song or a musical moment come to life that you were a part of is really thrilling. It’s some of the hardest work you’ll ever do because ultimately you’re working hard to create something to exist effortless on all three levels – book, lyrics & music – yikes! - but it can reach people emotionally in a whole new way. And what I’ve always loved about this musical is how it's so unpredictable and fun but asks tough questions about the times we live in. It also features a chain smoking Mary Martin dressed as Peter Pan – and what is there not to like about that? I'm happy to say it'll be directed by Clayton Phillips in a workshop at the York Oct. 6th at 3 PM. It’ll feature a slew of awesome talent including Beth Leavel and Lauren Kennedy.

Q: You've worked with Rising Phoenix a bunch. Can you talk about the plays you did at Jimmy's No. 43 and your collaboration with Daniel?

A: If you've met Daniel Talbott, you know he's awesome. If you haven't, then you'll meet him at some point and think - oh, he's awesome! I was lucky to work with Daniel, Artistic Director of Rising Phoenix Rep, as he directed my "ghost story" plays The Telling Trilogy a few years ago which were done at Jimmy's No. 43 by the company. It was an amazingly fruitful collaboration. We’re really proud of the work we did, and of the great actors work on it - for those who haven't checked it out - it's published in Plays & Playwrights 2008, along with two other plays produced by Rising Phoenix Rep (by Daniel Talbott & Daniel Rietz). We also became really close friends over many chai lattes, and various NYC adventures while chatting about plays. This year Daniel directed my two new plays Nobody and Birthday for Rising Phoenix Rep which was a huge step for me artistically. The given circumstances for Birthday – why Leila & Kyle needed to stay in that room – the outside world they were trying to escape - was so clear to me through our process that it really created a believable 45 minutes where two strangers changed each other's lives. It captured a personal truth that was new for me in how it unfolded in the room - a real turning point that I dove back into all my plays with. Rising Phoenix and my work with Daniel is a major part of that artistically for me and it has been really cool.

Q: What's it like to be married to a comic book writer?

A: Super-tastic and full of sound effects like super-tastic! Seriously. How could it not be crazy good fun? Putting my wife-hat aside, Fred is one of the best writers I’ve ever known – his comics, screenplays and short stories continue to be a great influence (now more than ever as I’m working on DougToons, a webtoon online). And it’s the best to hear when a director or playwright friend of mine loves X-Men Noir, Hercules or Action Philosophers as much as I do.

A: Part of the reason that Hack, the new play, is so timely for me is that I just found out that I’m going to be laid off from a dayjob I’ve had for about three years as a receptionist in an architectural firm (where I've pretty much written everything from Telling Trilogy to Sleeping World to Birthday). But it’s time. The past year has been a great step for me and almost all my work has been commissioned or paid for. So I’ll be putting my efforts towards writing for a living and developing opportunities for that.

A: 1. Theatre that has a personal, unique story told in an original way. 2. That has real truth. 3. That has beer. A play that lets you drink booze while watching is awesome.

A: Each new play is another step on your journey. It may get produced tomorrow or in five years. Who knows? Yikes! Write it, and develop it, but also at the same time move on. The answer always seems to be in the next play. And keep sharing your work – that’s how you find the right folks to work with!

A: Join me at the Vampire Cowboys Saloon Series – where there’s beer)! (http://www.vampirecowboys.com/index2.htm). And if you like musicals or want to check out That's Andy, play hooky or get canned like I did and come on down to the York Theatre (http://www.yorktheatre.org/) on Oct. 6th at 3 PM.
Posted by Adam Szymkowicz at 8/14/2009 07:51:00 AM

I suppose every person must read it.