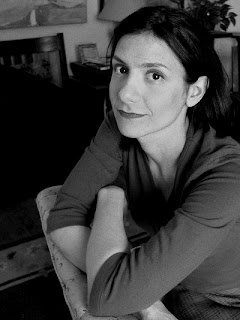 A:  It's not a go yet, but I am working with a film producer to option and then adapt a book by Joy Williams called "The Changeling"--no relation to either of 2 movies with that title.  The book is scary and sort of hallucinogenic; an alcoholic narrator is seeing stuff that may or may not be real.  The story draws a lot on fairy tales and myths.  So I have been researching myths and fairy tales--"animal groom" stories, specifically--for that project.  I'm also researching/reading for the next play I want to write which, I think, has something to do with internet pornography.

Q:  You're one of the playwrights who has written for Law and Order, that New York institution.  What was that like?

A:   It was very, very good for me in a couple of ways.  It disabused me of some romantic notions about writing.  The time pressure to getting the episodes written helped me see that showing up really is half the battle.  Inspiration and ideas spring from the action of writing, so a lot of the mooning around and planning I tend to do before I really get in the saddle and START seems like procrastination now.  Not entirely, but... I've learned to do less of it, to have the guts to sit down and write before the play in the brain feels 100% there.  And writing TV is a good paycheck.  I was hand-to-mouth for such a long time, it was a big relief not to be living in financial panic.  Also, I think that show in particular was a good adjunct to playwriting because it was so plot driven.   I never felt creatively split and I think I might have if my TV job had been, say, "Madmen" or some other show where you're crafting long-range, nuanced character arcs.

A:  I was a really macabre, little gothette of a child.  I was fixated on dead children.  In the village in Pennsylvania where we spent our summers, I went to the graveyard and wrote down the names and dates from all the kids' graves.  Then I went around interviewing my elderly aunts about why they had died.  And I saved all the news clippings about a boy who disappeared near my home in DC.  I had a Life Magazine about the Yorkshire Ripper that I used to read and reread obsessively.  I think I still have that, um, orientation.  My pleasure reading is true crime and my Tivo is backlogged with it.  So I think a lot of my writing has been about figuring out where that impulse comes from and what it serves for me.

A:  Loved it.  I got paid to write for 2 years and the plays I wrote were produced.  They were shoestring, throw 'em up campus productions, but you learn stuff from productions that you just can't learn from readings.  So that was invaluable.  And Paula Vogel gave me some amazing tools that I can pull out of my back pocket when I'm stuck.  She's a purist.  She really believes that great writing will come if you push yourself beyond your safety zone.

A:  I am never happier than when I leave a theatre feeling the stirrings of a good argument.  I like plays where the audience fractures over who the good guys are.   I used to love teaching "Oleanna" for that reason.

A:   Read plays.  Read a play a day.  Some of my best ideas have come from reacting to plays... wishing the writer had gone further, sometimes, or feeling an ending didn't ring true.  I'm inspired when I feel my needs and expectations aren't met and I have to go fishing in the deep Gina waters to ask why.    Also, read for structure.  There are plays I have read and re-read and mapped because they work so well.  It's good to, like, take the back of the watch off and see how the gears move.  Donald Margulies' "Dinner with Friends" is one that I really studied because it packs such a wallop and looks, on its face, so simple.

A:  Not for my own work.  I've got nothing up right now!  I liked Tracy Letts' new play, "Superior Donuts," a lot, and Annie Baker's "Circle Mirror Transformation."  And I think I liked them for the same reason.  The characters are living "small" lives, by which I mean... no blood, death, war, politics.  But within "small lives" (see "Our Town") there are enormous cataclysms and I love to see writers that appreciate that and truly care.
Posted by Adam Szymkowicz at 10/08/2009 03:37:00 PM