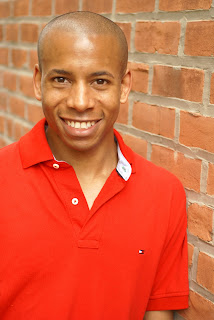 Current Town: Brooklyn, NY (Bed-Stuy and proud of it!)

Q:  Tell me about the play you're doing with the BE company. (and link please)

A:  The play is called MUDDY THE WATER. It's about what happens when a prominent minister at a Kansas City church disappears after an arrest for cruising and solicitation in a local park. The focus of the play isn't so much the minister, but how everyone within the church community is forced to reveal their own secrets, prejudices and examine their relationships with each other and their faith.

I'm supremely lucky because this is a pilot program being offered by the BE Company that they're calling The WorkBEnch Series. It's a developmental opportunity where the script is workshopped with staging and design elements thrown in. Then, we take a break in the middle of the performance period to take in audience reaction, rework the script, rehearse and then complete the rest of the run. So far, the experience has been sort of like being a theatrical mad scientist, but the collaborations with my fantastic director (Martin Damien Wilkins) and this ridiculously amazing cast have really helped move this piece along.

Q:  While you were at Juilliard, you had a show at the Alliance. Can you tell me about the play, the program there and what it was like? Also what did you think of Atlanta? (My current town)

A:  So. The play I had up at The Alliance was called FALSE CREEDS--it's the story of how a young man discovers his family's involvement in the Tulsa Disaster of 1921. For anyone who might be in the dark about that historical event: 1920s Tulsa, Oklahoma was the home of Greenwood, one of the most prosperous black communities in America--so prosperous, in fact, that it was known as "The Black Wall Street." In June of that year, however, a white mob swept through Greenwood, burned it to the ground and murdered hundreds of residents. My play dealt with not only that one horrific day, but also how a family began to try to put their life back together.

The Alliance production came about because FALSE CREEDS won their Kendeda Graduate Play Competition while I was at New York University. The competition is aimed at playwrights who are in their final year of a graduate program--the winners are given a full production in The Alliance's season. In addition, that year The Alliance partnered with The O'Neill Playwrights Conference to offer me a residency there that summer to do some intense development of the piece ahead of the Alliance premiere.

Honestly, that entire experience was sick--I mean, just truly amazing. When Celise Kalke called me from Atlanta to tell me I had won, I was at a place in my head/life where I was seriously doubting my abilities as a writer, I really needed to hear that I was saying something worth hearing. That phone call began a year-long process of really learning what play development was like from the inside. Throughout the O'Neill and Atlanta productions I got to knock heads with some of the most gifted artists and professionals I have ever encountered. What really floored me though, was that all of these people were really earnestly working to make this play the truest representation of my vision possible. Which is not to say that everything was all bubble gum and lollipops (Drama draws drama, folks), but it was an experience that there is no substitute for.

As for Atlanta, heck, who could complain about being below the Mason-Dixon Line in the middle of February?! The Alliance was a great temporary home--they took such excellent care of this know-nothing kid from Kansas clutching his little script. What I think would surprise some people is just how vibrant the arts scene in general is in Atlanta. While I was there, I had the chance to see gospel performances, the premiere of Pearl Cleage's A SONG FOR CORETTA, artwork on loan from the Louvre, local rock bands...there is plenty going on. I'd do a show down there again in a heartbeat (y'all heard that, right?!)!

A:  I'm trying to wrap my head around some new play ideas I've had recently: History colliding with science fiction and social politics. There are some musical pieces as well that I provided text for that could seriously use some rewrites (as long as play development takes, operas and musicals are a flippin' eternity). Right now though, most of my attention is on shaping MUDDY THE WATER and getting as much out of that experience as possible--multi-tasking has rarely proven to be my friend.

Q:  Tell me a story from your childhood that explains who you are as a person or a writer.

A:  When I was a kid, I remember one of my uncles was known to be quite the Ladies' Man. Despite having been in a loooooooooooooooooooooong term relationship with a very lovely woman, he would quite often bring his latest jump-off over to my parent's house, believing full well that he needn't worry about my parents revealing his indiscretions. One day, after my uncle introduced me to his latest "friend" (she said I was very charming), it became quickly apparent to all the adults that I was no fool and that I knew this cheap broad was certainly not the "Auntie" I was used to seeing my uncle with. My dad pulled him aside and said: "Hey man, look here now, don't you get angry at Darren if he starts runnin' his mouth one day and lets loose that you been bringin' all these women by here. That's your fault brotha, and then, I'd have to kick your ass myself."

Now, what I find interesting is less that my dad threatened my uncle (that was par for the course), more that he already knew my personality even at that young age. To this day, I am still nosy, messy, and occasionally itchy to instigate conflict. So instead of subjecting real people to that, I do it to my characters.

A:  Anything with an element of surprise and some theatrical magic. A compelling story that won't let me turn away.

A:  I have to sort of laugh at that one--that's pretty much giving advice to myself. I guess I'd say two things I've done for myself so far that I think were truly worthwhile were 1) I got over the fear of exposing myself in my writing--whatever is the most personal tends to be the most compelling, and 2) started to surround myself with creative, diverse theatre artists whom I could respect and look to for both inspiration and support.
Posted by Adam Szymkowicz at 10/07/2009 06:53:00 AM