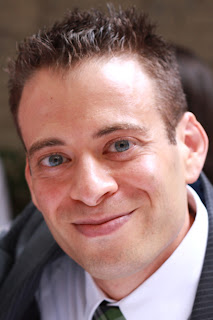 Q:  Tell me about All The Way From China.

A:  It's is a thriller about three people greiving an unsolved murder. Ars Nova and the New Group did readings, and it's now the inaugural production of the Mad Dog theater company at the Gene Frankel Theater. The central conflict is between Jack, who dropped out of college last year when his girlfriend was killed, and Ralph, a classmate who shows up claiming to have new information about the crime. The play asks how close someone has to be to a tragedy to be entitled to mourn it. How do we share our grief, how do we hoard it, and how far might we go to claim our part?

A:  Woman of Troy, a comedy about the women who wrote the Iliad. I pitch it as Shakespeare in Love meets Mary Zimmerman's Metamorphoses. Bycatch, a sort-of sequel to Moby-Dick in which Ahab and Ishmael both survive the sinking of the Pequod and time-travel through two hundred years of American overfishing. And I'm updating my one-man show Hoaxocaust! for production in 2011. It's about a young Jewish man disaffected by Israeli policies who longs to separate his ethnicity, religion and politics. He decides the only thing yoking him to Zionism is the inconvenient fact of the Holocaust, and goes on a journey to interview (real) Holocaust deniers around the world.

A:  Ticket prices. My friends and I are among the most passionate supporters of theater in the world--and even we decide what to see based on where we can get comped. What does that say about attracting audience members from outside our community? I realize this is just one head of the hydra that is theater economics, but I do think that subsidized ticket programs, pay-what-you can previews, and similar intiatives need to be replicated and advertised as widely as possible.

A:  Sondheim. I am a playwright because of two things: (1) the first national tour of Into the Woods; and (2) Young Playwrights Inc.

A:  Write everyday and call yourself a writer. Read books, see plays, and watch TV--know your fellow travelers. Realize that you're as unlikely to find ultimate fulfillment in being a playwright as a laywer is in being an attorney. Have a hobby. Have friends and family outside the business. Have a teleplay.