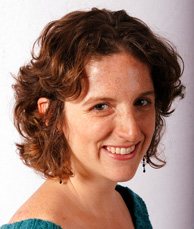 A:  I’ve got a couple plays brewing. WE ALL FALL DOWN is about a family of cultural Jews attempting to have their first Passover Seder. It’s a dark comedy, like most families, and it’s my first play with an intermission. Then there’s THE LIGHT PRINCESS, which is a musical for young people or people who remember being young. I’m working with a fantastic composer named Mike Pettry. We adapted the story from an old British fairy tale about a Princess who is born with no gravity. My play 100 PLANES is about two female pilots in the Air Force. It explores how women treat each other in the workplace. I’ve been developing this play with The Lark in NYC and we have a Studio Retreat coming up in February. Finally, I'm starting something brand new. Like in utero new. I’m developing it as part of the Center Theatre Group Writers Workshop in Los Angeles. It may have something to do with twins. It may have something to do with quantum entanglement. It may be about personal hygiene. I have pages due next week. We shall see.

Q:  Tell me about WILDFLOWER

A:  WILDFLOWER is a play that I wrote during my second year in grad school. I heard about a Wildflower Hotline in San Diego and I was intrigued. How could flowers be urgent enough for a hotline? When does something beautiful become dangerous? And then it hit me. Adolescence. Adolescence is when something beautiful becomes dangerous. So, WILDFLOWER explores the discovery of desire and its consequences. It's about the adolescent in all of us. Chris Burney from Second Stage saw the UCSD production of WILDFLOWER and two years later he produced it as part of their Uptown Series. It was a beautiful production directed by Giovanna Sardelli. It was thrilling to have my Off-Broadway debut surrounded by such a supportive and talented team. WILDFLOWER is now available through DPS if you’re interested in reading it.

Q:  Tell me about your current residency

A:  I am the very first Playwright-In-Residence at the Kavli Institute for Theorectical Physics at UCSB. It’s pretty cool. There are some amazing characters walking around. Yesterday I met a man who works for the Bureau of Standards, which is in charge of universal measurements. They keep track of things like the meter and the kilogram and the volt. The man I met is in charge of the second. He makes sure our measurement of the second is as precise as it can be. It’s fantastic what people are working on at Kavli. I’m collecting wonderful ideas for future plays. I’m also leading seminars that teach scientists how to craft their talks into compelling stories and how to be good storytellers for different audiences. It’s an inspiring place to be.

A:  I long for an accessible theatre, an affordable theater, and an immediate theatre. When I used to direct, I loved working for an outdoor Shakespeare company that performed in local parks all over New York. The shows were free and they were in neighborhoods where people lived. The neighborhood kids would come see the shows every night. It was magical.

A:  See as much live theatre as you can. See dance and music too.

Find other playwrights and share your plays and experiences.

Find collaborators you love and make things with them as often as you can.

Live a life outside the theatre. You’ll have more to write about.

A:  Get your own copy of WILDFLOWER at DPS http://www.dramatists.com/cgi-bin/db/single.asp?key=4156

Check out The Playwrights Union in Los Angeles http://playwrightsunion.com/