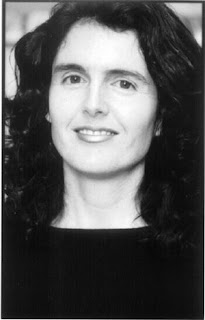 A:  I'm working on my play, Paloma, which had a great reading at the Open Fist Theater Company in Los Angeles last August. The play explores the lives of a young inter-faith couple in 2004 New York City and Madrid and how their religious differences threaten to demolish their love. The play is inspired by a gorgeous fourteenth century Muslim Spanish text, Ring of the Dove by Ibn Hazm, that considers all the permutations of love.

I've also translated an acclaimed Spanish play, The Gronholm Method, by Jordi Galceran, which was produced in Australia last summer. Galceran's play has already been successfully produced in Spain, Latin America, Europe and Russia with a current revival recently opened in Barcelona. A dark comedy about four job applicants vying for a top corporate position, The Gronholm Method examines the question: How far would you go to land your dream job?

I'm also just starting a new play so I can't say too much yet only that I've been studying the works of Mexican visual artist, Martin Ramirez, as inspiration. I'm working on the play as part of my Moreau fellowship in the department of Film, Television and Theatre at the University of Notre Dame. We're aiming to workshop the play next year at Notre Dame.

A:  I traveled to Barcelona from Massachusetts with my Spanish father when I was seven. We went to visit my great great uncle, a celebrated Spanish painter and sculptor. I walked through Tio (uncle in Spanish) Vicente's home gallery in awe of his work ranging from striking portraits to an expressionistic series on circus performers to stunning sculptures of voluptuous women. Tio Vicente wore a burgundy bathrobe and had long white hair down to his shoulders framing his cool chunky horned rim glasses. I held onto my dad's hand as my young mind soaked in this artistic abundance. I treasure the black and white photo from that day: I lean into my smiling dad, holding his index finger with a look of contentment on my face, next to my serene Tio Vicente.

This story contains many elements of my journey as a writer. As a Spanish-American, I gain much of my inspiration from the Latin world and often write about how the Anglo and Latin worlds collide, intersect and transform each other. I also draw huge inspiration from my father's Spanish family of artists. Dealing with loss has also been an area I've continually explored as a writer. My father passed away while I was in college. Surviving the death of a parent has greatly shaped who I am. Learning how fleeting life can be fueled my passion to pursue my writing.

A:  If I could change one thing about U.S. theater, theater companies would produce a wider, broader range of plays by women and men who fully represent the cultural complexity of twenty-first century U.S. culture. Theatergoers would then have access to a huge selection of diverse theatrical worlds that would challenge, entertain, delight and intrigue them. The U.S. theater would be on the cutting edge of social change and an apt mirror to contemporary society.

A:  My theatrical heroes who are with us in spirit only include Federico Garcia Lorca, Lope de Vega, Sor Juana Ines de la Cruz, William Shakespeare and Tennessee Williams.

My theatrical heroes who are still with us in body and spirit include Maria Irene Fornes, Nilo Cruz and Griselda Gambaro.

A:  I am excited when I go to the theater and see a play that is culturally complex, linguistically innovative, aesthetically adventuresome, impeccably produced and has a running time of less than two hours.

A:  Keep writing. Trust your instincts. Find your tribe. Produce your own work at least once. Try directing your own work. See a ton of theater to hone your skills and discover what you really like in a play. Read widely. Know that in most cases you will have to do something in addition to playwriting to earn a living so find that work which you enjoy and gives you time to write. Buy the Dramatists Sourcebook and submit your work to lots of places that appeal to you. Cultivate a spirit of generosity toward your peers. Playwriting is a marathon, not a sprint. Continue on the journey and know that there are many definitions of success. And above all, always, always keep writing.

A:  My play, Desert Longing, was just published by Playscripts. It's part of a wonderful collection of short plays about Latino history in California. http://www.playscripts.com/play?playid=1544

Check out these wonderful playwrights' websites too: