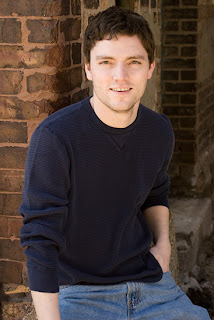 I'm a playwright and actor as well as a founding member of The New Colony in Chicago where I serve as Associate Artistic Director.

A:  I'm currently in NYC for the week with my company The New Colony. "5 Lesbians Eating a Quiche", a comedy I cowrote that premiered in Chicago last summer, is playing at the Living Theater for NYCFringe. I have been busy running around handing out postcards, loading the set in and out each night and having a blast with my fellow company members. If you see someone pushing a dolly full of styrofoam quiches up and down Clinton Street this week, that's me. Say hi!

I am also almost finished with the first draft of "The Bear Suit of Happiness", a drama I am writing for The New Colony that will be premiering in February 2013. It tells the story of four American soldiers in WWII who are assigned to perform in a drag revue for the men in their camp. The four actors began workshopping their characters this past February and we will be holding our first public reading for the piece in September.

I also perform and am gearing up for rehearsals to begin on "Down and Derby" a new play by Aaron Weissman about a roller derby team in Ohio. I play Tasty, the salsa-selling home announcer for the Misfit Mavericks of Larkin City. It's a ferocious cast of actors and I can't wait to jump into the rehearsal room with them when I get back to Chicago.

A:  When I was 9 or 10, I made a movie with my older sister Carrie and our two cousins Jennifer and Jessica. They were in town for Easter and we stayed up all night making it so we could show our parents. We had been working on it for hours and we kept hearing our parents yell from downstairs that it was getting too late and that we needed to wrap it up. So I would run downstairs and explain that this was going to be the best thing they had ever seen in their lives, but we needed them to be patient. I think it was after 1 am when we finally got around to screening the movie for them. Even though the movie was 10 minutes of odd British accents and fart jokes, I had never seen our parents laugh harder at anything in my life. They were probably a little drunk by that point since we had taken all night to finish, but still. I think that was possibly when the bug to do theater hit me the hardest, and I started auditioning for plays pretty shortly after that. The experience also solidified the kind of writer I would eventually become. I'm best working collaboratively and even better if I am under a strict deadline. If my dad still yelled at me from the bottom of the stairs to hurry up, I would get so much more writing done.

A:  I wish theaters would work harder to engage their audiences before a show begins, and I wish audiences would be willing to be taught a new way to prepare to watch a show. You're about to communally share the experience of a lot of hard work by a lot of artists. Meet the people around you, grab some drinks at the bar, get excited that you are about to experience something that will never be exactly recreated ever again. Don't just sit there and read your program. In fact, don't even have programs! Post some photos and bios up on the lobby wall and make your programs online-only. There have been so many times that I walk into a theater excited about what I am going to see, only to be sitting in a quiet room hearing rustling pages and watching people check their watches fifteen minutes later. The experience of the show should start when you enter the front door of the theater, not when the lights go up.

A:  I'm working with them. Cheesy, but true. The New Colony is a group of actors, writers and designers who have spent the last four years creating original plays and musicals written from within our ensemble. They constantly amaze me with their dedication, ideas and willingness to make complete asses out of themselves. Every time the inspiration well runs dry, I look at what this group of people have dedicated their lives to doing: braving the Chicago winters while juggling families, relationships and day jobs just so we can all spend our evenings in a rehearsal room trying to tell interesting stories. You can learn more about those weirdos here: http://thenewcolony.org/company/company

On a more general note, I think "heroic" is a great way to describe the Chicago Theater Community as a whole. The New Colony exists in Chicago because there is an audience for what we do there, and that audience is there because of all the giants who are around us and who came before us. I think almost every successful theater company in Chicago is only successful because they set out to do something completely different than what everyone else was doing. I truly believe originality is not only encouraged in Chicago, but welcomed. I'm so proud that we are a part of that community.

A:  New work. I rarely go and see a show that I have seen done somewhere else. Obviously, there are exceptions, but for the most part I want to see new stories and hear fresh voices.

A:  Oh lord. One playwright's process can be completely stifling to another, so watch who you take advice from. That's my best advice.

My collaborator and sounding board on "The Bear Suit of Happiness" is the director of the show Sean Kelly. Sean is often the first person to read my pages after I have written them. He has a great note that he cribbed from Margaret Wise Brown's editor: "NGEFY". It stands for "Not Good Enough For You". I love that note. So I guess my next piece of advice is to find someone who you love and trust who can tell you "NGEFY". Sometimes you need to hear that.

A:  "5 Lesbians Eating a Quiche" has three more performances at The Living Theater this week: Wednesday the 15th at 10:30pm, Thursday the 16th at 4pm and Friday the 17th at 7:30. You can get tickets here: http://www.fringenyc.org/basic_page.php?ltr=num#5Lesbi

Check out The New Colony at www.thenewcolony.org or like us on Facebook at http://www.facebook.com/thenewcolony
Posted by Adam Szymkowicz at 8/13/2012 08:06:00 PM