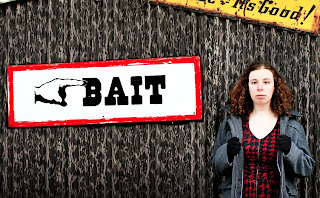 A: Three plays? Three plays! ASHORE: a supernatural play about Theodosia Burr, Aaron Burr's daughter, who disappeared at sea in 1813. THE HUNDRED YEAR FLOOD: a romantic comedy about hometowns and floodplain management. And something I haven't named yet, which thus far is about pop music and women.

A: As a child I never, ever missed an opportunity to mug, and I absolutely never missed an opportunity to push dramatic structure on a situation that had none. There are many examples of this, but the most embarrassing is: when I was in first grade, my family moved, mid-school-year, to a new house in a new school district. I was pretty convinced that this would be a great opportunity for personal triumph. I would be the new kid in town and I would make so, so, so many friends. When new friends did not immediately materialize, I was depressed--until I realized that this was yet another stop on my heroine's journey. On some spring day, I followed my father around while he did yard work, explaining all of this to him. This explanation culminated in a song that I made up on the spot, a song that was about having no friends and how I wanted friends and how I hoped some friends would find me, etc. The song needed to happen, you know? Because once a heroine has stated her wants in song, those wants pretty much show up at her door.

Anyway, eventually I made friends. But not because of the song.

A: Increased diversity, support, and access, all of which I believe could get an assist from amplification. I don't mean microphones. I mean cultural amplification. I mean a change in the way theater is positioned in most peoples' lives. I mean: I think there is so much that's going on in theater right now that is really incredible. I see great shows regularly, I see other writers working hard, I see people making sacrifices, I see people opening up conversations and speaking their minds. And yet I know that most of that takes up a very small slice of the public consciousness, that theater itself takes up a very small slice of the public consciousness. A slice that gets smaller as the other mediums get more and more accessible.

I could be crazy, I could be wrong, but I think that this fix starts in schools. In teaching theater beyond the high school's production of The Music Man, beyond the three Shakespeare and one Arthur Miller play you've got to read (nb. I pretty much love The Music Man, Shakespeare, and Artie Miller). Encourage kids to act, to write, to direct. Encourage community support. Make it clear that theater is not something that ended half a decade ago. Make it clear that this is a current, exciting art. Because it is.

Also if a writing group can be a theatrical hero, then Youngblood at Ensemble Studio Theatre gets the nod. Graeme Gillis and RJ Tolan do so much for so many people; it is actually impossible to do the amount of work that they do. Youngblood was one of the first things I got to put on my resume, and I'm incredibly grateful for the three years I got to spend in the group.

A: Challenge yourself to see, read, hear, and experience other kinds of art. Go to national parks and historic sites. Watch a sport you've never watched. Cook something complex. Ask questions and listen to the answers. Go to your friend's reading on Wednesday night. Give yourself time.