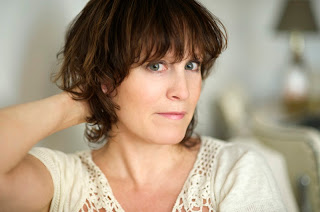 Hometown: This is a weird one for me. I was born in NYC, spent my formative years there, then spent the rest of my childhood raised in London. I am a true transatlantian and I think of both cities as my 'hometown,' although neither of them are a town.

A:  Well, I already wrote two plays which had productions this year – Tesla, which had a sold-out run at Theatre 80 at the end of May, and my short play, Humanogram, which was produced by LoNyLa at the Innovation Warehouse in London and streamed all over the world, in June. I, also, devised a theatre piece about gender with a bunch of talented high schoolers from JKO, courtesy of the Roundabout Theatre. They performed their piece at the American Airlines theatre in May.

So, right now? I am having a rest before I play Margaret in Richard III. Yes, I am also an actress. After that, I go up to Connecticut to workshop my new play, Milk A Cow’s Tail, with a view to production next season. The cast is fantastic and I am very excited.
And, I am going to write a non-fiction book.
And, I have started up my food blog, again. I kept bumping into people asking me to start it up again. Who am I to say no?
Experimenting with food gives my mind a break from writing plays.
Like a great manure on a fallow field.
I'll know I'm ready to write a play again when ideas start to bubble up from the mud. Actually, it already has.

A:  I know this is a cliché, but I was a very shy child. I grew up in an explosive household - lots of drinking and dysfunction - so my defense was to turn inward and not trust anyone. This made me a great observer of people and relationships.

I have a tape recording of my first ever play, which I wrote at the tender age of ten. It was set on Mount Olympus amongst the Greek Gods, but in my story, they have an interloper - Pan and his exploding, magic flute. I gathered all the friends on my street to act it out, like a radio play.
I cast myself as Aphrodite (director’s prerogative).

There is a cast change half way through the recording because some friends had to go home for their dinner. I still remember the crushing disappointment. Didn't they know? The show must always go on! Sod dinner!

A:  The cost of producing theatre in New York. It limits risks in production. I would make space available at low cost for writers and directors to experiment in. That would be a wonderful experiment, wouldn’t it? Hear that, Bloomburg?

A:  Arther Miller and Tennessee Williams. Caryl Churchill. William Shakespeare. Moliere. All writer/managers. And I am a total James Graham groupie. Kristoffer Diaz – LOVE his work. Miro Gavran. He is a Croatian playwright who has a festival dedicated entirely to his work called Gavranfest. Imagine that!

A:  Fantastic story-telling, combined with politics and theatricality. I am a huge fan of Punch Drunk and Kneehigh. I particularly love theatre which is theatre, and not TV disguised as theatre. I loved This House by James Graham. I, also, loved Andrew Upton’s version of The White Guard a few years ago. I do have a soft spot for Gorky and the Russians. Anything Eastern European and I’m a sucker.

A:  Write, write, write. Don't stop writing!
And, once you have written your play, contact everyone you know who has any connection in the industry and ask if you can send them your work.

A:  I am winning an award! For Tesla. From the Tesla Science Foundation. Very exciting. Tesla looks like it is going to London next year. I have already been asked for copies of the script by someone in Peru and in South Africa, so there may be productions out there, too.

My theatre blog, theatrpreneurs.com, for now, via my personal website, sherigraubert.com.

My food blog, for you foodies, is rootgroupie.com. It follows me as I experiment with raw and vegan food.

Oh, did I mention? - I love social media! I am excited to see how technology will impact theatre in the future, which is why it was particularly thrilling to be asked into the Timewave festival. LoNyLa are doing some very interesting work.

And keep an eye out for my book.

I was just asked to be interviewed for the Swiss-Serbian blog, Pufnica.com, for their 'English corner' section. Check it out. And I have been interviewed in the new Tesla magazine. I will be in the first edition, which was just advertised on Facebook, so that must be coming out, soon.

In August come to see Richard III for Shakespeare in the Parking Lot – voted one of the fifty things to do in theatre by New York Magazine – and FUH-REE!!! (Bring a blanket or beach chair. And a fan)

Is that shameless enough?