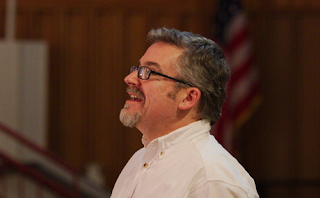 Hometown: Beverly, Mass.Current Town: Framingham, Mass. Sad that I'm still in Massachusetts? I guess it's sad.Q:  Tell me about your OOB play:

A:  I almost never write to prompts, but two summers ago, I saw a call for superhero plays (I had none) and for noir plays (also, none). So I ignored the calls and worked on other projects. And The Maltese Walter popped suddenly into my head, completely.  It's been an adventure. In a little over 18 months, it's had something like 15 productions on three continents. I'm super-excited to be in the Sam French Festival--last time was 29 years ago--and to work with Hey Jonte! Productions, the group that did a great production of a full-length of mine at the NY Fringe last summer. They are fabulous. Every playwright should be so lucky.Q:  What else are you working on now?
A:  I'm a high school theater teacher, so other than devised pieces with my students, my production schedule only allows time to write in the summer, two months a year, but I write feverishly then. I have two full-length projects in various stages this summer: Little Ant Renovation, a sort of magical-realist-kitchen-sink play about what becomes of the immigrant families a couple of generations after coming over, and The Queen of Sad Mischance, about a the relationship between a college student and her boss, a Shakespeare scholar losing her memory.Q:  Tell me, if you will, a story from your childhood that explains who you are as a writer or as a person.
A:  I was one of four kids in my family, much younger than my three older siblings. One afternoon when I was about 10, I found a letter to my older brother on the dining room table, written by a woman who visited often and brought gifts at Christmas. I opened the letter and read that she was glad my older brother had told her about our other brother's deployment to Vietnam. "After all," she wrote, "he is my son." It was a surprising way to learn that your siblings are half-siblings, that your father had a different life at one point, that you didn't really know the people in your house, etc. I guess it's where I got the idea that sometimes the backstory is the important story, and why the forward action of my plays often reveals the past.
Q:  If you could change one thing about theater, what would it be?
A:  I think the biggest change I'd love to see would be in the audience. As a playwright, director and teacher, I'm saddened that so many only want to go to the theater to see a story they already know. I'm lucky to live in the Boston area, where new work is really exploding and building audiences interested in hearing stories that will take them to unexpected places
Q:  Who are or were your theatrical heroes?
A:  I hate turning into a cheese-ball, but mostly it's my students. Adolescents can be amazingly open, clear, powerful and honest as actors and writers. I've also been inspired by almost every actor and director I've worked with on new pieces. And the folks I studied under at Shakespeare & Company long ago, particularly Kristin Linklater and Kevin Coleman. Q:  What kind of theater excites you?
A:  I love when I'm enjoying the entertainment value of a piece and then gasp because I've just felt something I never expected to feel and understood something I never knew.Q:  What advice do you have for playwrights just starting out?
A:  Turn off the editor and just get it on the page. Then hear your friends read it. Then do the real work of shaping and making sense. And when you submit, submit a LOT. The more you send, the more chances you give them to say "Yes."
Q:  Plugs, please:

A:  I'm excited about two full-lengths on stage this fall: a fifth production of Breaking the Shakespeare Code, outside Chicago, and the premiere of Concordance, a hallucinogenic period piece about the line between faith and insanity, in the Boston area.