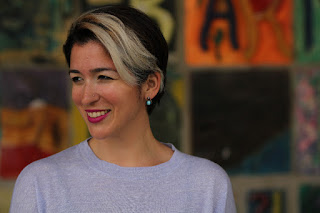 Current Town: I am currently living between Miami and Los Angeles, doing a little back and forth.

Q:  Tell me about your OOB play:

A:  The play is actually inspired by my hometown of Miami. In a sense, it’s about the dangers of the melting pot – that’s an old word, used-up, and sort of a cliché -- but I use it here to say that “transient” places like Miami can get very hot, and not just because you can fry an egg on the sidewalk in the summer. But, because you have a group of people who are trying to survive, or start anew; who are fleeing and fighting and sometimes flying – all within the perimeter of a city sitting near the bottom of a peninsula, surrounded on three sides by water. The kind of news we get in Miami and other big cities often revolves around the clashes that result out of these migrations and mechanisms for survival. I wanted to do a little exploration in this piece as to how someone ends up as a 15 second newsflash, thousands of miles from home -- I wanted the backstory to the 15 second newsflash.

A:  I’m working on the revisions of a play called Grace, Sponsored by Monteverde, which is getting produced out in LA by JustA Theatre. What I love about this company is that they are young and full of the passion you have when you are starting a company, starting an endeavor you really believe in. Their excitement is invigorating. They are also super talented. The same play is going to have a reading in Miami by Thinking Cap Theatre on August 3 of this year – Thinking Cap is one of my favorite theatre companies in South Florida, they take risks, which I really admire. And, Ruddy Productions in NYC, who I’m super excited to work with, is also developing the play.

I’m also working on a nonfiction book called My Cuban Routes. That’s about American Born Cubans and their relationship to Cuba.

A:  When I was a kid I spent a lot of time at my grandparent’s house. My grandmother is Cuban and my grandfather was born in Spain, but often considers himself Cuban because of the time he spent in Cuba. One of the most vivid moments I remember about being in their house was this time that my grandmother saved these tiny birds. They had been nesting in a palm tree, right outside her bedroom window, but the nest fell and the mother disappeared. My grandmother, frantic, went to pick up these birds, which would have been eaten up in a second otherwise. She brought them inside and she taught me how to nurse them. We gave them tiny pieces of bread and I helped name them: Pirouline and Saltarin. One of them ended up dying but the other grew in strength – Pirouline -- and flew all over the house. When we saw that he was strong enough, we let him go. But the power of that story is in what I found out after. My grandmother was so intense about saving those birds, so tragic about their fall from the palm tree. I didn’t understand it until later, when I found out how she had lost her mother. How she had been forced to flee Cuba, leaving her mother behind, and how her mother had died shortly after in Cuba, without my grandmother being able to say goodbye. The story I later heard about my grandmother and her mother gave depth and light to our birds. Stories feeding stories, making lives, building history and family. This kind of thing, over and over again, this is what made me a writer, I think.

A:  If we could all find a way to remember why we do what we do, that would solve everything.

A:  If you really want to do this, do it. It can be magic. But, if you sort of want to do it, do something else. The road to magic is pretty patchy, and you have to fight the crossfire of wands that are trying to make you disappear. I had a painting teacher that told me once that talent wasn’t really anything else aside from guts and desire – I believe that. So if you’ve got the guts and the desire, go for it.

A:  Apart from the plays and companies I mentioned above, there’s another big thing happening. My debut novel will be coming out by Shade Mountain Press in September. It’s called White Light. Shade Mountain is an amazing publishing company, focusing on female writers working in literary fiction. The editor, Rosalie Morales Kearns, is one of my current heroes.

The book will be at selected bookstores and also on Amazon. I’ll be reading from it in Miami, New York, and LA. You can follow me on my events page: http://vanessagarcia.org/events.php


I am so unbelievably grateful and happy that Juggerknot Theatre Company is producing the short (http://www.juggerknottheatrecompany.com). They are this really great company, lead by Tanya Bravo, that bridges Miami and NYC talent. It's such a great idea and I'm so lucky to have them spearhead and take me on.