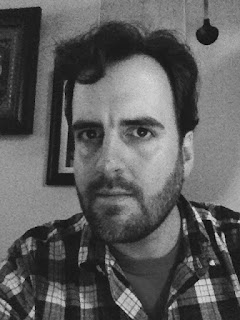 Hometown: I grew up in Highland, New York, but I spent most of my time in the used record stores and bookshops of New Paltz.

Current Town: I’m in Athens, Georgia. I am an Assistant Professor in the Department of Theatre and Film Studies at the University of Georgia.

Q:  Tell me about the Appalachian Festival of Plays and Playwrights.

A:  The AFPP is the developmental wing for the Barter Theatre, which has been developing and producing new work since 1933. The theatre was created by actor Robert Porterfield, who decided to create a theatre that accepted produce as the price of admission (ergo, “Barter”), which was a wonderful way to bring the community in to see live shows during the Depression-era.

The AFPP is headed by Nicholas Piper. Eight plays will be presented as readings between August 20 and August 23rd, but the festival itself runs during the entirety of August. There will be a brief talk-back-session following each reading. My play, FRIENDLY’S FIRE, will be read on Thursday, August 20th at 4PM, following (since we do indeed live in a small world) a play by George Pate, who was a doctoral student of mine at UGA and co-director of the Athens Playwrights’ Workshop, a noncurricular activity at UGA. I’m including a link here for the details for each play:

I also hear Charles Vess has some work at the museum nearby, which I will definitely check out while in town.

A:  Right now, I’m writing an essay and a book chapter. The essay deals with new play pedagogy, and the book chapter looks at the screen portrayal of Marc Blitzstein in Tim Robbins’s Cradle Will Rock. I finished writing a new play, Christmas in the Airwaves, which was commissioned by the Lyric Arts Main Street Theatre in Anoka, MN. I’m also curating a night of student one-act plays as part of the UGA Theatre’s Studio Season, which runs the end of March – beginning of April. I might be heading down to Lafayette, Louisiana (I lived in Lafayette for a couple of years) to work on a new play with Keith Dorwick, who has been my writing partner on a number of projects. Finally, my twin brother and I are in the process of finishing our indie film Liner Notes, based on my stage play. It will be a busy semester, but a welcome one.

When I was six years old, we were renting a house in Rutherford, New Jersey. I was glued to MTV. David Byrne was my hero. The choreography for the Talking Heads video “Once in a Lifetime” mesmerized me. I had to perform it and perfect it. I did this on our front lawn in broad daylight for everyone to see. I had a process. My parents were mortified.

That same year, I was attending Sylvan School (Elementary). My friend Michael had an action figure in the likeness of Lon Chaney from the silent film, The Phantom of the Opera. I promised him two dollars the next day if I could have the figure. He kept the cape. That was fine. I forgot about the money, so the next day when he asked me for it, I was surprised. I had fifty cents in my pockets for the bake sale the 5th graders were hosting. I asked him if the fifty cents would do, and he said “yes,” but only because it meant more cookies and donuts. I have spent a lifetime making up for the lost cookies and donuts that day, however, I still have the action figure. His feet were torn off by one of the dogs we had growing up. But I glued them back on to the best of my ability. He no longer stands, but I swear, in the places on his face and hands where he still has paint, he glows.

A:  I think the biggest change we need to see is not in the theatre itself, but how the U.S. views the role of the arts. I know lots of folks would say "but...but I love the arts! Movies! Television! I have a print in my room! I have favorite records!" And while that is true, the trouble with arts is in order to have arts, you need artists. Artists are the price a society pays for its arts. In the U.S., there are many who feel creating art is a waste of time, despite their love of the finished product. "Oh, I would be a painter, if I had time." "Oh, I would be a writer, if I had the time." Or, that artists are in constant need of ideas "I have a great idea for a story, you write it." "I have a great idea for a song, you create it." Because I've grown up in a culture that does not love artists, indeed, is embarrassed of artists, I have grown inured to companies that mirror popular culture (ie, “I’m doing you a favor – I’m producing your play!”) To be fair, I’ve encountered less of this mentality as I’ve gotten older and found great people to work with (after spending some time self-producing in festivals), but I am worried by the tone of the conversation in which artists in a given practice argue amongst themselves vis-à-vis who has it worse. I do worry that we (artists) are taking it out on each other when the problem is much larger than us. The U.S. has a terrible culture for arts creation, though many are trying to make it better. I’m painting with a broad brush for the sake of brevity, but I do feel that if the U.S. culture didn’t seek to cut arts in the classroom (Band was just cut from Atlanta public schools!) and if we destigmatized the arts as an adult profession, we would be less prone to either belittle or attack other folks who serve a different function within our world. So, there’s what I’d change: our entire hegemonic ideology! Or, I’d buy everyone a beer. Because I think we could all use a Cold One.

A:  The usual suspects, along with my teachers at Highland Central Schools, Dutchess Community College, SUNY New Paltz, The Actors Studio Drama School at The New School (I graduated in 2003), and Louisiana State University. One of my heroes is Jeff Baker, the Technical Director at Dutchess Community College. When I was a student, I remember how faculty or guest directors would pressure him to build The Greatest Set Ever in The Shortest Amount of Time. Jeff would reply, “you can have it fast, you can have it good, you can have it cheap; pick two.” I loved that. It taught me so much about producing. Of course, years later I returned as a teacher and had the pleasure of hearing him say it to me. Fast, Good, Cheap. Pick two.

Two of my other theatrical heroes (that I know personally) are Neal Bell, who has taught me more than anyone else that I am a writer. I was a student of his at the Actors Studio Drama School (he now teaches at Duke). He remains my mentor and friend. Leslie A. Wade, also a playwright (though better known as a scholar) is another personal hero. His writing is sensitive, rich, and poignant. He was my dissertation director at LSU (he now teaches at the University of Arkansas Fayetteville), and I could not have imagined a better match. It is my dream to one day have the three of us in a room together.

My first big hero that I have yet to meet is Tom Waits. Although I did do shows in Grammar School (I was a Minute Man at Lexington in fourth grade), it was really listening to Tom Waits’s performance of his soundtrack for The Black Rider that made me realize this is what I want to do with my life. Here we are over twenty-two years later. So far, so good!

I’m an amateur audiophile (I get this from my Dad). Most of my plays have a score in my head. There’s something about a great song. It resonates within, and if you close your eyes, you can hear it inside you. Like a tiny tuning fork. That’s more or less where I write from, the elusive noise within. Music gets me there.

Theatre scholars are my heroes, too. I love that I get to live in a world where we talk about the philosophy of performance, and the philosophy of creating performance. Someone once said that when we sit together in a theatre, we are living together, we are dying together. The ephemeral nature of live performance (and life in general) resonates with me, and it’s wonderful to be in conversation with folks who agree (if only on that point!).
Q:  What kind of theater excites you?

A:  I love theatre that surprises me. I love theatre that nourishes me. I love the language-based writers: Len Jenkin, Charles Mee, Maria Irene Fornes. They are incredibly brave with words and imagery. I’m dying to see something by 1927, a multi-media theatre company. Look up their advertisements for The Animals and Children Took to the Streets. It’s incredible! I adore the work of Robert Wilson, Conor McPherson, Carson Kreitzer, Tom Stoppard (particularly Rock’N’Roll), Sarah Ruhl; and the incredible Geek Theatre movement that started downtown and has now spread across the country. I’m also really excited to work with students. When you’re an academic, you get a first row seat to where theatre is heading. George Pate, Angela Hall, Caity Johnson, Tifany Lee, IB Hopkins, Weldon Pless, William N. Dunlap, Molly Pease; the list goes on. I also love playwrights’ collectives. 13P set the bar high for the rest of us who self-produce. I’m hoping to get to DC to check out some of the work of The Welders.

A:  Surprise yourself. Write bad plays. Imagine the worst thing that could happen in your script, and make it so! This has helped me out of a few jams. Keep a dream journal. Make mistakes, get messy. Find a community. Build trust. Build relationships, not because these relationships will lead to development and production opportunities, but because writing is a human act. So, be involved with humans. Avoid people who will tell you how to turn your creativity into money, especially if they charge a fee. Work for free on indie plays and movies; this is how previous generations got their start. Be available. If someone is down, listen to them. You need not respond. If you’re down, find someone who will listen (and who need not respond). Don’t measure yourself by the success of others. Celebrate their victories, truly and honestly. You can make the world a better place by being a part of a local community. You can make the theatre stronger by being a good witness, by leading by example. If you get married, everyone will give you advice; ignore their advice. Fall in love. Hang in there. Keep on keeping on.

I have a playwriting textbook, Inciting Incidents: Creating Your Own Theatre from Page to Performance. It can be purchased here: http://www.amazon.com/Inciting-Incidents-Creating-Theatre-Performance/dp/1465265880/ref=sr_1_1?ie=UTF8&qid=1439301745&sr=8-1&keywords=Inciting+Incidents+creating

Also, keep an eye on Rising Sun Performance Company in NYC, where I serve as resident writer and literary manager. We have some great things in the horizon: www.risingsunnyc.com