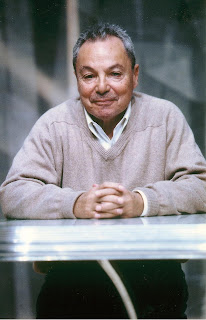 Hometown: Brooklyn NY, and I grew up part time in the Catskills

Q: Tell me about The Gary Plays.

A: THE GARY PLAYS are a series of plays I wrote about experiences I had in living my life in Los Angeles. They are mostly based on real events. I was also experimenting with theatrical form, including the modern use of the "chorus” and other technical issues, such as entrances and exits and transitions. Each play is a different theatrical and writing experiment, as well as a recounting of Gary’s events as he mourns for his dead son, Danny, shot and killed by accident in Griffith Park. I wanted to be as lyrical as I naturally am as a playwright and include as much as I could of my own author’s voice, directly to the audience. Begun in the ’90s, it seems to uncannily predict events, political and otherwise, in the present.

A: I am re-writing an older play of mine as a novel. TRUE CRIME STORY. Very challenging. Just finished three new plays: MAYAKOVSKY AND STALIN, SAYER, and THE WATCHERS.

A: Two things: the primacy of text, and the training of actors in the understanding of that premise. Naturally, we also need an audience, and an understanding of theatre as a medium quite different than movies and television or anything else.

A: My heroes were the Absurdists: Genet, Beckett, O’Neill. Ralph Cook of Theater Genesis in New York was responsible for my learning the art form and encouraging me to stay with it.

A: My advice is to hook up with a theater and do plays. Best way to learn. An example of the ideal learning experience for young writers was THE PADUA HILLS PLAYWRIGHTS FESTIVAL that I founded here, which put on new plays, held classes, and could talk intelligently about the art form.

A: Open Fist’s production of THE GARY PLAYS is going to be an epic, mammoth event! Come see it over the course of three evenings — or view all six plays on a single Sunday starting at noon. May 4 thru June 4 only! www.openfist.org.